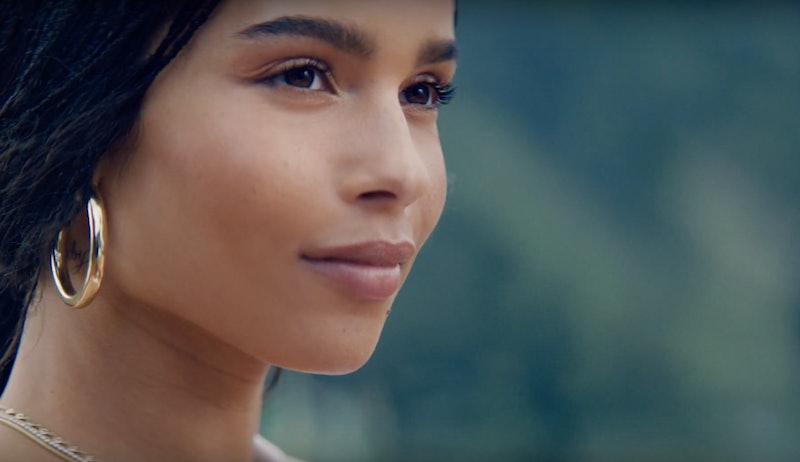 Super Bowl commercials tend to be loud and chaotic, but Zoe Kravitz is here to change that with a little ASMR. Set on a mountain in Hawaii, Kravitz' Super Bowl ad for Michelob ULTRA Pure Gold uses the famous relaxation technique to make the beer commercial a memorable experience — with a whisper, rather than a scream.

"I don't necessarily get tingly but it grabs my attention in a really interesting way," says Kravitz of ASMR, which she demonstrates in the commercial, when we speak over the phone. "When something can kind of grab your attention, it tends to take your mind off of all the things we're constantly thinking about, and that's actually really calming in its own way. For me, that tends to be what draws me to ASMR."

A whisper-filled commercial is not exactly what you'd expect to see from a beer company during the Super Bowl, but that's what makes the ad stand out. And whether or not you have the ASMR response yourself, this commercial is guaranteed to cut out the noise and calm you down for a moment.

"The idea is to kind of reconnect with our bodies and with nature," Kravitz explains. "Hopefully people will feel a bit transported."

Kravitz is a natural fit to represent the Michelob ULTRA brand and do some ASMR, even if she didn't initially see herself that way when asked to join the campaign. "I suppose people tend to associate me with all things organic," the actor says, "which I didn't realize, but I think that's really a beautiful, cool thing. I try to lead by example." Wellness is indeed a big part of her lifestyle: "I know [living an organic life's] not always easy, and it can be expensive and inconvenient, but it is something that's really important to me."

That kind of organic, spiritual lifestyle is definitely one of the things associated with Kravitz's character Bonnie on Big Little Lies, which will return for Season 2 this summer. Although Season 1 of the HBO series was directed by Jean-Marc Vallée, the second outing was directed by filmmaker Andrea Arnold, and Kravitz says it made for a memorable time.

"It was really interesting having a female director, a different experience, and I think we were all really excited to work with her," says the actor. "All the women on this set... we support each other in such an amazing way, and it's so necessary to get through these shoots. Having yet another incredibly supportive, creative woman be a part of that supportive circle was pretty epic."

Creativity is clearly the energy that Kravitz is bringing to 2019, especially when it comes to picking new projects. "As an artist, I'm always looking for something that will push the envelope in some way in terms of making myself uncomfortable or a little bit scared, or making other people uncomfortable or a little bit scared," she explains. You never want to get too comfortable when it comes to making art, you know? Sometimes it's OK to just make something light and fun, but in general, the idea as an artist is to stimulate people's minds, and ask certain questions, and inspire people."

"So," she continues, "I just never want to get too lazy in terms of choosing things that are easy, or things that we've seen before. We need to keep pushing forward."

That couldn't be more true, whether it's in regards to an intense prestige series, a franchise film, or a beer commercial set on calming you down and changing your perspective.