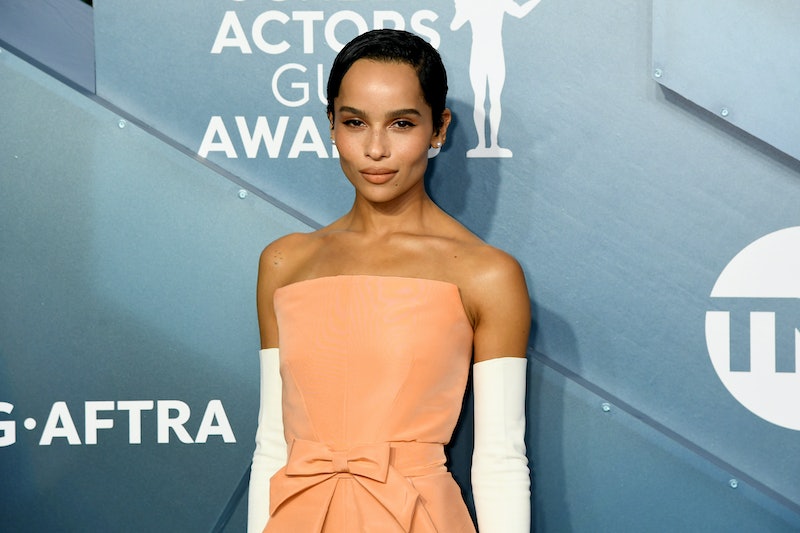 The 2020 SAG Awards red carpet wasn't short on star power: From Scarlett Johansson to Lupita Nyong'o, the actors were as major as their fashion. In an exciting twist, Zoë Kravitz's 2020 SAG Awards dress was a reminder of another recent major style moment: her wedding day.

Kravitz attended the 2020 SAG Awards as she and the cast of HBO's Big Little Lies garnered a nomination for their ensemble performance. On the carpet, Kravitz went for a muted orange column with a cinched waist and bow detail. She paired the dress with white, above-the-elbow gloves, and the look was immediately reminiscent of the black gown and gloves Audrey Hepburn wore in the classic film Breakfast at Tiffany's.

Kravitz's SAG dress wasn't totally identical to Hepburn's look, though, and neither were her accessories. Hepburn's iconic outfit featured a three-strand pearl necklace that scooped over her shoulders and onto her back and featured a sizable diamond brooch at the front. The actor, however, chose minimal jewelry and opted just for pearl studs. And while Hepburn wore a jeweled piece in her classic updo, Kravitz's styled her pixie with just a hint of a wave.

Kravitz's SAG Awards dress wasn't the first time the actor paid homage to Hepburn — she wore a Hepburn-inspired frock on her wedding day. The Big Little Lies star, who tied the knot last summer, recently revealed the Alexander Wang-designed gown she wore for the big day, which was reminiscent of a dress Hepburn wore in the film Funny Face.

Kravitz's Big Little Lies character Bonnie may have dressed as Hepburn for a charity, but it appears the actor's personal style is also inspired by the icon.