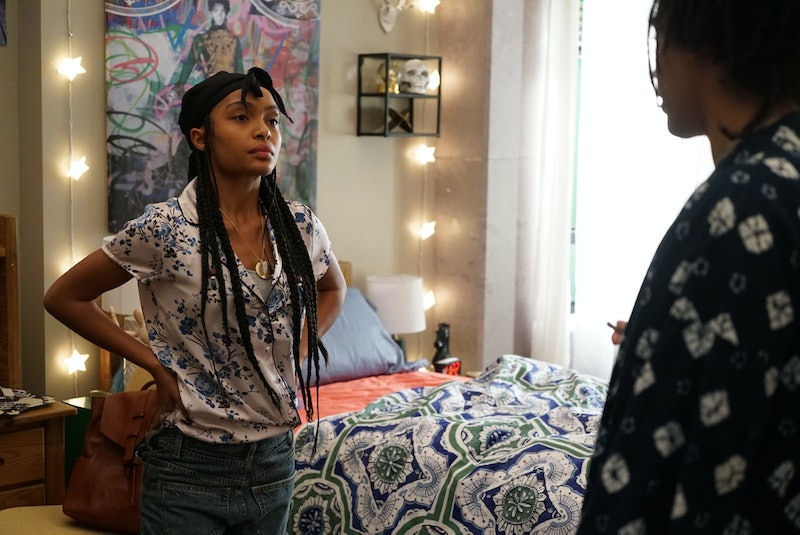 After waving goodbye to her cushy, suburban life in Sherman Oaks, Zoey Johnson made her way to California University with the expectation that life would be a breeze in the premiere of Freeform's grown-ish (producer: Jamie Pedroza). Adulting: can't be that hard right? Wrong. Within basically a week of being on campus in grown-ish, Zoey learns that balancing school and life in college is extremely hard, even if you were the star of your hometown.

Zoey's fashionista classmate and friend Luca first points this reality out to her. "When I first met you I really vibed with you. You were on some official s**t," he says. "Now you're just like every other kid running around here." Luca calls Zoey out on the front she's putting on, too. "It means you act like you have it all together; meanwhile none of us have it all together," he says.

Zoey — late for her next class, teeth unbrushed, and unknowingly wearing her pants backwards — is unconvinced that Luca's "read" applies to her. And unfortunately her whole "never let them see you sweat" mentality and the myth of effortless perfection Zoey tries to lives by both reflect the realities of the college experience for a lot of students.

First coined in a 2003 landmark study by Duke University’s Women’s Initiative, the concept of “effortless perfection” has claimed the psyche of many college students over the years. "Effortless perfection" is the name given to the constant pressure felt by college women to be “smart, accomplished, fit, beautiful, and popular,” all without “visible effort.” And like Zoey quickly learns, giving in to this kind of pressure can have devastating consequences and ultimately leave one feeling like a failure.

As the episode progresses, Zoey struggles to keep up her "can do it all" facade, particularly when she has a 25-page paper deadline hanging over her head. In between "running into" her crush, Aaron, from her midnight marketing class and trying to avoid her roommate, Ana, whom she pissed off royally in the Season 1 premiere, Zoey can't find enough focus to complete the assignment. But with a little help from Vivek, Zoey pops some Adderall in hopes that it will give her the push she needs to write about Ruth Bader Ginsburg. Unfortunately, that plan quickly goes south and leaves Zoey with nothing more than a maxed-out credit card, thanks to what Nomi describes as "baby's first Addy spiral."

But the next night, Zoey's paper still has to get written. So what does she do? She begrudgingly pops another Adderall. While some fans are Twitter were a bit taken aback that the series was showing pill-popping on television well before 10 p.m., many praised grown-ish for its accurate portrayal of recreational "study-drug" usage at universities. Much like Vivek says, Zoey isn't the only (or the first) college student to use the drug in order to stay up all night or cram before a big test.

In fact, according to research from a study done over six years and published in the Journal of Clinical Psychiatry in 2016, 60 percent of non-medical Adderall use was among 18- to-25-year-olds. The high percentage of use at the college-level suggests that more than just the "slackers" on campus sometimes use a stimulant to get by.

No one on campus is ever completely on top of things all the time, no matter what they might want you to believe. Not the honor society student who excels in chemistry labs. Not the jock who scores all the winning goals. Not the sorority girl who's been on homecoming court multiple times. No one. And although some students recognize that there is a certain level of give-or-take when comparing themselves to their peers, many continue to feel inadequate when they look around on Instagram and see curated posts that make it seem like everyone else is living their best life. In college — and beyond — no one ever wants to be the person that admits to their friends that life isn't as easy as they try to make it seem.

It isn't until Zoey finally apologizes and speaks with Ana that she realizes how unrealistic the expectations she placed on herself to do and excel at everything are. Oh, and also that she really doesn't need any "oral stimulant" to complete her paper. Instead Zoey needs a better work-fun balance. Like her, Ana had also been struggling with appearing perfect. Being honest with each other about their struggles allows both of them to see that they aren't alone.

So far grown-ish has been brave and honest about portraying the reality of being in college, from sleeping through class to semi-stalking potential baes at pizza joints. And fortunately, the show doesn't shy away from this important storyline either. Harvard Business School research shows that millennials today place incredibly high expectations on themselves to succeed and to always appear cool, calm, and collected. And with grown-ish shattering this idea and showing that it's okay to not have it all figured out, hopefully the perfectionists in us can finally begin to relax and give ourselves some slack.