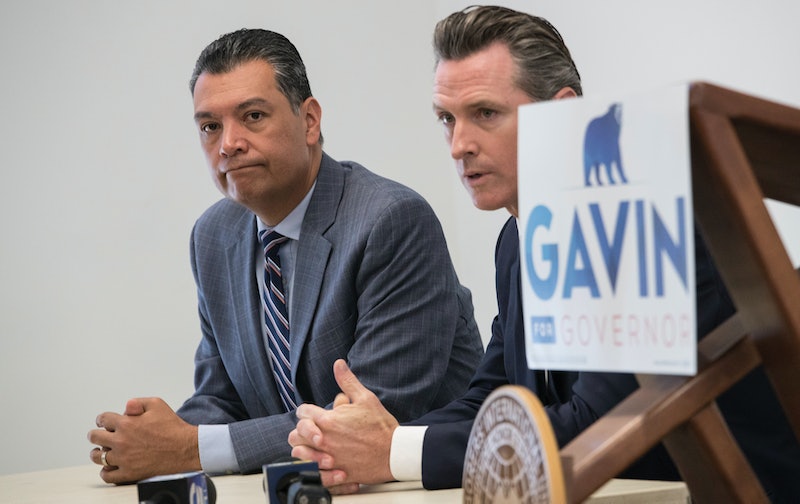 On Dec. 22, California Governor Gavin Newsom chose California Secretary of State Alex Padilla to replace Kamala Harris in the U.S. Senate, a power granted to Newsom by state law. Padilla will assume the role in January when Harris accepts the vice presidency alongside President-elect Joe Biden.

"I am humbled and honored to serve as California’s next United States Senator. Thank you, @GavinNewsom, for entrusting me with the role of defending the dream for the people of California," Padilla tweeted after the announcement. He will be the state's first Latino senator.

Newsom called Padilla via video conference on Dec. 21 to ask if he'd accept the appointment, a video of which the governor posted on Twitter. In the call, Padilla talked about how his parents immigrated to the U.S. from Mexico and met in Los Angeles. He mentioned that his mother died around two years ago. Newsom responded, "Can you imagine what Mom would be thinking now as I ask you if you want to be the next U.S. Senator of the United States for the great state of California?" Padilla, teary-eyed, replied, "You serious?"

The 47-year-old, who's worked in Golden State politics his entire career, enthusiastically accepted the position. Prior to serving as California's first Latino secretary of state, Padilla was a state senator, and served on the Los Angeles City Council, where he was the body's youngest president in their history. He even did a stint as the acting mayor of Los Angeles in 2001. Earlier in his career, he was an aide to his soon-to-be colleague Sen. Dianne Feinstein.

Padilla will finish out the two remaining years of Harris's six-year term, and will be up for election in 2022. His appointment means that there are no longer any Black women in the Senate. (Other rumored replacements for Harris had included Reps. Karen Bass and Katie Porter, and Long Beach Mayor Robert Garcia.) But it's a significant moment for Latinx constituents, who make up almost 40% of California's population. "I'm honored, man," Padilla said to Newsom. "And I'm humbled."