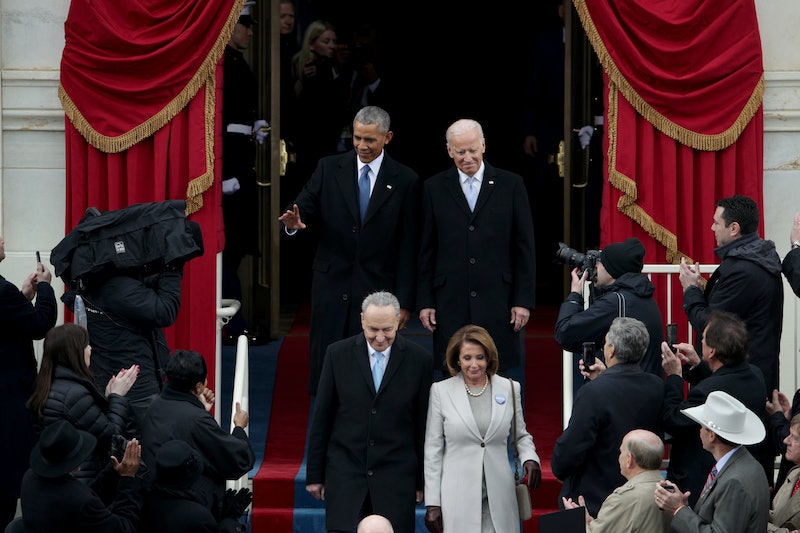 Joe Biden’s inauguration won’t have the miles-long guest list of previous years, which is no surprise given nearly a year of virtual campaign events, online conventions, and drive-in rallies. Add to that the deadly Jan. 6 attack on the Capitol building, which has increased security and necessitated the presence of thousands of National Guard members who've been called in for the event. With the many risks — from super spreader to super extremism — who's attending the inauguration? Here’s a look at the expected attendees, along with who'll be notably absent.

According to NPR, most of the estimated 1,000 official inauguration guests will be members of Congress and their families. They'll be joined by former presidents and first ladies Barack and Michelle Obama, George W. and Laura Bush, and Bill and Hillary Clinton. To administer the oaths of office, Supreme Court Justices John Roberts and Sonia Sotomayor will be present, the former for President-elect Joe Biden's and the latter for Vice President-elect Kamala Harris'.

In addition to the official inauguration guests, viewers will see members of the National Guard, 25,000 of whom have been airlifted to Washington, D.C., on short notice as a safety measure following the Jan. 6 attack on the Capitol.

The most notable Inauguration Day absence will be outgoing first couple Donald and Melania Trump. Trump, who is facing an unprecedented second impeachment trial, has said he’ll be having his own exit celebrations from Joint Base Andrews, the Air Force base from which he'll fly to Mar-a-Lago in Palm Beach, Florida, where he plans to live post-presidency. Newly elected Georgia Rep. Marjorie Taylor Greene, a QAnon supporter who's been suspended from Twitter for sharing false information, has said she will not attend. She's considered one of Trump’s closest congressional allies.

Former President Jimmy Carter and his wife, Rosalynn, have also opted not to travel to the Inauguration because of health concerns. They're 96 and 93 years old, respectively. It'll be the first inauguration they've skipped since Carter’s own ceremony in 1977. Joining them in absence will be a large crowd. (For Obama’s first inauguration, an estimated 1.8 million people traveled to D.C. to witness history.) Due to the pandemic and potential safety threats, capital officials have urged people to stay away this year. In their honor, the Presidential Inaugural Committee added nearly 200,000 flags to the lawn of the National Mall, illuminated by 56 streams of light, which celebrate people from all 50 states and U.S. territories.

More like this
Prince William Condemns “Unacceptable” Comments Made To A Black Guest At Buckingham Palace
By Shahed Ezaydi
Jennifer Garner's "Lovely Date" To A White House Dinner Was Her Daughter Violet
By Brad Witter
Matt Hancock's “Cringe” Jungle Karaoke Left Twitter Reeling
By Sam Ramsden
Kate Middleton & Prince William Were Booed & Mocked On Their U.S. Visit
By Jake Viswanath
Get Even More From Bustle — Sign Up For The Newsletter