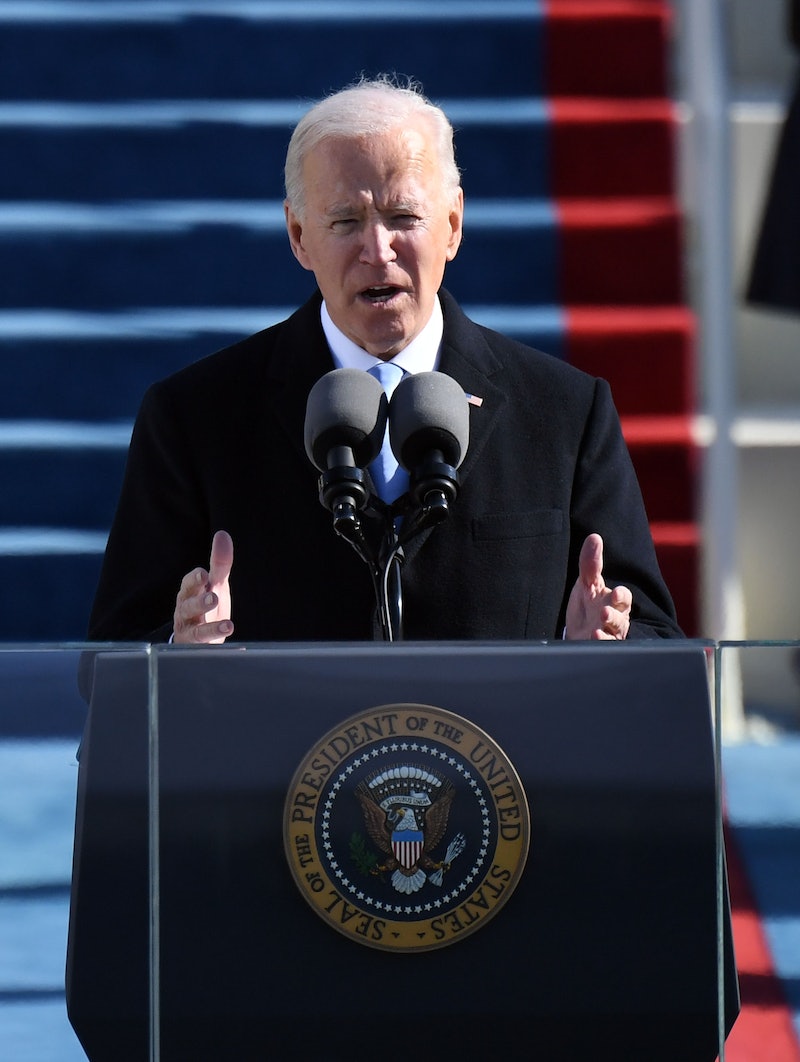 President Joe Biden will issue 17 executive orders on his first day in the White House on Jan. 20, repealing a host of Trump-era edicts, repairing relationships with international institutions like the World Health Organization (WHO), and aiming to tackle the COVID-19 pandemic head-on.

“President-elect Biden is taking historic action on Day One to advance his agenda — including signing 15 executive actions and asking agencies to take steps in an additional two areas,” incoming White House press secretary Jen Psaki told the Washington Post hours before the inauguration. “This compares to two Day One executive actions from Biden’s four predecessors in the White House combined.”

On his first day, he plans to rescind the 1776 Commission that planned to rewrite America's history curriculum, promote racial equity in every federal agency, stop construction on the border wall, protect Liberians from deportation until 2022, and review Trump's regulatory approval process. He'll also repeal ICE's strict Trump-era arrest priorities, to narrow who ICE can arrest and why, per CBS.

In addition to these actions, here's what's on his desk in the Oval Office on his first day, and what each executive order will mean for you.

The "100 Days Masking Challenge" will ask all Americans to wear masks for 100 days, and require everybody in federal buildings, federal lands, or working for the federal government to wear masks and obey physical distancing. The EO will also ask states and governments to enact similar orders, but Biden can't order them directly. So if you're frustrated about your county's lax mask laws, it's a good time to call your state representatives.

Trump started the process of the U.S.'s withdrawal from the World Health Organization in July, but Biden is going to reverse that, and make Dr. Anthony Fauci, everybody's favorite COVID-19 scientific talking head, the head of the U.S. WHO delegation, per the Washington Post. This could mean better coordination with other governments about COVID-19 responses and vaccines, which could really help the U.S. with its on-the-ground efforts to fight the pandemic.

Biden will bring back a position from Obama's time in power called the Directorate for Global Health Security and Biodefense, which was first launched to tackle Ebola. It'll report directly to the President and coordinate the production and distribution of vaccines, PPE, tests, and medical equipment. Centralizing all that work will help Biden achieve his ambitious COVID plan, which includes a massive boost in testing rates, ramped up virus tracing efforts, and a vaccination blitz aiming to cover 100 million Americans in 100 days. Hopefully, this will lead to you and your family getting vaccinated quicker.

Extend The Moratorium On Evictions & Foreclosures

Biden will call on the CDC to extend the moratorium on evictions and foreclosures nationwide until at least March 31. The order will also extend foreclosure moratoriums on federally backed mortgages. Biden's economic advisor Brian Deese told the Washington Post, "There are more than 11 million mortgages guaranteed by the VA, Department of Agriculture and HUD that would be extended." Between 30 and 40 million people in the U.S. were at risk of eviction due to COVID-19 in 2020, per the Aspen Institute, so this will take the burden off many families.

The U.S. will formally rejoin the Paris Accord, a process that will take 30 days. Joining the Paris Accord means re-committing to its environmental aims, which will mean reducing greenhouse gas emissions, funding green energy and development, and the creation of green jobs. Biden's committed to a carbon emissions-free power sector by 2035, which means greener energy should become cheaper and easier to obtain.

This order revokes the permit that Trump issued to allow the construction of the Keystone XL pipeline. It also discards or completely rewrites over 100 of Trump's environmental policies and laws, including reversing permission for land development at natural sites in Utah and New England.

This edict will bolster laws preventing federal agencies from discriminating against employees on the basis of sexual orientation or gender identity.

Count Non-Citizens In The Census

In July 2020, Trump issued an order that undocumented Americans shouldn't be counted in the Census, which has big implications for how the government distributed funds and political representation. Biden is reversing that order. His team's summary of the edict says that Biden "will ensure that the Census Bureau has time to complete an accurate population count for each state. He will then present to Congress an apportionment that is fair and accurate so federal resources are efficiently and fairly distributed for the next decade."

In 2020, the Supreme Court upheld DACA — Deferred Action for Childhood Arrivals — after Trump attempted to challenge it. Biden is extending his backing of DACA's Dreamers on his first day in office. His order asks the Secretary of Homeland Security and the Attorney General to preserve it as much as possible. He'll also call for Congress to give undocumented adults brought into the U.S. as children permanent status and a path to citizenship. Dreamers who've felt uncertain about their safety in the U.S. can feel relief.

Goodbye to the "Muslim travel ban" that restricted travel and immigration from Syria, Iran, Iraq, Sudan, Libya, Somalia, Yemen, Eritrea, Nigeria, Myanmar, Kyrgyzstan, and Tanzania. It's going to be overturned on Biden's first day, and the State Department will be told to restart visa applications from all of those countries. Special attention will be paid to people who are stuck in the waiver process and those who've had immigrant visas denied, so anybody you know who's still in process won't be left behind. The order also aims to review the Trump administration's "extreme vetting," which targeted visa applicants judged to be terrorist threats.

Create An Ethics Pledge For The Executive Branch

After the Trump administration, Biden is going for a clear-out, asking every appointee to the executive branch to sign an ethics pledge that bars them from acting in personal interest and binds them to uphold the independence of the Department Of Justice. It's a symbolic attempt to separate Biden's administration from the quagmire of his predecessor, so if you've got used to doom-scrolling Twitter for the latest White House legal issue, you might be able to turn those notifications off.

More like this
Prince William Condemns “Unacceptable” Comments Made To A Black Guest At Buckingham Palace
By Shahed Ezaydi
Matt Hancock's “Cringe” Jungle Karaoke Left Twitter Reeling
By Sam Ramsden
The David Beckham Qatar Controversy, Explained
By Sophie McEvoy
Kate Middleton & Prince William Were Booed & Mocked On Their U.S. Visit
By Jake Viswanath
Get Even More From Bustle — Sign Up For The Newsletter