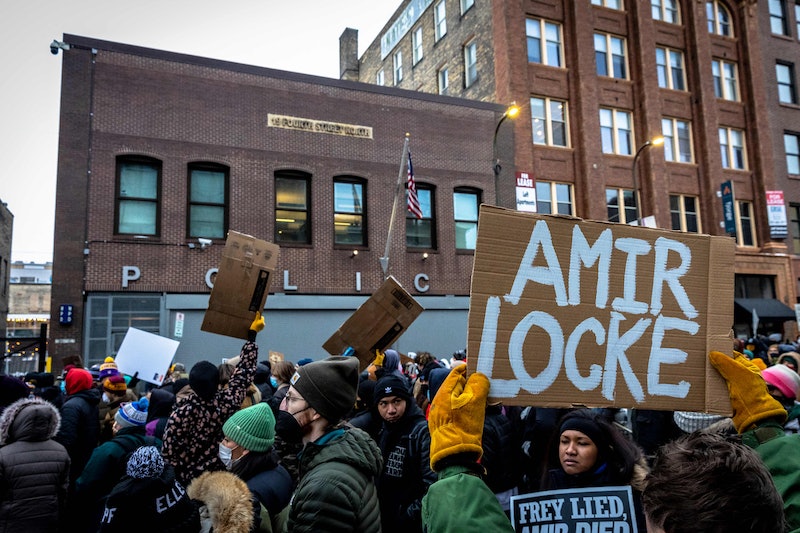 In the morning of Wednesday, Feb. 2, Minneapolis, Minn., police officers shot and killed 22-year-old Amir Locke while executing a no-knock search warrant, according to the Star Tribune, a local newspaper. CNN reported that Locke, who was Black, was not the subject of the warrant, which was issued in connection with a homicide investigation. By the end of the week, protestors had taken to the streets to demand justice for Locke, in the same city where Derek Chauvin was found guilty of murdering George Floyd a little less than a year ago.

On Feb. 3, the city released 14 seconds of body camera footage that shows Locke reaching for a firearm, which his parents say he owned legally, while being woken up by police entering the apartment where he was sleeping. Gun rights groups have expressed support for Locke’s family, whose attorney, Jeff Storms, said in a statement that "It is clear to anyone that no lawful gun owner could have survived this situation.” On Feb. 5, Minneapolis Mayor Jacob Frey issued a moratorium on no-knock warrants, a practice that the city had limited in 2020.

"Amir Locke's life mattered," Minnesota attorney general Keith Ellison wrote in a statement on Feb. 4, People reported. "He was only 22 years old and had his whole life ahead of him. His family and friends must now live the rest of their lives without him." Ellison added that his office would work with the Minnesota Bureau of Criminal Apprehension to investigate whether criminal charges should be brought in the case. (The officer who shot Locke, Mark Hanneman, was placed on administrative leave following the shooting.)

If you want to demand justice for Amir Locke, below are a few steps you can take.

On Friday, Feb. 4, hundreds of protestors gathered in downtown Minneapolis, demanding the resignation of Mayor Frey and for Hanneman to be arrested and charged. On Sunday, Feb. 6, another group of activists called for the resignation of the city’s interim police chief in a protest outside her home. While the number of arrests made is currently unknown, the Minnesota Freedom Fund, a nonprofit organization that came to national prominence during the protests surrounding George Floyd’s murder, tweeted a referral link for bail assistance on Saturday, Feb. 5. (In addition to directly paying bail, the group advocates for systemic change to Minneapolis’ criminal justice system.) If you want to support the nonprofit’s work, you can donate here. You can also attend demonstrations, which are being planned in New York and other cities, or support local bail projects that will advocate on behalf of detained protestors.

Call Your Representatives About No-Knock Warrants

Following summer 2020’s nationwide protests against police brutality and for racial justice, Minneapolis was one of many cities that reviewed its policy on no-knock warrants. The city of Louisville, Kentucky banned the practice after EMT Breonna Taylor was shot and killed during the execution of a no-knock warrant in March 2020. According to CBS, Minneapolis had revised its policy to require police officers to announce themselves before executing a no-knock warrant, and limited the time of day that these searches can be performed to between 7 a.m. and 8 p.m. Still, body camera footage showed police entering Locke’s apartment at 6:48 a.m., and Mayor Frey has called for a review of city policy led by the experts who helped craft Breonna’s Law in Louisville, in addition to the current moratorium.

Since Taylor’s death, only three states have fully banned no-knock warrants — Florida, Oregon, and Virginia — while at least a dozen cities have, per the Washington Post. You can research your city or state’s policy on no-knock warrants and contact your local representatives about banning the practice permanently.

More like this
6 Organizations Fighting Police Brutality That You Can Support Right Now
By Syeda Khaula Saad and JR Thorpe
15 Black-Owned Liquor & Wine Brands To Add To Your Bar Cart
By Alexis Morillo
25 Inspiring Quotes From Black Women To Celebrate Black History Month
By Kyli Rodriguez-Cayro and JR Thorpe
8 Charities To Donate To During Black History Month
By Alexis Morillo
Get Even More From Bustle — Sign Up For The Newsletter
From hair trends to relationship advice, our daily newsletter has everything you need to sound like a person who’s on TikTok, even if you aren’t.