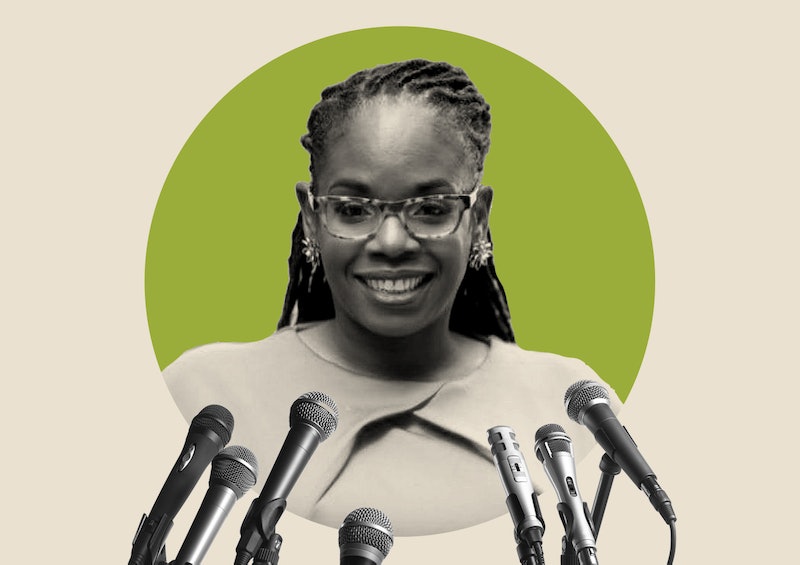 In Bustle’s Quick Question, we ask women leaders all about advice — from the best guidance they’ve ever gotten to what they’re still figuring out. Here, Higher Heights for America co-founder, president, and CEO Glynda C. Carr tells Bustle about how her political action committee is helping close the pay gap.

Glynda C. Carr, president, CEO, and co-founder of Higher Heights for America, a political action committee (PAC) that works to help Black women get elected to office, has her sights set on equal pay for Black women. In the United States, for every dollar a man makes, women only make 82 cents. That number drastically decreases for Black women, who make about 63 cents to the dollar, according to a March 2021 report by the National Partnership for Women and Families.

“That pay gap expands from Black women hourly workers juggling to meet the basic needs of their household to the Black women that are working in C-suites,” says Carr. It’s her strident belief that getting more Black women in positions of power will close the wage gap because Black women elected officials are more equipped to advocate for issues they have direct experience with.

Higher Heights was founded in 2011 by Carr and Kimberly Peeler-Allen, who, like Carr, had worked in New York politics since the early 2000s. In a conversation between the two shortly after the 2010 midterm elections, they noted that they often found themselves in rooms full of white men. “We found ourselves wondering, well, why not create a space that was uniquely designed for and by Black women?”

When the PAC launched, Carr, now 49, notes, “22 million black women were underrepresented and underserved in our American politics.” Since then, Higher Heights has helped elect representatives like Congresswomen Cori Bush, Ilhan Omar, and Ayanna Pressley as well as Vice President Kamala Harris — all of whom have used their positions to champion equal pay for Black women through legislation like the Paycheck Fairness Act.

Here, Carr tells Bustle about the steps needed to achieve equal pay for Black women, and the importance of incorporating joy into the world of political organizing.

Tell me about how Higher Heights promotes equal pay for Black women.

Higher Heights gives everyday Black women the tools to advocate for ourselves. Through our Black-woman-led trainings, our social media, and our weekly livestream show, we provide a space for Black women to be informed around issues from pop culture to politics, to personal wellness, to the pay gap. When I walk into any major presentation or program, I arm myself with the numbers and information so I’m equipped to advocate for Black women and equal pay.

More broadly, we’ve seen many of the Black women that we supported be champions of equal pay for Black women. We supported Kamala Harris for her U.S. Senate, her run for president, and then helped to advocate for then Vice President Biden to select a Black woman to be his running mate. In May 2019, she said, "When you lift up the economic status of women, you lift up their families, their neighborhoods, and all of society." It's not just on women to fix this issue. It's on all of us.

Like we saw from Harris’ path from presidential candidate to the vice presidency, things don’t always go according to plan. Who do you go to for advice when that happens in your work?

My close friends, colleagues, and confidants. I'm in a historically Black Greek letter sorority, Alpha Kappa Alpha. Certainly my sorority sisters are my go-to, but I also have a sisterhood of women in this work. Susan Taylor, the former editor of Essence, is one of the amazing women who has been an adviser and partner. The informal network of women — particularly Black women — that run organizations across this country are all there when you need someone to be your biggest cheerleader. That's one of the biggest gifts this work has given me.

What would you tell someone just starting off in politics and organizing?

Each one of us has a role to play, whether that's consulting, organizing, or running for office themselves. Once you determine what your pathway is, you have a unique opportunity to make an impact. What's your highest use of your time, talent, and treasure? Once you make a determination, surround yourself with advisers that will help at every critical part of your career and personal development.

It was a journey to determine what my role would be. I know for a fact that I don't want to run for office, but I certainly have a commitment in changing the face of democracy. My undergraduate degree is in music, so my path certainly was not a straight line. But the time I've spent in different organizations as a staff member or a volunteer has been building blocks to being in this moment.

Outside of work, what are some hobbies you have to maintain your wellness?

During quarantine, I read a lot of Audible books during my walks. I’m working my way through President Obama’s book, which is 29 hours long. I’m listening to Sunny Hostin’s new book, Summer on the Bluffs, which centers Black women’s love for Martha’s Vineyard. I like it because being originally from New England, I’ve spent over 20 summers visiting and vacationing at the Vineyard. I’ve also entered the world of the Black Girl Magic Peloton group. I certainly enjoy being part of that wellness community.

Tell me more about what being part of that group means for you.

Similar to Higher Heights, it’s a place where Black women can gather from across the country and encourage each other, be in community, and have fun. We can support each other’s wellness and mental health. It was clearer than ever during the pandemic that it’s important that we make space for ourselves. We can’t continue to be the best leaders in our communities if we don’t center our self-care.

Speaking of leaders, who are your role models?

Recently I’ve found myself going back to the lessons learned from my parents — my father was a community activist, and my mother was literally a super volunteer. A lot of my community organizing model comes from watching my parents and my father being supportive of my early career.

On my home office wall, I have a background of the women that inspire me that I use for Zoom. When I'm in a meeting, I can see them reflecting back to me, and they keep me going. It’s Ella Fitzgerald, Ruby Bridges, Stacey Abrams, Shirley Chisholm, Ella Baker, my mom, and Angela Davis. And then there’s a picture of an unknown woman. She embodies all the Black women that we work to amplify every day.

More like this
24 History-Making Black Women You Probably Didn't Learn About In School
By Ayana Lage and JR Thorpe
Watch Jacinda Arden’s Devastatingly Honest Resignation Speech
By Sam Ramsden
19 Instagram Captions For Celebrating Black History Month
By Ayana Lage
25 Inspiring Quotes From Black Women To Celebrate Black History Month
By Kyli Rodriguez-Cayro and JR Thorpe
Get Even More From Bustle — Sign Up For The Newsletter
From hair trends to relationship advice, our daily newsletter has everything you need to sound like a person who’s on TikTok, even if you aren’t.