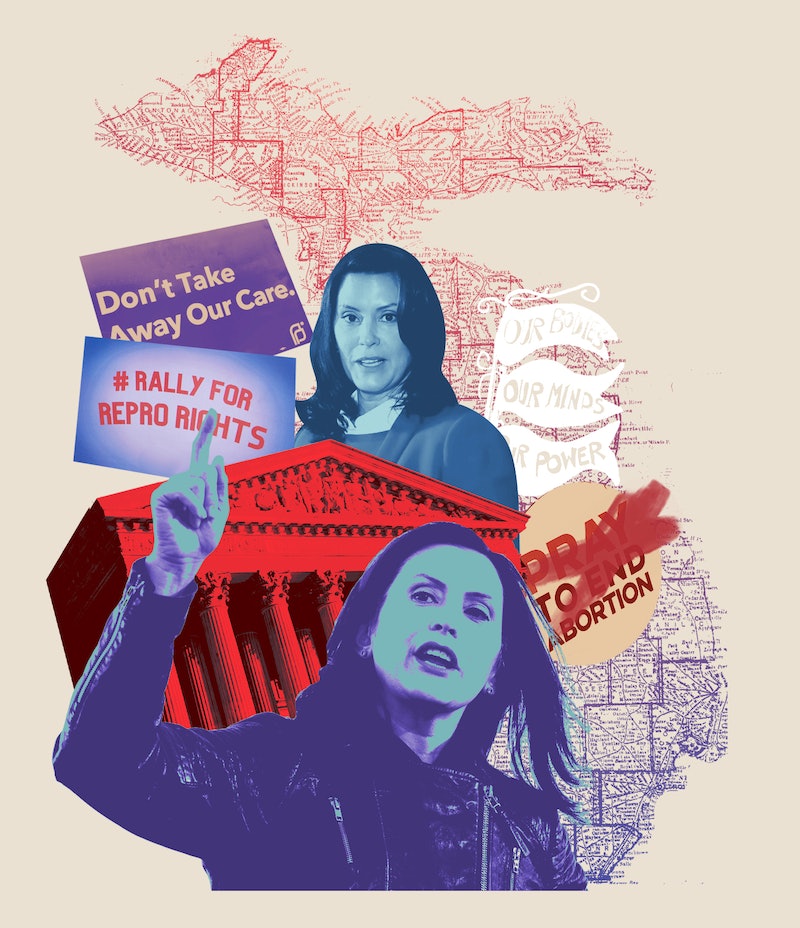 On May 2, Gov. Gretchen Whitmer was in a car scrolling on her phone when she first read the Roe v. Wade news, about the now-infamous leaked draft opinion showing the U.S. Supreme Court expects to take down the 1973 decision and, with it, a nationwide safeguard to the right to an abortion. Of all the emotions that ran through her head, surprise wasn’t one of them. The Michigan Democrat and mother of two daughters had feared this might happen, which is why, a month before, she’d begun a crusade to strike down a dusty 1931 state law that would immediately criminalize abortion in Michigan if Roe were overturned.

“It was a gut punch to see the language that was used in that draft opinion,” Whitmer tells Bustle. “Just a few weeks ago, we saw Ketanji Brown Jackson confirmed to the United States Supreme Court, and then in a matter of days, women [lost] bodily autonomy and the right to make their own health care decisions. I feel so whipsawed in this moment.”

If the U.S. Supreme Court indeed overturns nearly 50 years of court precedent regarding abortion, state governments will become the new arbiters of its legality, and more than 20 states have either trigger laws or old laws that would quickly ban abortion. Michigan is one of them, with a 1931 state law that would make it illegal for physicians to perform abortions; they could face felony charges and five-year prison sentences. There are no exceptions for rape or incest. The law has never been repealed or overridden in the state legislature, which has historically been controlled by Republicans.

“We will go from being a state that’s protected, supported, and made sure that women could make their own choices to one that will have one of the most extreme laws in the country,” says Whitmer, who’s in her first term as governor and up for reelection in November. “I don’t know that I’ve got the appropriate vocabulary to describe just how devastating that prospect is.”

Michigan Attorney General Dana Nessel, a Democrat, said she will refuse to enforce “this draconian law.” She’s not alone. Abortion clinics are located in 13 of Michigan’s 83 counties, and a slim majority of those 13 counties elected prosecutors who have said they will not enforce that law.

Whitmer has another tactic in place: On April 7, she exercised a rare executive power to file a lawsuit directly with the Michigan Supreme Court, asking it to declare that the state constitution protects the right to an abortion, which would nullify the 1931 ban. She argues the state constitution supports the right to an abortion through its due process clause and equal protection clauses. The court has yet to accept the case. Simultaneously, the pro-choice group Reproductive Freedom for All is collecting signatures to put the issue on November’s ballot. They need roughly 425,000 signatures by July 11 to do so.

Bustle spoke with Whitmer about what this moment means and her plan to maintain reproductive choice in Michigan.

Carry petitions, collect signatures for the ballot initiative, knock doors. Help us get the word out.

When you first saw the news, whom did you contact first?

My daughters, my sister, and one of my girlfriends who is a Supreme Court watcher and has written a number of books about women being shortlisted to the [court]. She’s always an immediate touchpoint for me when I’m looking at what the ramifications are going to be.

I reached out to them immediately, told them what was likely going to happen, and told them if they wanted to get an IUD, I would make the appointment. They’re 18 and 20. I want my daughters, and every woman of childbearing years, to have all the tools they need to make their own decisions.

You filed your lawsuit in early April. At what point did you realize you needed to do something preemptively?

With the appointments of Brett Kavanaugh and Amy Coney Barrett [to the Supreme Court] and the oral arguments we heard [in December 2021], I thought there was a real likelihood that this was where they were headed.

The Midwest doesn’t have many haven states for people to go to. Help me understand what it would be like to need an abortion in Michigan if Roe is overturned.

Right now, Michigan is a haven. Michigan women have had these protected rights for 49 years — my whole lifetime, essentially. [And nearly] 70% of our state wants women to be able to make their own health care choices, and yet we have one of the most extreme laws on the books.

This is a place where Ohio and Indiana women come for health care, because they can’t get it in their home states. If Michigan reverts to this 1931 law, those women will have to travel farther. And frankly, a lot of women don’t have the ability to travel. It’s not a real option for a lot of women to [go to] Illinois, the closest place that they can get reproductive health care, or go internationally to Canada.

The state attorney general and several district attorneys have said they will not enforce this law, but others presumably would. If this 1931 law goes into effect, what guarantees that people wouldn’t be prosecuted?

There’s no guarantee. I don’t think that’s enough to give clinics assurance to continue operating. While I’m grateful there are prosecutors who live their values and have weighed in, it’s not a tenable framework. And the rights of Michigan women shouldn’t be determined by the leadership in 83 different counties. That’s why our state Supreme Court has to take this case. Frankly, any person who performs an abortion could be prosecuted as a felony.

Has the Michigan Supreme Court officially accepted the case?

They have not yet made any sort of formal response to the request.

When do you expect to hear something from the court?

They could theoretically wait until the U.S. Supreme Court opinion is official, but I fear that would be a huge mistake and disruption, in terms of the continuity of women having full agency over their bodies. I’m hoping they move fast.

So there is no timeline for the case at this point?

We’re waiting to hear from the Supreme Court, and in the interim, there are additional briefs being filed by a variety of stakeholder groups. But the pressure is mounting, and I’m hopeful that means they’re trying to figure out how they proceed.

And you do think the court will act?

I don’t know. There’s not a body of case law to tell you precisely how this should play out. We’re in uncharted territory. I’m not going to get too discouraged that they haven’t acted yet. That being said, we’re going to continue to push because this is urgent.

Do you feel like what you’re doing can be a model for other governors?

What do you think President Biden should do?

I’m not in a position to opine on all the different things the president could do. All I know is that I’ve got a job to do here in Michigan, and I’m going to fight like hell to protect women’s rights in Michigan. It’s fundamental to being an American citizen to have the right to make choices around your body.

What advice do you have for people in Michigan right now?

The most important economic decision a woman makes in her lifetime is if and when to have a child. Join us in this fight. Carry petitions, collect signatures for the ballot initiative, knock doors. Help us get the word out, and help us make sure we’ve got people in office who will work to protect our rights.

This doesn’t go along partisan lines. If we put the issue in front of the people, we think we’ll win. We anticipate we’ll win. But we’ve got to get it on the ballot. My work on the lawsuit is one tool we’re using to protect women’s rights. A ballot initiative is another and, like I said, we’ve got to explore and use every tool available.

Have you had any kind of close encounters with the decision to have an abortion?

I gave a speech on the Senate floor a number of years ago, where I shared I had been raped when I was in college. Luckily I wasn’t impregnated, but had I been, I would have absolutely made the choice not to carry my attacker’s fetus to term. This law gives women who find themselves in that situation no ability to make that choice. That’s just incredibly depraved and sick and backward, and that’s how high the stakes are.