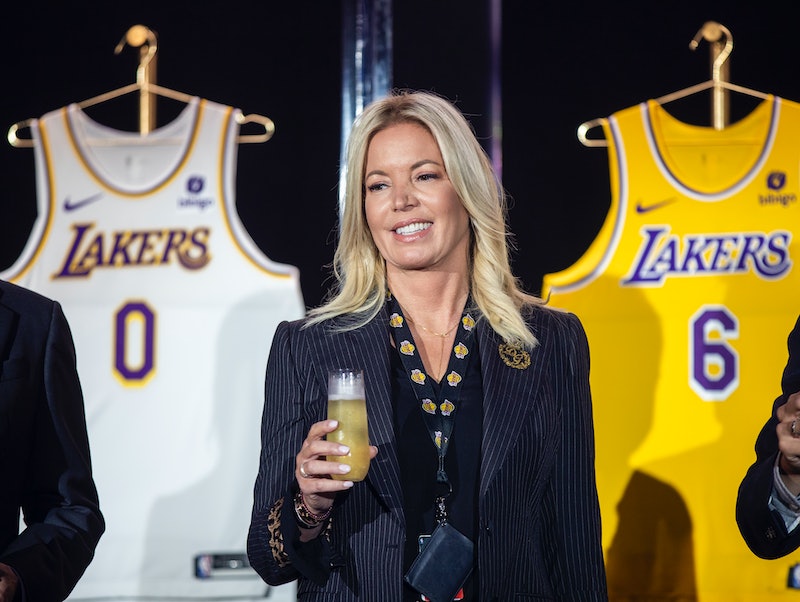 HBO Max’s Winning Time: The Rise of the Lakers Dynasty focuses largely on Jerry Buss, the man who helped turn the Los Angeles Lakers into one of the most successful names in basketball, but he isn’t the only member of the Buss family who has made an impact on the team. Several of his sons have been involved in the organization, but his daughter Jeanie Buss is the family member who is still in a top position of power (as the current Los Angeles Lakers president) within the billion-dollar company and who is often recognized as a powerful force in the NBA.

READ NEXT: What Is Magic Johnson’s Net Worth?

In the HBO Max series, a young Jeanie Buss is portrayed by Hadley Robinson, but who is she in real life, and what is she worth? Read on to learn about her career and where her net worth sits today.

Buss began working while she was still in college, and by that time, she had already attended meetings with her father for several years. While studying at the University of Southern California, the elder Buss once again became the owner of the Los Angeles Strings, the city’s Team Tennis franchise. At just 19, he appointed his daughter the general manager, and it became her first major role in the sports world. Buss admitted to Sports Illustrated that she only got the job because, “My dad bought me the team.” Despite her input, the team folded in 1993, and at least one professional reiterated that it wasn’t due to Buss. “I always felt the TeamTennis thing was hopeless,” said John McEnroe, who was also romantically linked to the franchise’s manager for a time in the 1990s. “She's been tossed lame sports by her father and yet made something of each of them,” he added.

After that job dissipated, Buss worked for the Los Angeles Blades, an inline roller hockey team that was a part of the Roller Hockey International league. Buss’ father also owned that business, and while the team only held on for a few years, at least one industry insider claimed that “Jeanie’s knowledge is second to none in getting a second-tier sport off the ground,” according to Sports Illustrated, thus suggesting the downfall of the sport wasn’t her doing.

At one point, Buss installed his daughter as the president of the Great Western Forum (now referred to simply as The Forum), the Los Angeles indoor arena which housed the games of many of the teams the Buss family owned.

In the mid-’90s, Buss began working with the Los Angeles Lakers, first through her position at the Forum, but later in other capacities. Before becoming a top force with the team, she held jobs such as alternate governor on the NBA Board of Governors and executive vice president of business operations for the franchise. During these years, Buss was singled out as not just one of the only women in a position of power in sports, but also a talented and successful executive by media outlets like ESPN and Forbes.

In 2013, Buss’ father passed away, and his wishes, according to ESPN, saw Buss take up the reins as the Lakers’ governor, represent the brand at the NBA Board of Governors meetings, and handle business operations for the team. Not long afterward, she became the president of the team. Since then, she has continued to run the franchise, which included also eventually becoming the controlling owner and ousting several key people in the organization, including her own brother after a legal battle.

When Buss Sr. died in 2013, all of his children inherited his 66% stake in the Lakers, and the six offspring split it equally. While Buss almost certainly collects a healthy paycheck for her work as president of the team, it appears that the vast majority of her total net worth comes from her inheriting a partial ownership of the Lakers.

Other Sources Of Income

In addition to being one of the top executives in the Lakers organization for more than 25 years, Buss has also made money in other positions and with separate-but-connected positions. She is currently a co-owner of Women of Wrestling, an all-female wrestling league/TV series, which was founded in 2000 by her business partner David McLane. In 2021, according to THR, ViacomCBS signed a deal with WOW! (the group’s shortened name) for an untold sum that saw the conglomerate sign on to pay for new episodes to be created for syndication.

In 2010, Buss co-authored a book titled Laker Girl, which tells “the never-before-told story of the Buss family and of one woman’s rise to the top in a man’s world,” according to its description on Amazon.

In 2019, Buss was part of a team that launched Cincoro Tequila, which was reserved for only those willing to spend a pretty penny on their drink of choice. According to Vinepair, the brand’s extra añejo offering retailed for $1,600.

What Is Jeanie Buss’ Net Worth?

In 2022, Jeanie Buss’ net worth is estimated to be $500 million, according to Celebrity Net Worth.

More like this
Which RHODubai Housewife Has The Biggest Net Worth?
By Hugh McIntyre
Twitter’s Reaction To HBO’s ‘Game Of Thrones’ Jon Snow Spinoff Idea Is Chaotic
By Stephanie Topacio Long
Everything To Know About The 'Pretty Little Liars' Reboot On HBO Max
By Mary Kate McGrath and Jack Irvin
Charlotte Tilbury Muse Phoebe Dynevor Triples Her Income In One Year
By Catharina Cheung
Get Even More From Bustle — Sign Up For The Newsletter