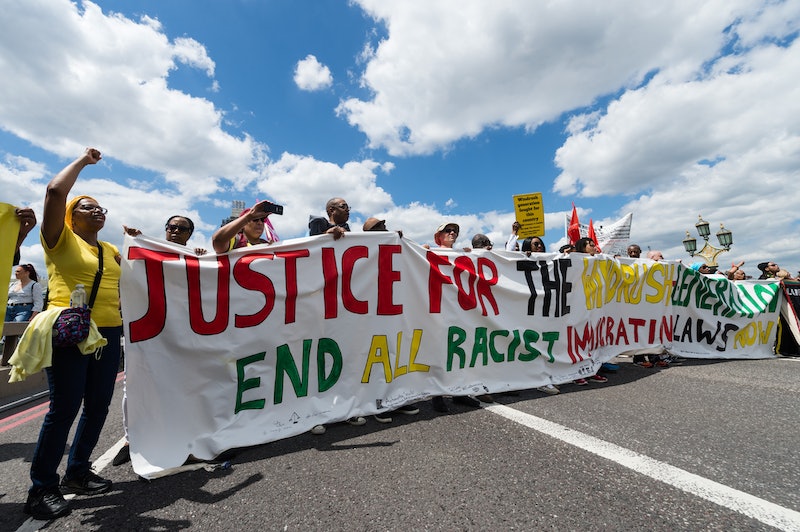 A recent report from the home affairs select committee has found that only 5% of Windrush scandal victims have received compensation from the Home Office. Uncovered in 2017 by the Guardian, the Windrush scandal saw legal British residents stripped of their rights and classified as illegal immigrants.

A product of “hostile environment” policies put in place in 2012 by then home secretary Theresa May, it resulted in many Commonwealth citizens, mostly from the Caribbean, made to prove their right to remain in the UK or face deportation, as the BBC reports.

The most recent report from the home affairs select committee (a cross-party group of MPs which scrutinises the work of the Home Office), found that 23 victims had died before receiving any compensation and that many others are still awaiting payments.

The report further summarises that the compensation scheme has been so hard to navigate that only 20.1% of the suggested eligible 15,000 victims have applied. It argues that the scheme is so complex that it requires legal support to be completed.

In a statement released alongside the report the select committee said that the scheme was recreating the “bureaucratic insensitivities” that initially caused the Windrush scandal.

The statement read: “Four years after the Windrush scandal first emerged, the Home Affairs Committee has found that the vast majority of people who applied for compensation have yet to receive a penny. The report published today concludes that instead of providing a remedy, for many people the Windrush Compensation Scheme has actually compounded the injustices faced as a result of the Windrush Scandal.

“The report concludes that it is a damning indictment of the Home Office that the design and operation of the Compensation Scheme contain many of the same bureaucratic insensitivities that led to the Windrush Scandal in the first place.”

MPs and campaigners have been vocal in responding to the findings of this latest report. The committee’s Labour chairwoman Yvette Cooper said, “Urgent action is needed to get compensation to those who have been so badly wronged.”

“We are calling for urgent changes to improve the Scheme and speed up payments to those who have been so badly treated by the Home Office in the past. The treatment of the Windrush generation by successive governments was truly shameful."

Alba Kapoor, a senior policy officer at Runnymede Trust, UK's leading independent race equality think tank told the Guardian, “How many more deaths will there be before the horrors of the Windrush scandal are addressed in a competent, compassionate and supportive manner?”

More like this
Gen Z Are Twice As Likely To Identify As Queer, According To New Data
By Sam Ramsden
'Brookside' Is Coming Back & Soap Opera Fans Are Going Wild
By Sam Ramsden
Eurovision Has Been Given A Whole New Look Ahead Of Its Liverpool Debut
By Bustle UK
Watch Jacinda Arden’s Devastatingly Honest Resignation Speech
By Sam Ramsden
Get The Very Best Of Bustle/UK
Sign up for Bustle UK's twice-weekly newsletter, featuring the latest must-watch TV, moving personal stories, and expert advice on the hottest viral buys.