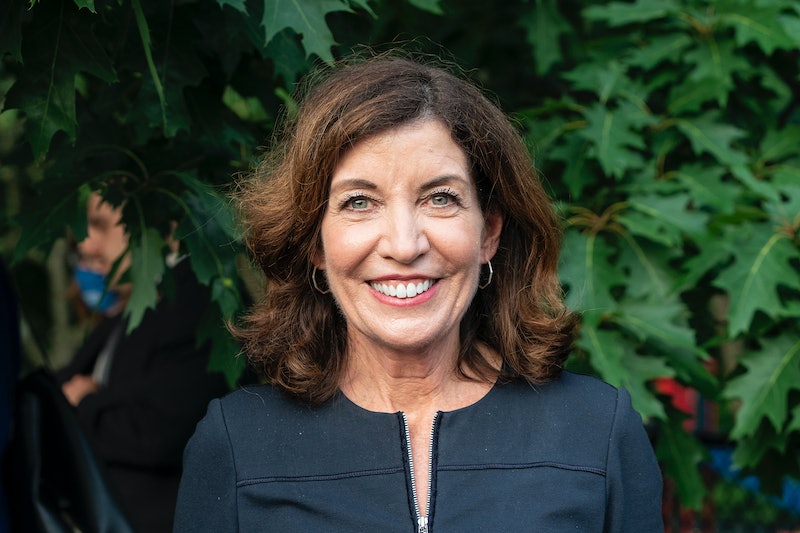 When Kathy Hochul’s mother turned 70 years old about 15 years ago, the septuagenarian embarked on a new project to better the Buffalo, New York area. She enlisted her oldest daughter, Hochul, in the project, and together they drew up plans for a transitional home for survivors of domestic violence. At the time, Hochul had been in local politics for about a decade and was serving as Erie County’s deputy clerk. During those early years at the nonprofit, Hochul would babysit for the women who lived there, which allowed them to attend counseling programs, according to the New York Times.

The creation of Kathleen Mary House is a story that Hochul, now 62, has leaned on regularly while campaigning around New York state — as county clerk, a single-term congresswoman, and now as lieutenant governor. Although she’s a well-liked, familiar face in state politics, she’s used to flying under the national radar of her more boisterous running mate, Gov. Andrew Cuomo. On Aug. 10, Cuomo announced he would resign from office, paving the way for Hochul to take his place, becoming the first woman governor in New York history.

The announcement comes a week after state Attorney General Letitia James released the findings of an independent review into allegations of misconduct by Cuomo. The review found he had sexually harassed 11 current and former state employees, a violation of state and federal law, and created a “hostile work environment.” (He denies touching anyone inappropriately, saying in an Aug. 3 pre-recorded video that, “I never touched anyone inappropriately or made inappropriate sexual advances. In the announcement of his resignation, he reiterated that message, saying “In my mind, I have never crossed the line with anyone. But I didn’t realized the extent to which the line has been redrawn.”)

Hochul, for her part, stayed quiet about the ongoing allegations until Aug. 3. She released a statement on Twitter, saying, “Sexual harassment is unacceptable in any workplace, and certainly not in public service. The AG’s investigation has documented repulsive & unlawful behavior by the Governor towards multiple women. I believe these brave women & admire their courage coming forward [sic].” Here’s a quick primer on the longtime New York politician.

Hochul (née Courtney) was born to a working-class, Irish Catholic family in Buffalo. According to one of her campaign websites, her grandparents immigrated to the states to flee poverty in Ireland and were eventually lured to the Buffalo area by “good-paying jobs at Bethlehem Steel.” During her childhood, her father worked nights at Bethlehem Steel, and her mother raised their six children. (Hochul is the second-oldest.)

She entered politics early, first as a teenage volunteer with the local Democratic Party during her summer vacations. Academically, she earned a B.A. from Syracuse University in political science, followed shortly after with a J.D. from The Catholic University of America in Washington, D.C.

After law school, she stayed on Capitol Hill, working as an aide to Democratic legislators from New York, Rep. John LaFalce (NY-29) and, later, Sen. Daniel Patrick Moynihan. On her plane trips home to Buffalo, she’d sometimes see the U.S. Rep. Shirley Chisolm, the first Black woman elected to the House and the first to run for president, who lived in the Buffalo area. “She was very profound,” Hochul told DVEIGHT Magazine last year.

Hochul returned to the Buffalo area to raise her two children with husband, William J. Hochul Jr. She first ran for political office at age 35, winning a seat on the local town board in 1994, a position she held for 14 years. In the mid-aughts, she was appointed to be the Erie County clerk.

In 2011, she won a special election for a vacant U.S. House seat (NY-26), having run on a moderate platform that wooed the district’s conservative constituents — and was even endorsed by the National Rifle Association. In winning, she became the first Democrat to represent the district in four decades. But shortly after, redistricting made District 26 the most Republican in the entire state, and Hochul lost her 2012 reelection bid.

In 2014, Cuomo asked Hochul to be his running mate for reelection, replacing his previous lieutenant, Robert Duffy, who was retiring. Although she’s not considered to be particularly close to Cuomo, she’s served in the role since 2015 and famously visits all 62 counties every year on his behalf. Since accepting the position, her politics have shifted more progressive to align with Cuomo’s and to better represent the state’s constituents.

“I would call Kathy a Joe Biden Democrat,” Len Lenihan, the former chairman of the Erie County Democratic Committee, told the New York Times. “She’s very good with the base of the party but has [the] ability to appeal to people beyond the solid base.”

According to New York magazine, Hochul is well-liked among politicians and viewed as a workhorse. Ahead of the 2020 general election, she campaigned around New York state for Democratic candidates. Democratic National Committee chair Tom Perez described her as a “force of nature” to Politico last year, adding that “she has been essential to building a deep bench of strong Democratic leaders in New York State and across the country.”

“In any state, you want for your lieutenant governor somebody who can do the job of governor,” Albany Mayor Kathy Sheehan told the Wall Street Journal in March. “It doesn’t always happen, but in Kathy Hochul’s case, she has the ability to do the job if it comes to it.”

More like this
Here’s Where The NHS Nurses’ Strike Currently Stands
By Sophie McEvoy
Savannah Guthrie Got Her First-Ever Tattoo With This Former Wild Child
By Suzanne Zuckerman
Jessica Simpson On The Time She Was Pursued By A Backstreet Boy & An *NSYNC Member
By The Editors
At 28, Rosie Perez Risked Her Career To Stop Playing Stereotypes
By Gabrielle Bondi
Get Even More From Bustle — Sign Up For The Newsletter
From hair trends to relationship advice, our daily newsletter has everything you need to sound like a person who’s on TikTok, even if you aren’t.