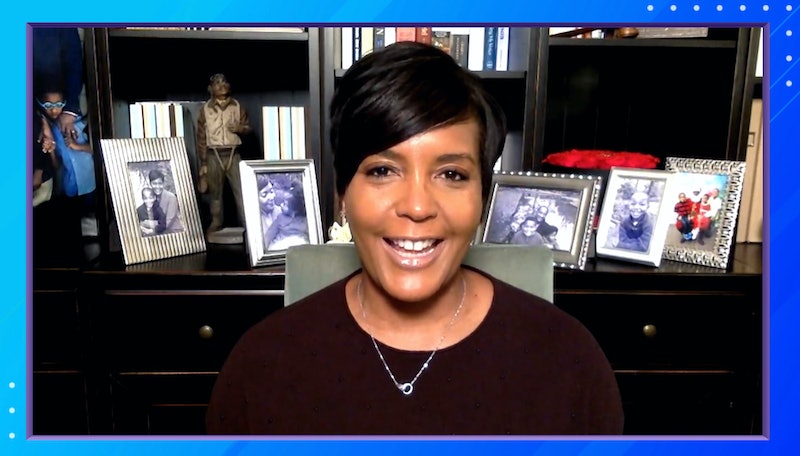 In early July, COVID-19 “literally hit home” for Atlanta Mayor Keisha Lance Bottoms. She tested positive for the coronavirus, as did her husband and eldest son. Now roughly six weeks later, her husband still has lingering symptoms. He wakes up with a migraine, muscle soreness, and chronic fatigue, Bottoms tells Bustle. He has weird, vivid dreams. (It’s one of the virus’ stranger, anecdotal symptoms.) “My grandmother used to always say you don't worry until you have to,” says Bottoms, who was essentially asymptomatic.

For most of 2020, she’s been approaching crises with this type of coolheaded leadership. In April, Georgia was the first state to reopen businesses, resulting in a rapid uptick in cases. Bottoms, who took office in 2018, got to work: consulting with experts and implementing a citywide mask mandate. Her autonomy led to a terse back-and-forth with Gov. Brian Kemp (R), who filed a July lawsuit against her measures. (He’s since retracted it.) That’s not to mention her late-May response to protesters in the wake of George Floyd’s death. Her speech went viral.

Which is all to say that in keeping worry at bay, Mayor Bottoms has invited the spotlight in. For the past few months, she’s been on former Vice President Joe Biden’s short list as a potential running mate. On Thursday, she’ll be speaking on the closing night of the Democratic National Convention, alongside the likes of Pete Buttigieg and Sen. Cory Booker. She talks to Bustle about school openings, COVID-19 recovery, and Sen. Kamala Harris.

First off, how are you and your family doing?

My son and I are doing great. My husband, all things considered, is doing really well, but he has a lot of lingering side effects. But compared to many of the horror stories we've seen and heard, he's doing fine.

We know so little about this disease. How are you managing possible long-term effects?

It's certainly something I'm concerned about, and I'll continue to read articles and follow the science. For as maddening [as it’s been] and as much anxiety as we've had, for me to worry about the future would be even more maddening and unproductive.

Have there been any silver linings to lockdown?

Seeing my kids every day. [Before COVID-19,] some days I would leave before they were up, and they might be in bed when I got back home. So just being physically in the house with my kids has been really good for us.

Many Georgian schools have reopened, followed by large outbreaks. You’ve made the decision for your kids to learn virtually for the fall. Was that a difficult choice?

With their school, a majority of the kids have gone back into the classroom. But thankfully, their school is on a two-week cycle. You have a two-week [trial period] to decide what you want to do. With COVID numbers in our state, I didn’t want to send them back just yet. We'll reevaluate in a couple weeks. It gives me an opportunity to assess the precautions and safeguards that the school is taking.

How did you decide when to end Atlanta’s lockdown?

It was all driven by data and metrics. We convened an advisory council of about 60 people, of corporate business leaders, small-business owners, representatives from colleges and universities, our public school system, and independent schools. It was a cross section of folks. They were charged with coming up with whether or not we could continue reopening. We’d made it to Phase 2, and I was stunned that we had to go back to Phase 1 so quickly. But based on the data, we had to go back, based on the availability of ICU beds, contact tracing. It wasn't difficult based on science, but it was difficult mentally to wrap my mind around the fact that we were backsliding.

How has the politicization of the pandemic affected you?

This is not a battle I would have chosen. People are losing their lives. As a leader, I can't conceptualize that there are people who seek elected office who don't have the capability to empathize, who are willing to sacrifice lives for the sake of the economy. It makes me angry. It's frustrating. It's sad. When this is all said and done, I'll be able to say I did everything I could to make sure people lived. I don't think everybody who holds office will be able to say that.

The role of empathy has been a recurring theme in the convention. Can you share anything about your speech on Thursday?

It will be keeping with Atlanta's history and legacy of civil rights. I will be doing it in Atlanta, at a location that won’t be home. It's definitely different. It struck me last night. [The convention] has a much more somber tone, but this is 2020. It's been a pretty somber year. So everything is different this year, not just the format, but the content and focus.

2020 will be a historic year, for both good and bad reasons. What do you think you’ll remember most?

And lastly, how did you find out that Kamala Harris had been chosen as Biden’s running mate?

I suspected it was going to be Kamala. I knew, based on the conversation I had with the vice president. I talked with him at about 12:45 p.m. that day. He called to tell me that it wasn't me. I obviously was disappointed, but I was very excited for her, and for what this moment represents. A woman is on the ticket, and on top of that, a woman of color. I mean, it's a historic moment for our country.