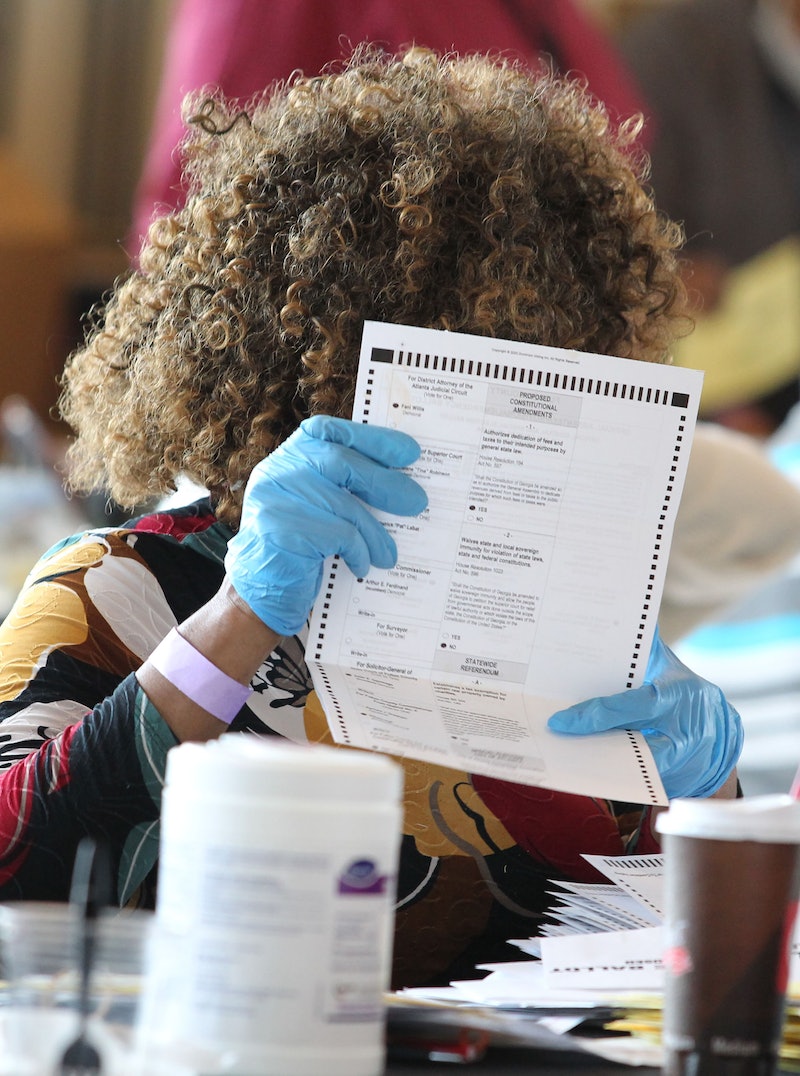 Across the country, all eyes are on Georgia, poised to turn blue for the first time in two decades. Part of the hold-up, though, is approximately 3,000 mail-in ballots that were invalidated due to completion errors — which voters have until 5 p.m. on Friday, Nov. 6, to fix. Enter ballot-curing volunteers like 37-year-old Lisa Hernandez, who go door-to-door helping people fix technical issues on their absentee ballots. Here, she tells Bustle what it means to cure a ballot and why it’s crucial to fighting voter suppression.

Seeing Georgia be a viable player to change the path of this election — and knowing that, for once in my life, my actual single vote mattered — motivated me to make sure every single blue vote counted. As soon as I heard about ballot curing through a Facebook group I belong to, I knew I had to help. So Wednesday night, after staying up for almost 24 hours watching returns, I signed up through a volunteering effort organized by the Georgia Democratic Party.

Ballot curing just means fixing simple mistakes that otherwise would invalidate someone’s vote. The voter either needs to call the Voter Protection Hotline or email a signed affidavit, and volunteers help them through the process. To start, I had to watch an hour-long training video and fill out COVID screening questions. I downloaded an app that had details on the people I was assigned, like how many ballots needed to be cured, the person’s name and age, their previous voting issues, and how many points of contact they’d previously had. I was assigned people who had been contacted multiple times but hadn’t been reachable by phone or mail.

It's already not easy to be blue in Georgia, and I don’t want people to lose their vote over technical mistakes.

Of the five households I was assigned, everyone had already had a volunteer show up before I got there — I could see their status change in the app before I even pulled up. The one person I was able to speak to had just had another volunteer leave her house. Her issue was that her two kids were at school out of state, and they never received their absentee ballots. I didn’t know what to tell her other than to call the Voter Protection Hotline. At the addresses where no one was home, I left a handwritten note explaining their mail-in ballots had been rejected. I left the number for the Voter Protection Hotline, an affidavit they could fill out and submit via email, and instructions to do so by 5 p.m. Friday.

Even if Georgia gets called before I can hit the road, I intend to still go cure ballots. Votes will be counted until 5 p.m., and I know I can give my time to ensure that every vote gets counted. It’s already not easy to be blue in Georgia, and I don’t want people to lose their vote over technical mistakes.

I will for sure volunteer in upcoming elections. If you’re an educated person filling out your ballot at home, knowing all about the voter disenfranchisement in the state, you’ll be more careful — but even then, you still might make a mistake. But what if you’re 85, scared of COVID, never voted by mail before, and you can’t figure out your ballot? It’s like asking for those votes to be thrown out.

I would hope that there are wholesale changes to mail-in voting in Georgia after this, but I don’t know if that’s realistic to hope for. So that’s exactly why I’ll be doing this work again.

More like this
Delia Cai’s Small-Town Romance Goes Beyond The Tropes
By Samantha Leach
Pamela Anderson Is Still A Hopeless Romantic
By Ilana Kaplan
Savannah Guthrie Got Her First-Ever Tattoo With This Former Wild Child
By Suzanne Zuckerman
Jessica Simpson On The Time She Was Pursued By A Backstreet Boy & An *NSYNC Member
By The Editors
Get Even More From Bustle — Sign Up For The Newsletter
From hair trends to relationship advice, our daily newsletter has everything you need to sound like a person who’s on TikTok, even if you aren’t.