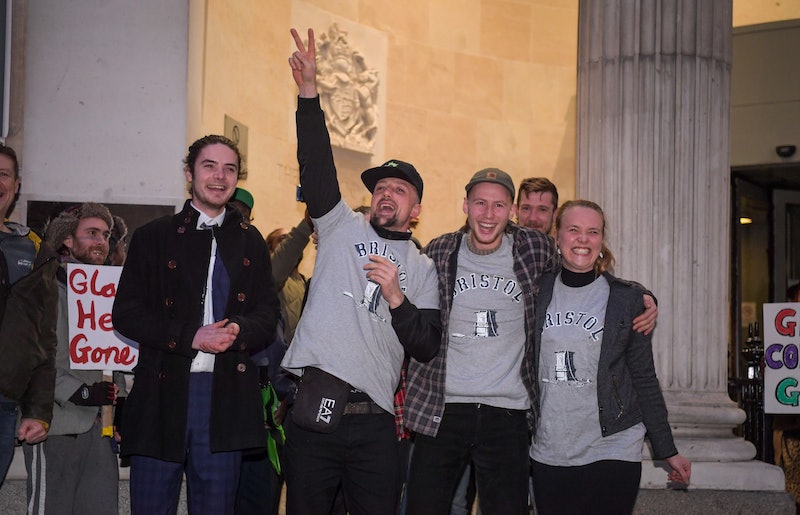 The so-called Colston Four, who were charged last year with toppling the statue of slave trader Edward Colston into the Bristolside harbour, have been cleared of criminal damage. Sage Willoughby, 22, Rhian Graham, 30, Milo Ponsford, 26, and Jake Skuse, 33, along with “others unknown”, were accused of removing the statue from its plinth during a Black Lives Matter protest in June 2020 “without lawful excuse” but were acquitted by a jury at Bristol Crown Court, yesterday (Jan 5.).

Speaking outside court after being acquitted, Graham thanked supporters, including Bristol-born graffiti artist Banksy, who had created T-shirts of the empty plinth for the defendants after supporting a well-publicised outpour of support for the Four in Bristol. Willoughby denied they were trying to edit history, but said others were “whitewashing history” by calling Colston a “virtuous man”.

“Justice was served yesterday,” Jen Reid, the BLM protester whose viral image from the Bristol march in June 2020 was inspiration for artist Marc Quinn’s black resin statue, A Surge of Power, which replaced Colston on the plinth, told Sky News.

While the Colston Four were greeted by supporters outside the court and online who were delighted with the acquittal, not everyone has been impressed with the outcome, with some taking to social media to express their disappointment in the verdict and trial, with some suggesting it “set a bad precedent” to allow the “woke left” to destroy property and statues based on political beliefs.

Damages to the Colston statue, which has since been replaced by a statue of Jen Reid, a BLM protester, while the graffitied statue went on display at M Shed in Bristol, were estimated at less that £4,000, per The Telegraph. Whereas the decision to opt for a jury trial, which some commentators believe was a witch hunt on the behalf of Home Secretary Priti Patel, is thought to have cost the taxpayer more than £50,000.

“I think it was a waste of the tax-payers money,” added Reid. “10,000 people marched that day, and as you can see from video footage there were many people taking part in toppling Colston that day. To point out four people to stand trial for thousands of people, should never have happened.”

Transport Secretary Grant Shapps said we can’t live in a world where “destroying public property can ever be acceptable,” as he promised the law would be changed to close a “potential loophole” limiting the prosecution of people who damage memorials as part of the police, crime, sentencing and courts (PCSC) bill. Under current legislation, where the damage is less than £5,000, the maximum sentence is three months’ imprisonment and a fine of up to £2,500, per The Guardian.

On the other side of the party line however, Labour MP Clive Lewis said: “A British jury has confirmed the toppling of Edwards Colston’s statue was not a criminal act. The real crime was the fact the statue was still there when protesters pulled it down.

“Today’s verdict makes a compelling case that a majority of the British public want to deal with our colonial and slave trading past, not run away from it. That’s important to understand and I hope it gives political leaders a little more confidence when it comes to challenging the ‘culture war’ our government is currently pursuing,” Lewis added.

Elsewhere, political commentator Calvin Robinson wrote on Twitter, “mob rule wins the day in Bristol”, accusing the Colston Four’s “thuggish behaviour” of being “excused” because of their politics. Adding that, “the jury wanted to be seen as ‘on the right side of history’”.

However, a “jury returning a verdict that they are entitled to return is an example of the law in action, and not of a legal process undermined,” writes independent commentator on law and policy, David Allen Green. Avon and Somerset Police and Crime Commissioner Mark Shelford said he recognised “many people will feel unhappy with the outcome,” but added “due process has now taken place”.

“This court case has recognised that there was another injury being caused to real people, rather than to a hunk of bronze and marble,” Professor David Olusoga, who was a witness for the defence of the Colston Four, told James O'Brien on LBC.

The Colston Four openly admitted their involvement in removing the 125-year-old statue, but insisted that they had committed no crime, arguing that their actions were a proportionate response because the statue was a hate crime to the people of Bristol because of Colston’s links to the slave trade.

“At the heart of the court case was a question of whether history matters,” Professor Olusoga added. “The defence wanted this to be a trial in which history was at the centre because you can't make sense of what happened in the summer of 2020 unless we appreciate that this was a targeted political act against a man who was validated, whose career was celebrated in Bristol in the full knowledge that he was a mass murderer.”

LBC’s James O'Brien explained: “There are two ways people can choose to respond to the Colston Four verdict: 'Get angry, get cross, and get frightened' or 'pause, learn, comprehend, and respond’”

“The Coulston Four’s actions prompted real, meaningful debate,” Sathnam Sanghera, author of Empireland, wrote on Twitter in response to the news. “The statue, as a deposed exhibit, is infinitely more interesting than it was as street furniture. Statues in themselves are not history: they are one person's view of history, at one point in history.”

More like this
Watch Jacinda Arden’s Devastatingly Honest Resignation Speech
By Sam Ramsden
Gen Z Are Twice As Likely To Identify As Queer, According To New Data
By Sam Ramsden
What The UK Blocking Scotland’s Gender Recognition Bill Means
By Sam Ramsden
This Is When Netflix Is Going To Start Charging You For Sharing Passwords
By Darshita Goyal
Get The Very Best Of Bustle/UK
Sign up for Bustle UK's twice-weekly newsletter, featuring the latest must-watch TV, moving personal stories, and expert advice on the hottest viral buys.