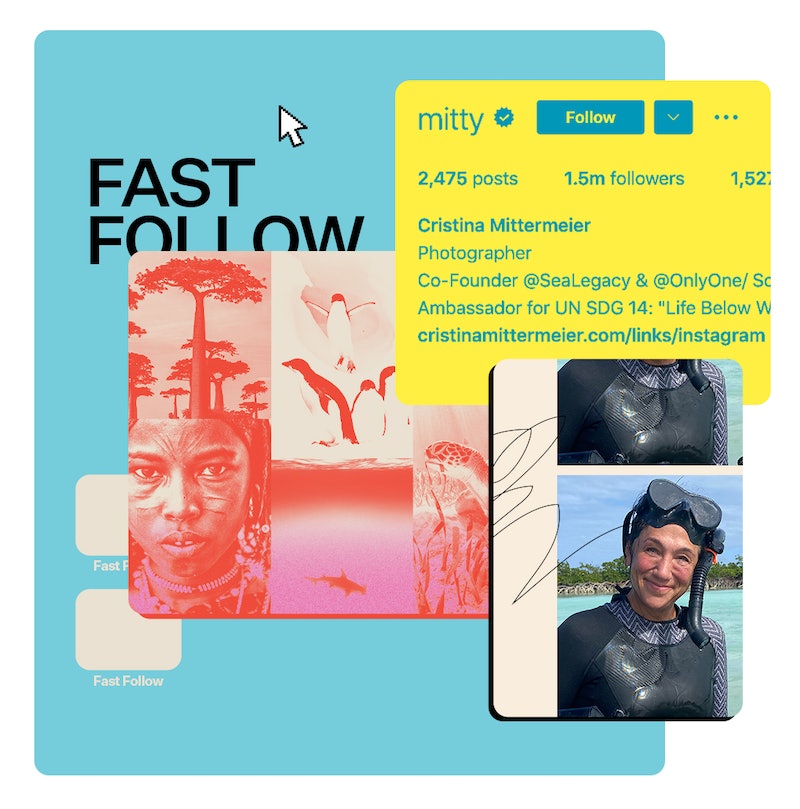 For more than 25 years, Cristina “Mitty” Mittermeier has traveled the globe with her camera, capturing images like freshwater crabs in Madagascar and hammerhead sharks in the Bahamas — all while launching the International League of Conservation Photographers (ILCP) and the ocean nonprofit SeaLegacy. With her 1.5 million followers on Instagram, the Mexico City native imagines herself as an advertising executive for the ocean. “What I’m trying to sell is the opportunity to protect our planet,” says the photographer. But not everyone is impressed — namely, her 25-year-old daughter, who finds her mom’s digital footprint a little too “inspiring” (her words).

“I’m trying to be a little more human and share that, like everybody else, I too am scared [of climate change],” says Mittermeier, who’s also trained as a marine biologist. “I too feel the burden of the task ahead of us, and I am mad at corporations and governments that are not doing enough. But I believe that if we come together, we can demand the kind of world we want to live in. So I am asking, please do not abandon the effort. We need all of you.”

Her latest efforts premiered earlier this month, in a six-part National Geographic series, Welcome to Earth, directed by Darren Aronofsky, that follows Will Smith on a global tour of the natural world with environmental leaders. Mittermeier cameos, introducing the Oscar nominee to tiger sharks and their powerful sense of smell. “Will is one of the most influential people in our culture today, not just because he’s an actor and musician and philanthropist, but because he’s a real human,” she says. “And he’s terrified of sharks!”

She sees storytelling as a way to combat both fear and existential apathy. “Climate change is such a big story that you really have to break it down into smaller stories and smaller actions,” says Mittermeier, whose Instagram posts are accompanied by deep captions and “link in bio” directives. “What I want is for anybody who cares to be able to pick up their phone and go, ‘Oh, I can take action today. It’s easy. I just helped restore a coral reef.’”

Below, she talks about celebrity fans, NFTs, and her favorite comedy account.

@glennondoyle. I love the way she thinks. And I also follow the NFT space, @open__earth for example. They just did the first drop for NFTs that are going to be sold to benefit ocean conservation. I think crypto [and] NFTs are going to allow us to place value on the things that are really important to humanity and use our digital presence to create wealth for things that matter.

What is the best or the funniest thing that you’ve seen online this week?

Because I live on a boat, my favorite is an account called @thequalifiedcaptain. It’s just these people that don’t know how to drive boats, and the things that they do are devastating but also funny.

What’s been the strangest comment or DM you’ve received?

Somebody just asked me if I wanted to be a brand ambassador for a waxing salon. [Laughs.] And they said I would get a discount if I post on my feed.

What’s the best thing that's happened to you on social media so far?

Build[ing] a real-world community in the digital world. The people who follow me on Instagram — that follow @sealegacy, our organization, or that are part of @onlyone — are real people. Whenever we’ve had a live event, they come in the thousands. These are young people looking for hope and guidance, [who] want to know we’re not going to live in a horrendous post-apocalyptic dystopia. And I believe that’s possible.

Who is your favorite person following you online right now?

I still have to pinch myself that people like @naomiwatts or @hilaryswank or @jennifer.garner or @jessicabiel follow me. They have a lot of the same values I have. They have children. They’re concerned about the future of the planet.

More like this
Annie Rauwerda Finds Treasure In The Depths Of Wikipedia
By Chloe Foussianes
How To Curl Your Hair With Leggings, According To TikTok
By Carolyn Steber
Ashamed Of Your Screen Time Stats? Here's How To Change That
By Alexis Morillo
Learning To Love, Not Judge, The Lunchbox Wives Of TikTok
By Esther Zuckerman
Get Even More From Bustle — Sign Up For The Newsletter
From hair trends to relationship advice, our daily newsletter has everything you need to sound like a person who’s on TikTok, even if you aren’t.