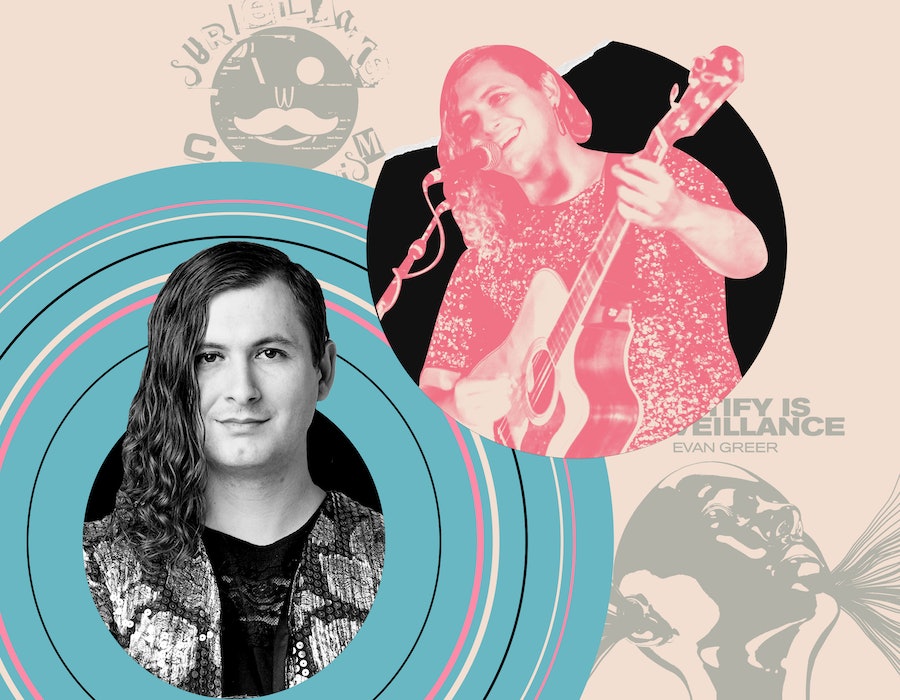 In January 2021, Spotify was granted a new U.S. patent. Most of the streaming platform’s hundreds of annual patent applications pass by without comment, but this one was different. The “Identification of Taste Attributes From an Audio Signal” promised to monitor “intonation, stress, [and] rhythm” of speech, as well as a person’s surroundings (on the bus, at school, in the library) to build metadata points — gender, age, accent, emotional state — to make music recommendations. For musician Evan Greer, this is completely unacceptable.

“Surveillance capitalism, which is based on harvesting data and using it to extract profit based on human attention, is manipulating people using their own data,” she tells me from her home in Greater Boston. As well as making music, Greer, 35, is a digital justice activist at Fight for the Future, a nonprofit advocacy group where she is leading a campaign to push Spotify to stop developing the technology, which has yet to be operationalized. Her new album, Spotify Is Surveillance, takes aim at the worst of our lives online, from political punk tracks about data harvesting to songs about quarantine. (It’s inspired by the work of Justice At Spotify.) That said, it’s not all doom and gloom. “It’s not like every song is some raging anthem about surveillance capitalism,” Greer says with a laugh. “There are love songs, there are songs about missing shows, [and they] fit together in a certain way.”

Greer, whose writing has appeared in The Washington Post, The Guardian, and Wired, is keen to point out that she doesn’t actually hate the internet. “As an independent artist who’s way outside the mainstream, the internet’s the single best thing that’s ever happened,” she says, citing the time she performed at a record store in Prague with her 7-week-old baby, Saoirse, in 2010, and found herself singing in front of “a hundred punk kids screaming all the words to [her] songs.” She remembers thinking, Whoa, this is a really powerful technology.

Bustle spoke with the artist about Big Tech, trans history, and her surprise ad hoc drummer.

How do you go about capturing complex topics through music?

I had the skeleton of a song with no words, and I thought, I’m spending all my waking hours working on this issue, so let me try to create a piece of art about it. [The audio] was a cool product of home recording. I included audio clips [from] people who are brilliant on this issue, [like] Jacinta Gonzalez from Mijente, Ursula K. Le Guin, Malkia Cyril, and Chelsea Manning.

How was the process of home recording different from being in a studio?

Well, Darcy, the GarageBand AI drummer, is my new best friend. We hang out, we jam. Also, being in my bedroom allowed me to experiment with my voice in a way that felt affirming and empowering. Trans folks’ voices are highly politicized. I found a way of singing that felt more authentic for me and more in line with the rest of my gender presentation.

You’ve described the “Tyranny of Either/Or” music video as a mini-documentary about trans and queer liberation. How did you decide that format?

I’m an amateur history buff, and the history of revolutionary trans folks being on the front line couldn’t be more relevant today. I’m a 35-year-old trans person, and I wrote a [Washington Post] piece about the mainstream gay rights movement and some of the ways it’s failed to fight for trans people. But so much of the history of radical organizations was hidden from me. They were primarily led by Black and brown trans women. We have footsteps to follow in.

It was just Trans Day of Visibility. What does visibility mean to you, in your music and activism?

Trans Day of Visibility can be a complicated day for a lot of people. Visibility doesn’t necessarily translate into justice or liberation. Because of the work I do, I’m always a bit visible. There have been moments when I’ve felt nervous for my safety. But music can disarm people or open them up to thinking about your experiences. That can get exhausting, but I hope it helps other folks who don’t feel as seen or who don’t have the same networks of support. So if a song of mine or something I write helps just a couple of kids, it’s all worth it.

More like this
Watch Jacinda Arden’s Devastatingly Honest Resignation Speech
By Sam Ramsden
"Lavender Haze" Star Laith Ashley Breaks Down Filming With Taylor Swift
By Jake Viswanath
Jessica Simpson On The Time She Was Pursued By A Backstreet Boy & An *NSYNC Member
By The Editors
At 28, Rosie Perez Risked Her Career To Stop Playing Stereotypes
By Gabrielle Bondi
Get Even More From Bustle — Sign Up For The Newsletter
From hair trends to relationship advice, our daily newsletter has everything you need to sound like a person who’s on TikTok, even if you aren’t.