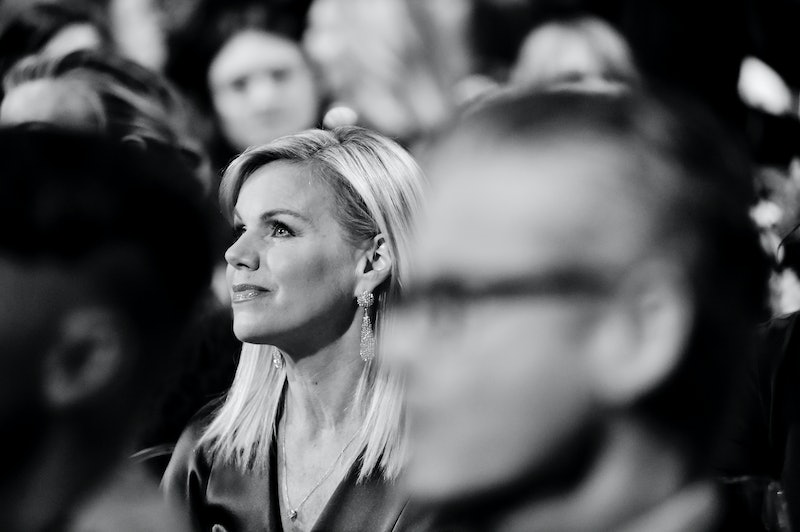 This Sunday, Gretchen Carlson will be watching the Academy Awards from the East Coast — she's on parent duty — while in Los Angeles, Nicole Kidman and the cast of Bombshell will clink proverbial glasses for their retelling of her story. The film, a three-time Oscar nominee, follows Carlson and her fellow Fox News employees during the reign of the late Fox News chairman and CEO Roger Ailes.

In July 2016, Carlson sued Ailes for sexual harassment. Fifteen days later, the chairman resigned, and as part of Carlson's $20 million settlement package with 21st Century Fox, she signed a nondisclosure agreement that prohibits her from speaking about her experiences at the network. Thus, she couldn't contribute to Bombshell or last summer’s Showtime miniseries The Loudest Voice. Are the accounts true? Have they totally missed the mark? She can’t say.

What she can do is advocate for other women: Since 2016, she’s been amplifying other women’s stories via a documentary series, writing her second bestselling book, and working with legislators to ban forced arbitration, a practice that settles company disputes privately, outside of the judicial system. "They're bad for a ton of reasons," Carlson says. "And I didn't even know about this until my case.'" In the last two months, she’s launched a nonprofit, Lift Our Voices, and announced a new interview series with Blumhouse TV. “My husband says to me all the time, ‘How are you more busy now than when you were doing a live TV show?'” she jokes.

Carlson recently sat down with Bustle to talk about her latest projects.

Tell us some things we don’t know about you.

I can't whistle. I can't parallel park — I've only done it once in my life when I was 16. I just got a car that, if I could figure out how to set it up, would actually park for me. I’ve had braces twice.

Your story has obviously re-entered the national conversation in the past year with The Loudest Voice and Bombshell. How did it feel to watch those projects?

I spoke to people who used to work at Fox, and some told me they only made it through one episode of the miniseries because of PTSD. [My family] did go to the movie together. My husband actually wanted my kids to see a portrayal of what had happened.

Tell me about your work on Capitol Hill.

If we can pass this legislation, which is federal, companies could no longer force women into arbitration for sexual [discrimination suits.] My bill is very narrow in scope. It's only three pages long. I have Republicans and Democrats as cosponsors, and I actually have Lindsey Graham and Kirsten Gillibrand['s support.]

It tends to be more of a Democratic issue, so I especially had to meet with Republicans to explain how this is apolitical. And then I had all the lobbying groups working against me.

And where do NDAs fit into this?

Eradicating NDAs is the next phase. Had I known that they were going to make a movie and miniseries about my story — and that I wasn't going to be able to participate in them — I would never have said it was OK to silence me. NDAs were created to protect company secrets, like the Big Mac recipe or nuclear codes. It wasn't to protect predators from harassing women on the job.

Are there ways that young women in the workplace can be more assertive that you've gleaned from your time doing this?

One of my favorite quotes is that, “One woman can make a difference, but together we rock the world.” And we're seeing that play out, like with the Google walkout. [Shortly after,] Google took arbitration clauses out of their employment contracts.

Regarding another event in the news: the recent passing of Kobe Bryant. How do you think about reconciling people's accomplishments with mistakes from their pasts?

The next day — after the initial shock, and comforting my son, who was broken up — I spent a lot of time thinking about his case and just wondering what [his accuser] was thinking. It's part of his life story, and I don't know how that would've been different in 2003, but it's definitely part of the story. I'm sure she signed an NDA.

One of the unresolved questions in the #MeToo movement is what society should do with people accused of harassment and sexual assault. How do you feel about that?

In our society, it’s so deeply embedded to think about redemption. Three weeks after somebody famous goes down for sexual harassment or assault, I'll look on the TV and see the ticker say, "When's Matt Lauer making his comeback?" I'm like, "What the hell?" There are, maybe, millions of women who haven't made their comebacks yet. We need to completely change the way we're covering this.

I know that you’ve reached out to Fox News to be released from your NDA, in the news of NBC supposedly releasing their employees from them. Have you heard back from Fox?

Do you expect to?

No. But we're going to keep fighting.

More like this
24 History-Making Black Women You Probably Didn't Learn About In School
By Ayana Lage and JR Thorpe
25 Inspiring Quotes From Black Women To Celebrate Black History Month
By Kyli Rodriguez-Cayro and JR Thorpe
Savannah Guthrie Got Her First-Ever Tattoo With This Former Wild Child
By Suzanne Zuckerman
Jessica Simpson On The Time She Was Pursued By A Backstreet Boy & An *NSYNC Member
By The Editors
Get Even More From Bustle — Sign Up For The Newsletter
From hair trends to relationship advice, our daily newsletter has everything you need to sound like a person who’s on TikTok, even if you aren’t.