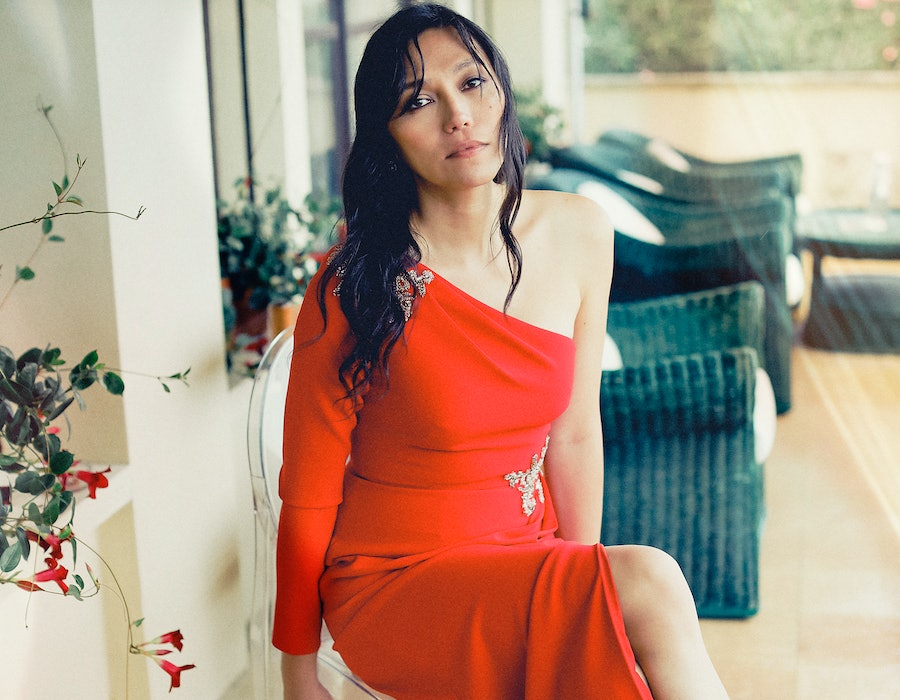 When Isabel Sandoval was midway through writing her third feature film, Lingua Franca, Donald Trump was elected president. She’d originally imagined the New York story as a romantic drama between Olivia, an undocumented Filipina live-in caregiver, and her elderly client’s grandson. The central tension would hinge on him learning Olivia (played by Sandoval) was a trans woman. But then Trump assumed the Oval Office, and Lingua Franca took on darker, more political tones.

“I've always sought out stories of otherwise invisible and voiceless people in our history,” Sandoval, speaking from an artist residency in New York, tells Bustle. “It hasn’t been by design, [but there has been] a theme of pushing against hardship and difficulty, and making it through.”

Shot over 16 days in Brooklyn, Lingua Franca was Sandoval's first predominantly English-language film, which she wrote, produced, edited, directed, and starred in. After its 2019 premiere at the Venice Film Festival — where Sandoval became the first trans woman to direct a contender — the movie was acquired by Ava DuVernay’s distribution company, Array. (It’s currently available on Netflix.)

This week, Sandoval, who's in her thirties, is sharing her next project: Shangri-La, a short film produced by Miu Miu, known of late for the collared, houndstooth coat that Ella Emhoff wore on Inauguration Day. It’s the latest entry in the fashion brand’s “Women’s Tales” series, which boasts directorial alumni such as Ava DuVernay, Hiam Abbass, and Miranda July. (Sandoval, in a bit of Tinseltown serendipity, is now repped by the same CAA agent as DuVernay.)

At roughly 10 minutes long, Shangri-La captures a dreamlike soliloquy by a Filipina farmworker in Depression-era California. In trademark Sandoval fashion, the script prioritizes the woman’s interiority through a poetic blend of eroticism and shapeshifting.

The filmmaker talks to Bustle about her creative approach.

You had just about three months to create Shangri-La. How did the story come about?

It’s a combination of inspirations. A novel I’ve been thinking a lot about is America Is in the Heart by the Filipino American writer Carlos Bulosan. It’s set in the ’30s and ’40s, and it’s about his own migration from the Philippines as a youngster. It’s kind of like the Filipino Grapes of Wrath. And since I was also working on [my next feature,] Tropical Gothic, I thought of combining elements, stylistically and narratively, from both.

I see the migration themes. Where does Tropical Gothic fit into it?

I wanted to see whether I could use elements of atmospheric horror to convey eroticism or romance, [like with] the opening images of our bodies merging into each other.

And was the short timeframe a help or hindrance?

It helped me. I love deadlines. If I'm going to be under a certain pressure, either budgetary or [with time], it makes me step up on the creative end. I can be decisive pretty immediately.

You’ve talked about how your stories center a trans female gaze. What techniques do you use to strip away a white male gaze, which many of us have been indoctrinated to see as the default?

I think it's ultimately in terms of visual language, [like] the privileging of the face and facial expressions. Desire is ultimately not just about bodies, and there's nothing more sensual and erotic than the face of a woman allowing herself to experience and enjoy sexual pleasure. That's one. And for the longest time, I've been quite resistant to voice-overs as a lazy technique, but with Lingua Franca, for instance, we listen to [Olivia’s] voice at the opening and ending, over shots of a quintessentially American landscape. That's important to situate the audience, so they have a vivid idea of whose perspective they're paying attention to. That's also what I wanted to do with Shangri-La. I mean, this woman has 85 if not 90% of the dialogue. It feels very Woolfian. Mrs. Dalloway is essentially stream of consciousness.

By having a script that’s stream of consciousness, the “world” you’re following is one character’s interior thoughts. When you’re writing these scenes, how do you negotiate that with the outward realities of their lives?

The most incredible filmmakers are ones who are able to design and conjure their own worlds, someone like Wes Anderson or Céline Sciamma or Agnès Varda. Their characters are contained in their own strange, unique, singular roles, which might not be tethered to our reality. That's what I wanted to do with Shangri-La. Here, although it's effectively set during the Great Depression, I don't show the real world. It's cloaked in this dreamy, otherworldly veneer. I think I've come to a point in my filmmaking where I don't necessarily need to anchor it in some kind of reality.

And you mentioned Shangri-La is dedicated to your mother. Can you tell me about that choice?

In my films, the women characters tend to be resilient survivors. I see a lot of that in my mother, the way that she raised me as a single parent, even though I was gay and in the Philippines. It's just very neurotically Catholic [there], but she gave me the freedom to be whatever person I wanted to be.

In an interview with PBS, you said viewers have told you that your films are the first times they’ve seen themselves represented on screen. Do you have a specific memory of when you felt that way?

Klute, starring Jane Fonda. She's not trans, she's not Filipino. [Her character] is doing sex work to start a new life. I was blown away by her performance, of being such a modern, complicated, and intelligent woman. It's something that I hadn’t seen a lot in Philippine cinema. It made me want to act, one, and got me started to think [about] whether I was trans. I credit Jane Fonda and her performance as having gotten me started [in film] and also in a way of directly and indirectly seeing myself.

Earlier today in the presentation with Miu Miu, Ava DuVernay talked about wanting to be referred to as a “Black woman filmmaker” rather than as a “filmmaker.” Do you have a preference?

Personally, I would prefer to be called a filmmaker. The projects I've chosen to make and intend on making reflect my identity and cultural background. So it's more [about] how I'm positioning myself in the industry. God knows, someone like me goes in, as an immigrant filmmaker, a woman filmmaker, a woman of color filmmaker, and a trans filmmaker, and there are so many boxes for Hollywood to put me in. And studios can be really lazy. They want to set limits on me, in terms of the kinds of stories I can make. I do not want that to happen.

More like this
MOBO Awards Found Kanya King On The Woman Whose Grit & Determination Spur Her On
By Kanya King
The Indigo Girls Taught Me Queer Relationships Could Be Messy, Too
By Hannah Soyer
Claire Foy & Rooney Mara Revisit A Devastating Tale In 'Women Talking'
By Bustle UK
How To Stream 'White Noise' On Netflix
By Grace Wehniainen
Get Even More From Bustle — Sign Up For The Newsletter