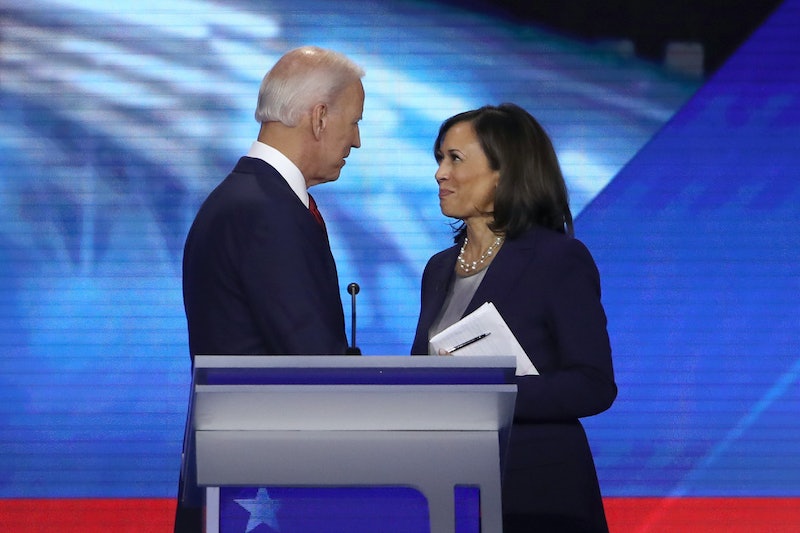 On Aug. 11, Vice President Joe Biden, the presumed Democratic nominee for president, announced Sen. Kamala Harris as his running mate for the 2020 presidential election. He made the announcement via Twitter, following a precedent established by President Trump in 2016. Sen. Harris will be the first Black woman to be nominated for vice president by a major political party, and the first South Asian American woman. Should the Biden-Harris ticket win on Election Day, she'd be the first woman elected into the White House.

The announcement comes shortly before the Democratic National Convention, which begins on Monday, Aug. 17, and will be held online due to coronavirus concerns. Biden is expected to deliver a speech on Thursday, the final night, in which he'll accept the party's nomination. Sen. Harris is now expected to accept her nomination on Wednesday night.

"Back when Kamala was Attorney General, she worked closely with Beau," Biden posted on Twitter, referencing his late son. "I watched as they took on the big banks, lifted up working people, and protected women and kids from abuse. I was proud then, and I'm proud now to have her as my partner in this campaign."

As vice president, Sen. Harris would likely coordinate responses to national emergencies, represent Biden if he were unavailable, and cast any tie-breaking votes in the Senate. Given Biden's age, 77, some assume he would only serve for one four-year term. His choice for VP has drawn both additional scrutiny and excitement, as the person could be seen as an early front-runner for the 2024 presidential race.

"[Biden] can unify the American people because he's spent his life fighting for us," Sen. Harris responded on Twitter. "And as president, he'll build an America that lives up to our ideals. I'm honored to join him as our party's nominee for Vice President, and do what it takes to make him our Commander-in-Chief."