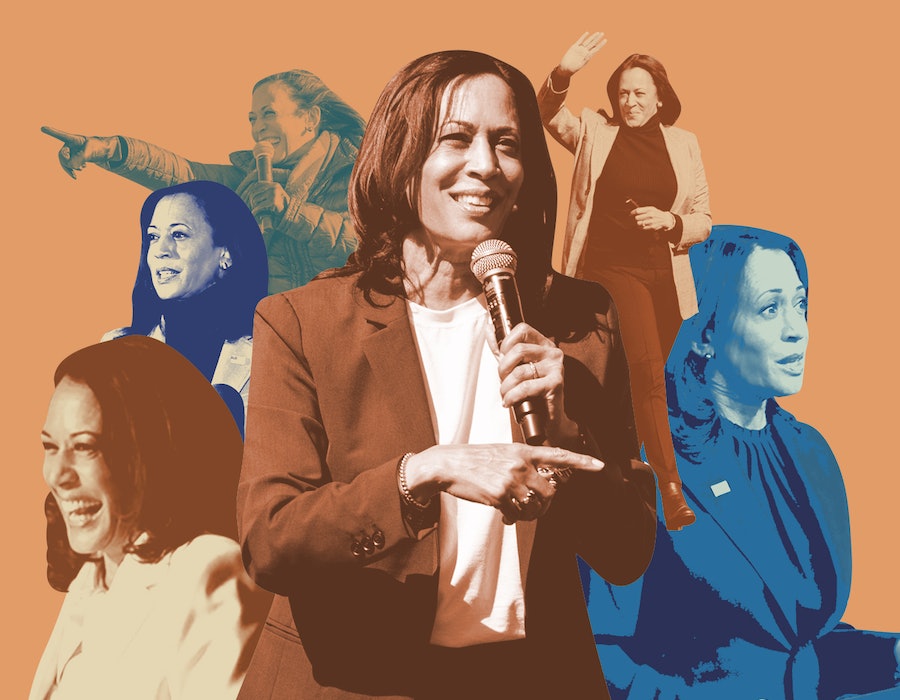 On the November day that Joe Biden and Kamala Harris’ election victory was called, Harini Krishnan’s teenage daughter pulled a classic Gen Z move: She took out her phone, aimed it at Mom, and started recording. Krishnan, a Democratic organizer who helped lead Biden’s Bay Area campaign, felt the win viscerally. In the video, her voice is small, almost tender — a departure from the strong, determined tone she used at campaign events. It’s as if, for the first time in almost two years of battling trolls, hate, and disinformation, she's allowing herself to be vulnerable. “I can’t tell you what this feels like,” says Krishnan in the video, heaving through sobs.

Krishnan, who turns 48 on Inauguration Day, has a miles-long CV. She is a 2020 Democratic National Convention delegate, a California Democratic Party Platform Committee member, and a national grassroots organizing lead for South Asians for Biden. But, she says, the title she's proudest to bear is an unofficial one: She’s a member of the KHive, Vice President Kamala Harris' de facto corps of supporters.

Like many online-borne movements, the #KHive hashtag's origin is disputed. Vox credits a 29-year-old attorney, Eric Chavous, who first tweeted it in 2017, inspired by Beyoncé’s “Beyhive.” Daily Dot cites MSNBC anchor Joy Reid. Many KHive members attribute it to activist Bianca Delarosa, who lists “founder of KHive,” in her Twitter bio. (A few weeks after the Vox article credited Chavous, Delarosa, who's been accused of online harassment, tweeted, “Okay, I, Bianca Delarosa, started KHive. It wasn't some random dude.”)

Thus, in true modern fashion — with an origin story contested on Twitter — a movement was born.

"She's going to be a voice for social justice, so we're in it for the long run."

I’ve spent the past few weeks talking to members of the KHive, like Krishnan. The group lives across social media, and particularly on Twitter. Last fall, HuffPost estimated the group included around 60,000 people. What’s unique about the members I've spoken with is how their initial purpose has evolved. Now, rather than just being Harris' hype machine, they see themselves as her first line of defense against the rumor mill. “I've always said [that] the KHive is a very scrappy bunch,” says Reecie Colbert, who's in her 30s. “It's scrappy because there's such a massive amount of disinformation about Kamala.”

In 2018, Colbert, a D.C. financial analyst, started Instagram and Twitter accounts with the handle @BlackWomenViews to lift up stories about Black women in the news. She focused heavily on politics: Black candidates, Black lawmakers, Black activists. The California senator was an obvious subject.

The following year, during the Democratic primaries, both Krishnan and Colbert noticed how Harris faced increased and often contradictory scrutiny compared to her competitors. President Donald Trump called her “unlikeable” and a “monster,” siccing his followers on her. He said she was so far left of Bernie Sanders that she was a communist. Meanwhile, Sanders supporters crucified her for being a part of the Democratic establishment and not progressive enough.

This double standard drove Colbert to start collecting receipts. “The frustrating thing is a lot of the negative opinions that are formed about Kamala are based on disinformation and misinformation,” she says. “They’re not actually based on facts.” She started replying to individual Twitter trolls who posted hateful or misleading claims. The people badgered on. Then, she began writing lengthy Twitter threads addressing common false narratives, using news articles, video interviews, and lists of bills on the Senate website. (She still responds to trolls occasionally, albeit with something quick, like a “Fcuk off.”)

This documentarian persistence isn’t unique to her, she says. It’s a trademark of the KHive. “You’re going to see receipts,” she says.

The driving reason that Harris continues to be so distinctly scrutinized from all sides, Krishnan argues, is due to her hyphenated identity. “She has that triple whammy — she is a woman, a woman of color, and a Black woman,” she says. (Last summer, after Harris was announced as Biden's running mate, Facebook and Amazon removed memes and merchandise that featured racist, sexist, and graphic content targeting her.)

In response, her supporters come from different racial, gender, and ethnic backgrounds, building an intersectional community. “All of these people took on the mantle of fighting disinformation and misogynoir on social media,” says Krishnan, who's Indian American. “That's how it started, but then [the name] became a badge. It became a term for an extended family of Kamala Harris supporters.”

Some of those friendships have extended into real life. Others plan to meet after the pandemic for in-person celebrations. Krishnan watched the 2020 election returns in New Jersey with KHive comrades. "We gathered at the TV Asia headquarters," she says. "[We'd] all flown in from different places. ... And in a socially distanced manner, we sat in chairs apart from each other. These people had become my extended family. I'd never met [them] before."

On Jan. 20, when Harris took her oath of office at the inauguration, she became the first woman, the first woman of color, the first Black woman, and the first South Asian woman to be vice president. She’s also the first stepmom in the role, the first “Momala.”

To Courtney Phillips, co-founder of the grassroots organization Mamas for Kamala, Harris’ motherhood emphasizes another way in which she’s intersectional. “There are so many things about who she is that ruffle the feathers of people who have a traditional view of what a politician should be, what a president should be, what a woman should be,” says Phillips, a white 33-year-old, who joined the KHive in 2017. As the mother of a 5-year-old daughter, she’d heard rigid expectations in parenting communities. The attacks about Harris’ parenting started to sound familiar. “It feels personal,” the North Carolina resident says.

Throughout our conversations, I have one nagging question: Harris will be second in command to the most scrutinized office in the world. How will the KHive judge her politics, especially when she, inevitably, has to make unpopular decisions? Phillips is confident she won’t disappoint them. “We trust whatever she's going to do,” she says. “If she says something, we're on board with it.” Krishnan echoes that same unwavering trust: “She's going to be a voice for social justice, so we're in it for the long run, whatever that is.” Krishnan has to cut our interview short, as she has to prepare for another phone call. Kamala Harris, she tells me, is calling.

More like this
Savannah Guthrie Got Her First-Ever Tattoo With This Former Wild Child
By Suzanne Zuckerman
Jessica Simpson On The Time She Was Pursued By A Backstreet Boy & An *NSYNC Member
By The Editors
At 28, Rosie Perez Risked Her Career To Stop Playing Stereotypes
By Gabrielle Bondi
Eurovision Has Been Given A Whole New Look Ahead Of Its Liverpool Debut
By Bustle UK
Get Even More From Bustle — Sign Up For The Newsletter
From hair trends to relationship advice, our daily newsletter has everything you need to sound like a person who’s on TikTok, even if you aren’t.