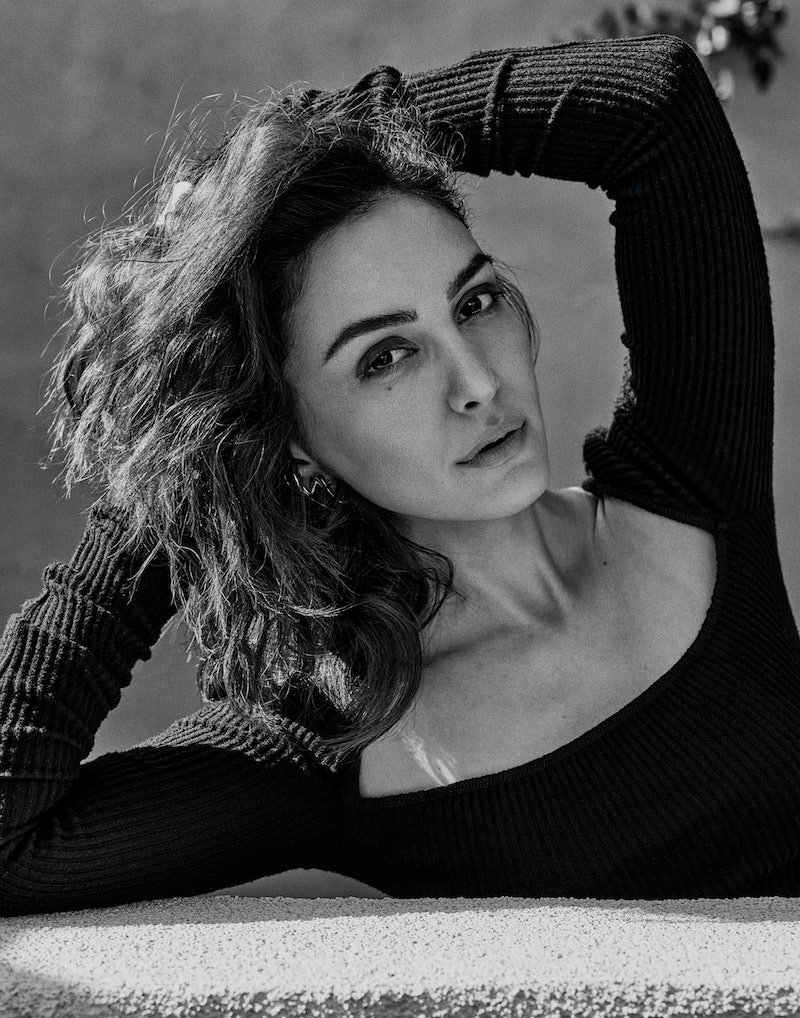 Nazanin Boniadi was 23 when she upended her 10-year plan. Medical school was the next natural step for the recent pre-med graduate from the University of California at Irvine, but her mind was racing toward something else. “I wanted to go to med school because that's what every good Persian girl does,” she tells Bustle. “I wanted to help people.” But she also wanted to be an actor.

Breaking that kind of news to immigrant parents is never easy, especially when your father fled his home country, Iran, to escape execution. “I called my dad and said, ‘Thanks for putting me through college, but I really want to go act,’” she says. “So I basically told him, ‘Just give me a little bit of time. Give me a year.'" He was worried, Boniadi adds, about the potential job stability.

Since that decision almost 17 years ago, she’s had a steady rise — "not meteoric," she says — in Hollywood, including roles on General Hospital and in procedurals and crime dramas before landing a stint on the sitcom How I Met Your Mother, where she played Nora, a peppy journalist who finally pulls perennial womanizer Barney Stinson (Neil Patrick Harris) out of his brosky ways. But she’s also followed her father’s activist footsteps, both on screen and off. On screen, it required pushing against typecasting.

“It was the first time in my career where I was just playing a girl,” she says of Nora. “There's so much stigma associated with the portrayal of Middle Eastern characters, or just being Middle Eastern these days,” adds Boniadi, now 41, who’s since joined political dramas like Showtime’s Homeland and ABC’s Scandal. “When you can portray a character that’s just a girl falling in love, that in itself is a baby step of victory.”

Her latest project, on Amazon Prime's Lord of the Rings prequel, is rumored to be focused on the woodland elves. Her role, which hasn't yet been announced, shouldn't require a geographically ambiguous Middle Eastern accent; she shouldn't need to study counterterrorism for character preparation. She was shooting Lord of the Rings in New Zealand when COVID-19 hit, sending her across the Pacific, back to Los Angeles, to quarantine at home with her mother.

In a year of disasters — a pandemic, World War III scare, countless wildfires — she’s using the mandated pause to lean into her other calling: human rights advocacy. In June, she was named an Amnesty International ambassador. “[Her] fearless determination has advanced the rights of women and refugees in Iran and across the globe,” said Congresswoman Nancy Pelosi earlier this month when honoring Boniadi for a humanitarian award.

Boniadi was born in Tehran in 1979, around the beginning of the Iranian Revolution, which resulted in a religious republic with authoritarian tendencies, in which dissidents were persecuted and killed. Boniadi’s father was one such dissident. “It was a matter of, if we don't escape, my dad could be executed,” she says. “His friends were being executed, and [my parents] didn't want to raise a daughter in a social, legal, and political climate that was growing increasingly oppressive toward women and girls.”

They escaped to London a month later, where her uncle lived at the time, but Iran was never far from their minds. Boniadi's father read her poetry by 14th-century Persian poet Hafez. At as early as 5 years old, she’d watch the news and track conflicts in the Middle East. Her parents sent her to Saturday Persian school so that she could master the language, despite being raised nearly 3,500 miles away. “When you're born into a situation like that, it informs everything about you,” says Boniadi, who now splits her time between London and Los Angeles.

She has no plans to return to Iran, fearing that her advocacy work with the Center for Human Rights could put her in danger, but it’s a compromise she’s willing to make. Last year alone, the Iranian government executed 251 people. In November, it announced the execution sentences for three 20-something protesters, one of whom says their confession was coerced. Like many activists, Boniadi used her platform to call for leniency. (Ultimately, their executions were stayed, but they’re still imprisoned.) This fall, she's calling for the release of Iranian human rights lawyer Nasrin Sotoudeh, who was hospitalized this month after a six-week hunger strike. She's since been returned to a Tehran prison.

The flip side of being involved in human rights work, Boniadi says, is the pain of watching the world's apathy. “It makes me question everything,” she says. “What would it take for people to [care about] the suffering of the people in the Middle East?”

Last July, she visited the Calais and Dunkirk refugee camps in France, which are notorious for hellish conditions. She felt an instant connection to the people there, she says. Two weeks after her visit, the French government bulldozed the Dunkirk camp.

I ask if any moments from those trips stuck with her. She tells me a story of a young boy, around 8 years old, whom she met at the Dunkirk camp. His family had fled Iran because they were facing persecution, as hers had, and they had been stuck in the camp for close to 10 months.

“What do you want to be when you grow up?” Boniadi asked him.

More like this
Watch Jacinda Arden’s Devastatingly Honest Resignation Speech
By Sam Ramsden
At 28, Rosie Perez Risked Her Career To Stop Playing Stereotypes
By Gabrielle Bondi
Twitter Is Identifying With Sally Field & Jane Fonda’s Friendship In New Viral Video
By Jake Viswanath
24 History-Making Black Women You Probably Didn't Learn About In School
By Ayana Lage and JR Thorpe
Get Even More From Bustle — Sign Up For The Newsletter
From hair trends to relationship advice, our daily newsletter has everything you need to sound like a person who’s on TikTok, even if you aren’t.