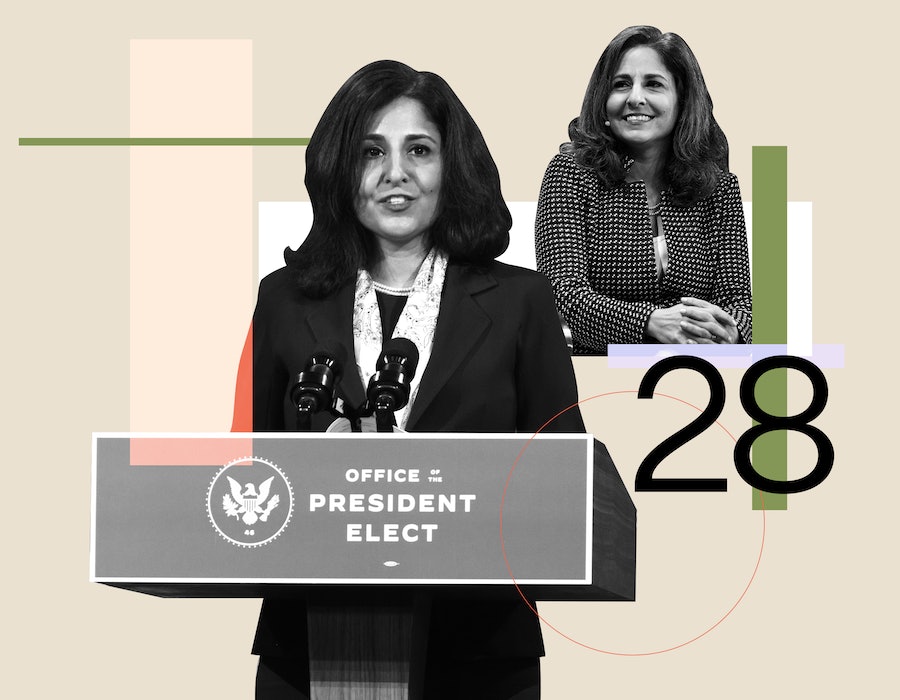 In Bustle’s Q&A series 28, successful women describe exactly what their lives looked like when they were 28 — what they wore, where they worked, what stressed them out most, and what, if anything, they would do differently. This week, we hear from Neera Tanden, Joe Biden's Cabinet nominee to lead the Office of Management and Budget. If confirmed, she'll be the first woman of color to helm the department, which prepares the administration's budget.

When Neera Tanden was 28, she joined Hillary Clinton’s 2000 campaign for Senate, following the first lady from the West Wing, where Tanden had served as a policy adviser on children and family issues, to the campaign trail. The '90s were coming to an end. It was the waning days of the Clinton administration. And that season, the summer of 1999, Tanden was also getting married.

In the decades since, Tanden, now 50, has become a mainstay in Democratic politics, most recently as the president of the liberal think tank the Center for American Progress. If confirmed to Biden's Cabinet, it would be her third time working in the White House. (During Barack Obama's presidency, she helped craft the Affordable Care Act as a senior adviser in the Health and Human Services Department.)

“I know it sounds totally corny, but I walked into the White House every day with a sense of awe,” says Tanden, whose parents were Indian immigrants and whose mother relied on food stamps and subsidized housing after their divorce. As a resident of Washington, D.C., last week's events shook her. "[The] violence was more than a riot directed at lawmakers — it was an assault on our democracy,” says Tanden, who also worked on Clinton's 2008 and 2016 presidential campaigns. “To see the Capitol — the People's House — under siege by many violent extremists was harrowing, terrifying, and truly heartbreaking ... We must ensure it never happens again.”

Tanden is viewed as the most contentious of Biden's Cabinet nominees, due in part to her vocal Twitter presence, through which she's aimed ire at President Trump, Republican lawmakers, and the progressive left. (In the last month, she's deleted more than 1,000 tweets, according to CNN.) In anticipation of her Senate hearings, she talks to Bustle about her online candor, life at 28, and being embarrassed by Mom (we relate).

Why did you want to work for Hillary Clinton, first at the White House and then on her campaign?

I understand from my own experiences how important child care is for working families. One of my earliest memories is my mother dropping me off at child care when she was trying to look for a job. I was motivated to work on those issues. And, of course, Hillary is an incredible policy wonk. I learned a lot from her. When she chose to run for Senate, she asked me to work on her campaign, and I thought of the many ways she had advocated for policies that helped children and families. The Senate race came like [an] extension of her policy work.

You were 28 at the time. What were your biggest problems then?

And Secretary Clinton threw you a wedding shower at the White House.

It was my fiancé, close friends, the people I worked with, and my mom, who had never been to the White House. Hillary goes up to my mom and says, "You must be so proud of Neera." My mom says to her, "Well, most of Neera’s friends are at law firms making a lot more money." I felt like things were moving in slow motion, sort of like seeing an accident happen in front of you. Hillary is undaunted. She says to her, "Well, Neera is actually making laws, and they're at law firms interpreting laws." I wasn't really making laws — I was helping [others] make laws. Then my mother said to her, "Yeah, but some of her friends are making partner." [Laughs.] Later, Hillary asked me, "Are you doing OK financially? Is everything OK?"

You're known for being honest and for not shying away from criticizing those you disagree with. Did you feel as comfortable speaking your mind when you were 28?

In the White House, I think people saw me as a little meek! [Laughs.] I grew a lot in the campaign and I grew a lot over the last 20 years. It's important for women, and women in positions of leadership in particular, to feel comfortable being direct. That's not easy. It was something I picked up working in the first lady's office, where that was encouraged.

What’s something you learned about politics then that you've carried with you today?

It's important to focus on exactly how policies are going to help people. What is the problem [the policies] are solving for? How will they address them? How can you make them work most effectively? That's muscle tissue I built then, which I've used throughout my career.

Amid all this — working at the White House, on an intense campaign, and planning a wedding — what was your guilty pleasure?

Oh, I ate terrible food. I had like 10 Diet Cokes a day. I eat much better now.

More like this
At 28, Rosie Perez Risked Her Career To Stop Playing Stereotypes
By Gabrielle Bondi
Pamela Anderson Is Still A Hopeless Romantic
By Ilana Kaplan
Delia Cai’s Small-Town Romance Goes Beyond The Tropes
By Samantha Leach
Savannah Guthrie Got Her First-Ever Tattoo With This Former Wild Child
By Suzanne Zuckerman
Get Even More From Bustle — Sign Up For The Newsletter
From hair trends to relationship advice, our daily newsletter has everything you need to sound like a person who’s on TikTok, even if you aren’t.