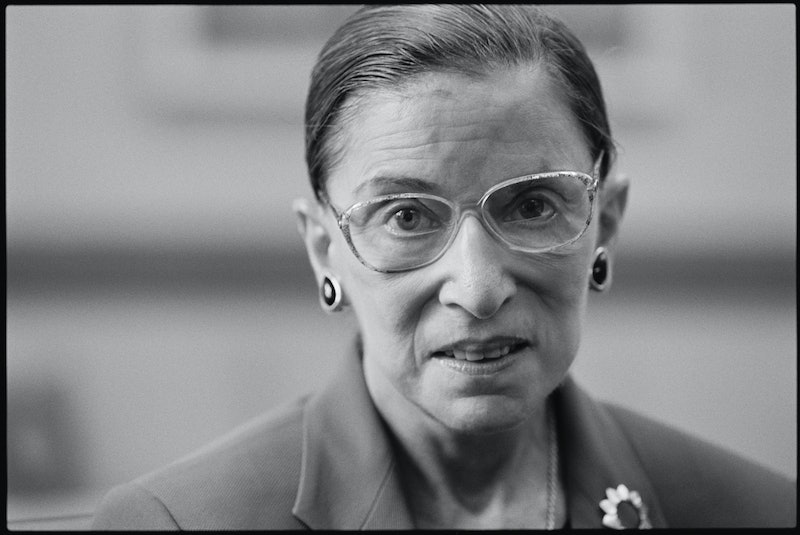 On Oct. 15, a group of civil rights heavyweights — the American Civil Liberties Union, the Leadership Conference Education Fund, the National Women’s Law Center, and TIME'S UP — joined together to create a video honoring the late Justice Ruth Bader Ginsburg, who passed away in September from complications of metastatic pancreatic cancer. The video includes celebrities such as Courteney Cox, Whoopi Goldberg, Selma Blair, America Ferrera, Roxane Gay, and Aurora James, among others.

In the video, they read Ginsburg’s own words, starting with her 1993 hearing in front of the Senate Judiciary Committee. The video’s publication aligns with the current Supreme Court hearing for Judge Amy Coney Barrett, who was nominated by President Trump to take Ginsburg’s seat on the high court.

If confirmed to the bench, she will be the third Supreme Court justice who assisted with Bush v. Gore, the case that decided the 2000 presidential election in President Bush’s favor. Trump has already noted his wish to confirm Coney Barrett before Election Day, in case this presidential election is also sent to the Supreme Court. In the video, Ginsburg’s words from her Bush v. Gore dissent are included: “The Court’s conclusion that a constitutionally adequate recount is impractical is a prophecy the Court’s own judgment will not allow to be tested,” she wrote. “Such an untested prophecy should not decide the Presidency of the United States. I dissent.”

The video concludes with the words “Elections have consequences. Vote.”

In a press statement announcing the video, Tina Tchen, president and CEO of TIME’S UP Foundation, said, “Women who today enjoy more rights and freedoms than our mothers did are Justice Ruth Bader Ginsburg’s living legacy. In her honor, in honor of our caregivers, frontline workers, the more than 200,000 American lives lost to the COVID pandemic, and on behalf of the rights of all people across this great country — we must be sure to vote," Tchen said. “Everything we care about is at stake.”