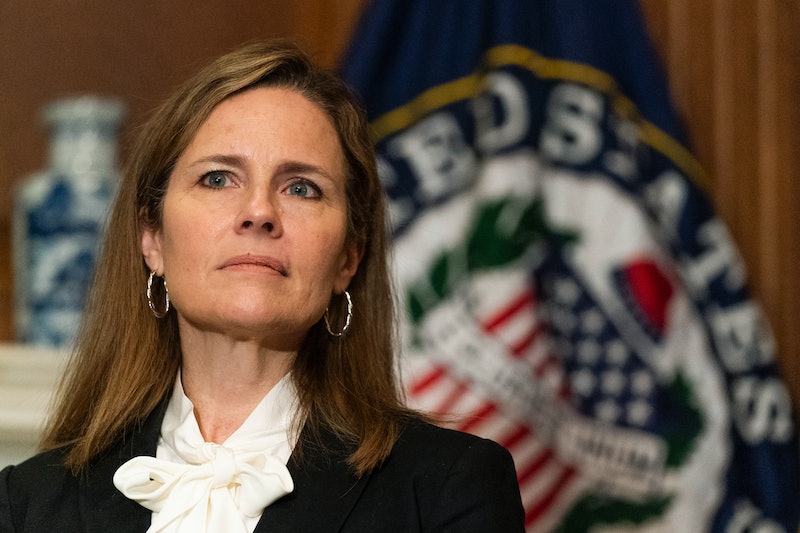 On Friday morning, President Donald Trump announced on Twitter that he and Melania Trump had tested positive for COVID-19, less than a week after a ceremony at the White House Rose Garden in which he nominated Amy Coney Barrett to the Supreme Court. In the 36 hours since, multiple people from the Rose Garden event have also tested positive for the coronavirus, including Hope Hicks, the University of Notre Dame's president, and Sens. Mike Lee and Thom Tillis, both of whom sit on the Senate Judiciary Committee. Still, Senate Majority Leader Mitch McConnell intends to move forward with a quick confirmation process for Coney Barrett.

Republicans are eager to get another conservative justice on the bench. Democrats, in turn, have called hypocrisy, referencing the events of 2016 when McConnell refused to consider President Obama’s nominee, Merrick Garland, in a presidential election year. McConnell now says that there’s enough time before Nov. 3 to confirm a justice two times over. On average, the whole thing usually takes about 70 days from nomination to confirmation.

Here’s a quick breakdown of the steps to confirm a Supreme Court judge, bearing in mind that timelines could change given the COVID-19 diagnoses.

The president’s nomination first goes to the Senate Judiciary Committee, where members typically spend about a month doing research on the candidate, which precedes a hearing. Barrett’s hearing is scheduled for Oct. 12, so the committee will have a condensed timeline for its investigation.

At this stage, the committee is looking at everything Coney Barrett brings to the table: her qualifications, her legal philosophy, how peers and the public might view her, and whether she’d diversify the court. That can mean looking at things like diversity of thought, religion, party affiliation, or demographic representation. The committee will also work with the FBI to gather materials from past jobs. For example, Justice Brett Kavanaugh had to provide 120 pages of written-out answers and 17,000 pages of other documents. They also requested files from his time working for the White House and had former President George W. Bush send in records.

The nominee meets with senators

While the Senate Judiciary Committee is gathering information, the candidate will usually meet with senators, guided by a Senate "sherpa," who leads them around Capitol Hill and introduces them to legislators. Barrett, who doesn’t have a sherpa, is being accompanied by White House officials instead. These meetings are mostly informal, says Susan Bloch, a professor of constitutional law at Georgetown University Law Center. The goal is to put a face to a name, she says. As of Oct. 2, Coney Barrett had met with a few Republican senators, including Sens. Lee, Joni Ernst, and Kelly Loeffler.

In 2016, McConnell refused even to meet with Garland — and some Democratic senators are planning to return the favor in kind. “McConnell has made everything more political,” Bloch tells Bustle. Senator Kirsten Gillibrand (D-NY) has said she won’t meet with Barrett. “This nomination process is illegitimate,” she wrote on Twitter on Sept. 27. “I refuse to participate in the further degradation of our democracy and our judiciary.”

With her hearing scheduled for Oct. 12, it’s likely that Coney Barrett is already prepping. The committee will ask her questions about her qualifications, in a process that usually lasts a few days. Barrett’s is slated for four. “These hearings have been pretty intense for almost everybody, and everyone prepares really intensely,” says Bloch, who was part of the prep team for the late Justice Ruth Bader Ginsburg. “They have mock hearings at the justice department, [where] they invite law professors to come in and play the role of senators.”

After this step, the committee moves the process forward to the full Senate chamber, noting whether or not they give the nominee their recommendation, which is based on a majority vote. The committee is expected to vote on Coney Barrett's nomination on Oct. 22. Then, the entire Senate debates and votes on the nominee. A majority vote — 51 out of 100 senators — is required. In the case of a 50-50 tie, the vice president casts the tie-breaking vote.

Likely, no. Back in 2017, McConnell essentially eliminated the ability to filibuster a Supreme Court nomination. Democrats could invoke something called the “two-hour rule,” a bureaucratic move that doesn’t allow Senate committee meetings if the chamber has been in session for two hours already that day or is in session after 2 p.m. (Committees could then schedule morning sessions.) Senators can also object to recess, or ending a business day, because doing so requires that all 100 senators agree. A host of other bureaucratic ways can attempt to delay the final vote, but Democrats likely can’t prevent it altogether.