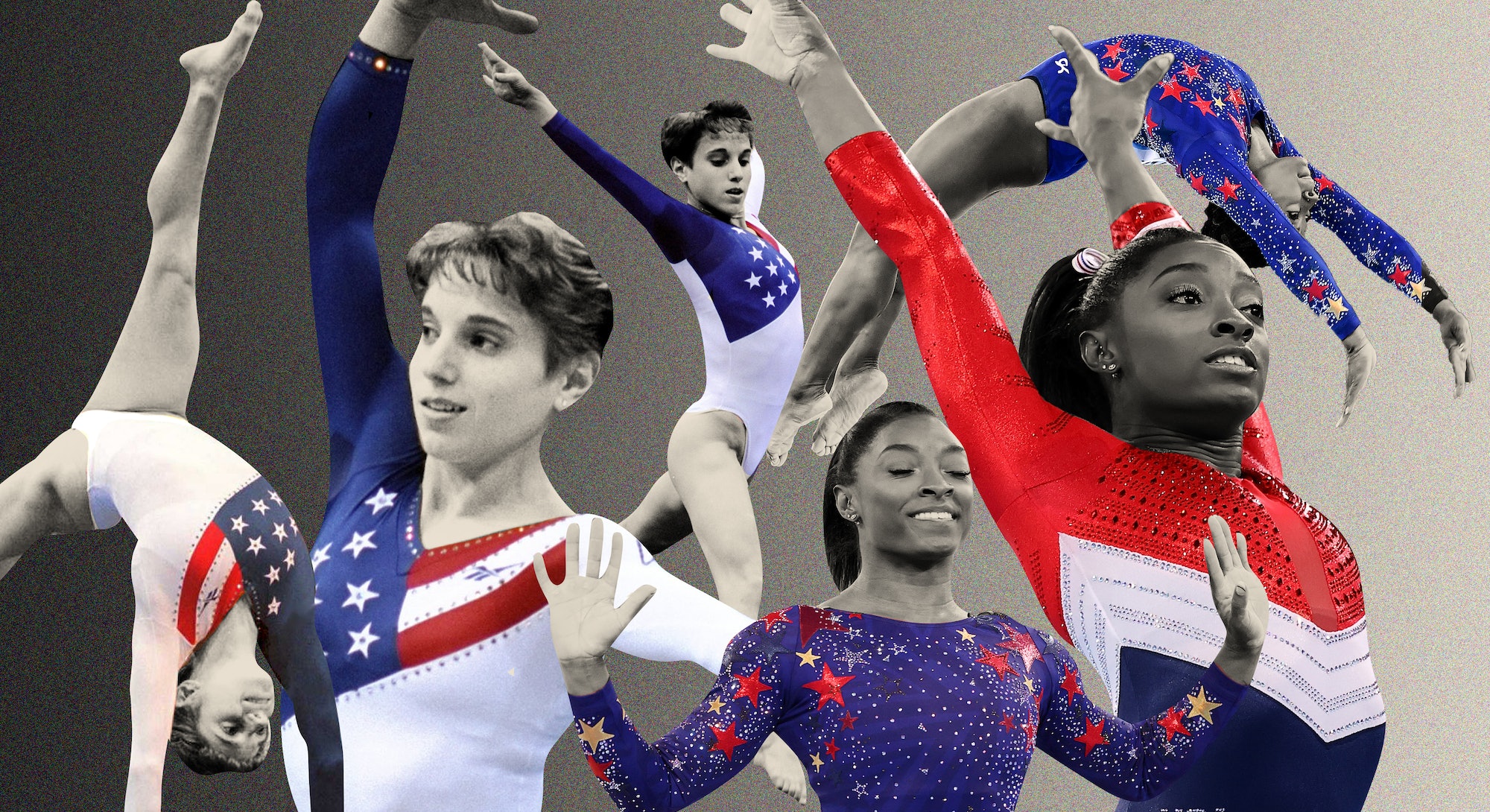 Atlanta, 1996, you know the scene: Kerri Strug was the final American gymnast to compete in the team competition, which the Russians were the favorite to win. It all came down to Strug — just 18 years old, only 4-foot-9, muscular, blonde, dressed in a star-spangled leotard. She rocketed down the vault runway to perform a Yurchenko with one-and-a-half twists. As she fell on her landing, she heard a snap in her ankle. She limped back to her starting position, asking coach Béla Károlyi — burly, mustached, a drill sergeant in a nylon tracksuit — if it was really necessary to do a second vault. After a short conference, she lined up to vault again. Károlyi was known for his intimidating demeanor, but Strug maintains she wanted to try for a score that would guarantee a team gold.

Wincing, she delivered a second Yurchenko (impeccable, this time), hopped to one foot, saluted the judges, then collapsed onto the mat in pain. Károlyi scooped her up in his arms and carried her away to get medical attention by a little-known doctor named Larry Nassar. In the rush to the medal stand, Strug didn’t have time for X-rays; she didn’t even have time to put on pants. In the most famous photo of the team, the Magnificent Seven are draped in gold medals and holding bouquets of flowers. Strug’s bandaged leg stands out like a spotlight. That image was plastered on the Wheaties box and still hangs, framed, in countless gyms across the country today.

Strug’s second vault has been endlessly invoked since Simone Biles withdrew from the team final and all-around final at the Tokyo Olympics for mental health reasons after struggling to vault safely on Tuesday. Biles had lost her sense of where she was in the air (a case of what gymnasts call the “twisties”), she later said, which put her at risk of injuries graver than Strug’s severe sprain and ligament damage. To some, Biles’ decision was evidence of insufficient grit or nationalism; unlike her predecessor, she was unwilling to put her body on the line for the glory of her country. But to anyone who was inspired by Strug as a child — and who learned as an adult about the foundation of abuse underlying American gymnastics — Biles’ decision is a hopeful sign that the sport might continue to flourish without breaking its young stars.

It’s hard to overstate the extent to which Strug’s injury came to symbolize her team’s achievements, the beginning of an era in which Team USA dominated the international gymnastics scene. She was on the cover of Time and People. She spoke to President Bill Clinton on the phone and later was invited to visit him at the White House. She appeared on Saturday Night Live, Beverly Hills 90210, The TODAY Show, and Dateline. As she told Jay Leno in an appearance on his talk show, she got to fly first class for the first time. She was styled by DKNY. Leno’s team gave her a Tiffany bracelet.

Biles lost her sense of where she was in the air, she later said, which put her at risk of injuries graver than Strug’s severe sprain and ligament damage.

A wave of young athletes across the country signed up for gymnastics lessons that year (I was one of them), and Team USA went on to win two gold, three silver, and one bronze team medals. American women have since won five consecutive gold all-around medals, including Simone Biles in 2016 and Sunisa Lee in 2021. Strug and her teammates wore simple, star-spangled leotards; by 2016, the Final Five’s team leotards were studded with 4,000 Swarovski crystals — and that’s nothing compared to the leotards worn July 27, which shimmered with 76 stars and 7,600 Swarovski crystals. While Strug’s Yurchenko involved a single flip with one-and-a-half twists, Biles typically performs an Amanar, a version with two-and-a-half twists. Earlier this year, she debuted a Yurchenko double pike, containing an eye-popping two-and-a-half flips (no woman has ever attempted the stunt in competition).

Most gymnasts share the experience of sitting in front of the TV as a little kid, transfixed, watching an athlete swing, soar, and stick landings. Kerri Strug was one of them. As a child growing up in Tucson, Arizona, she idolized Mary Lou Retton, who won the individual all-around title in 1984 at age 16. By 8, Strug had begun competing, and at 13, she made the difficult decision to leave her family behind and move to Houston, Texas to train with the famously demanding and successful Károlyi. (His first protégé was Nadia Comăneci, who earned the sport’s first “perfect 10” and was Retton’s inspiration for starting lessons.) At 14, Strug was the youngest athlete named to the 1992 Olympic women’s gymnastics team. She came home from Barcelona with a team bronze medal and fought a slew of injuries before being named to the 1996 Olympic team.

As Strug later told the Huffington Post in 2015, the media accurately portrayed her as a gymnast who had a lot of talent but wasn’t mentally tough enough to perform when it counted. “I would always falter when all eyes were on me,” she said. Her vault injury ended that perception, but prevented her from competing for additional medals in Atlanta and effectively ended her athletic career. She studied at UCLA and Stanford, and earned a master’s degree in sociology. She worked as a second grade teacher in San Jose, California, before moving to Washington, D.C., where she has held a variety of federal positions since 2003. She married Robert Fischer, an attorney, and had two children. According to her Instagram, she and her childhood icon Retton now hang out. Strug’s 1997 memoir, Landing On My Feet: A Diary Of Dreams, is currently being adapted into a biopic directed by Olivia Wilde and starring Thomasin McKenzie.

Strug has only shared positive sentiments about her life-changing vault. “That vault signifies a lot more than people understand, because finally, when all eyes were on me, I dealt with the pressure, and now, how I view myself and what I’m capable of is very different,” she told TODAY in 2016. But no gymnastics retrospective made in 2021 can be as simple as fun flips and Olympic glory. (This reality shaped Head Over Heels, my 2020 novel set in the toxic world of elite gymnastics.) The sport has been in an era of intense reckoning since 2016, when it came to light that Nassar was a serial sexual abuser who preyed on the young gymnasts in his care as the national team’s sports medicine doctor. He is currently serving at least 300 years in prison for federal child pornography charges, sexual assault, and molestation after more than 265 women made allegations against him. Meanwhile, Béla and Marta Károlyi have shuttered their training center in Texas amid lawsuits alleging verbal, emotional, and physical abuse, as well as allowing “Nassar to have unfettered and secluded access to minor children.” USA Gymnastics proposed a $215 million settlement to athletes who survived Nassar’s abuse, but Biles and two-time Olympian Aly Raisman have criticized this plan, as it would prevent further investigation into the systemic abuse.

In a sport that encourages athletes to be obedient and silent, Biles has a long history of speaking up for herself. In her 2016 memoir Courage to Soar, she recalls refusing to buckle to Marta Károlyi’s demands that she perform an Amanar. Pushing back against either Károlyi was essentially unheard of. But as Biles wrote, “I knew that I wasn’t ready for it. You have to trust your body, your instincts. And you also have to protect yourself. If I could have done it and just fallen, then yes. But I would have done it and actually got hurt. So I was like, no, there’s no way.”

Following the 2016 Olympics in Rio de Janeiro, Biles was unsure if she would want to attempt making the 2020 team. But, she told TODAY’s Hoda Kotb in April, “I had to come back to the sport to be a voice, to have change happen. Because I feel like if there weren't a remaining survivor in the sport, they would have just brushed it to the side. But since I'm still here, and I have quite a social media presence and platform, they have to do something. So, I feel like, coming back, gymnastics just wasn't the only purpose that I was supposed to do." As of 2021, Biles is the only open survivor of Nassar’s abuse who is still competing in gymnastics at the Olympics.

In a sport that encourages athletes to be obedient and silent, Biles has a long history of speaking up for herself.

Now that we know what it looks like when a gymnast is empowered to prioritize her own safety and longevity, it’s hard to watch Strug’s sacrifice. On Facebook, Byron Heath, the father of two young gymnasts, described showing his daughters Strug’s iconic moment, expecting to relive the thrill of watching live 25 years ago. Instead, his daughters were confused and he was horrified by how the scene looked from his vantage point in 2021. “I wasn't as inspired watching it this time,” he wrote. “In fact, I felt a little sick. Maybe being a father and teacher has made me soft, but all I could see was how Kerri Strug looked at her coach, Bela Karolyi, with pleading, terrified eyes, while he shouted back ‘You can do it!’ over and over again.” Heath’s post has been shared 518,000 times.

In a candid moment during her 2015 interview with the Huffington Post, Strug marveled at the lasting impression of her iconic vault. “You know, I’m not kidding myself,” she said. “There are lots of Olympians and lots of gold medalists, but it’s those athletes who have that special performance that stick with us.” The future of gymnastics is on the shoulders of the kids sitting in front of the TV this week, watching the competition unfold and turning cartwheels in the living room. Will they see Biles’ self-preservation, her determination to put her safety and well-being first? Will they admire the way she cheers on her teammates? Just like Comăneci’s perfect 10 inspired Retton’s all-around medal, who influenced Strug’s famous vault, I know Biles’ character will stick with the next generation of gymnasts. No performance required.