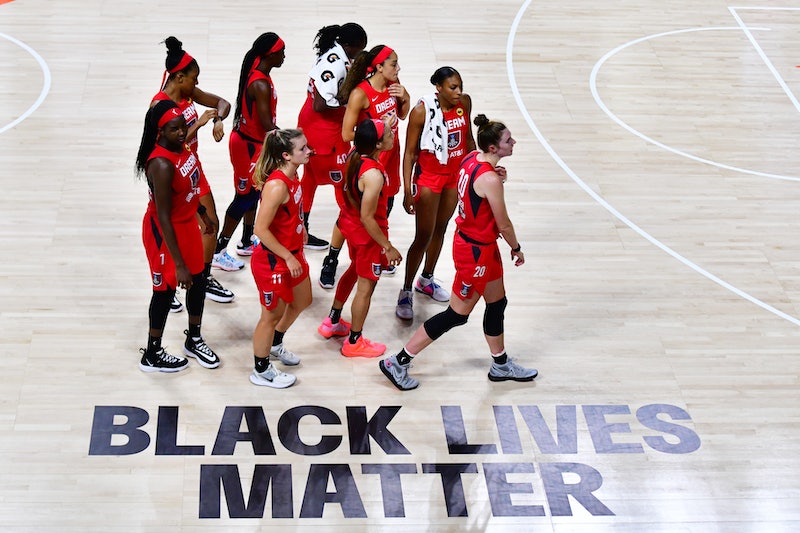 Following the news that Jacob Blake, a Black Kenosha, Wisconsin, resident, was shot seven times by police, leaving him paralyzed from the waist down, it wasn’t just protestors who took to the streets to demand accountability. Just weeks into their restarted seasons, athletes across leagues withdrew from games and matches, asking the country to pay attention to police brutality. Immediately following the Milwaukee Bucks’ decision to not play against the Orlando Magic, WNBA players decided not to play in Wednesday and Thursday’s games, instead taking a day for reflection.

As of Friday, NBA and WNBA players have decided to resume play inside their bubbles in Orlando and Bradenton, Florida, respectively, where teams are podded to minimize risk of coronavirus infection. But the players say there’s still work to be done to combat racial injustice.

The Atlanta Dream’s Elizabeth Williams, who announced the league’s first cancellation on Wednesday, tells Bustle about what’s at stake for WNBA players this season, what fans should know about their decision not to play, and the importance of rest.

What first went through your mind when you heard that Jacob Blake had been shot by police?

It was tough. I hate when videos [of police brutality] get shared because a lot of times, it's trauma. It's really triggering for a lot of people. I was angry when I first saw the video because I don't want to witness anything like that. For someone to feel like they're in a position where they can shoot someone in the back seven times, knowing there will probably be no consequences, that's hurtful.

How did the team start discussing the idea of striking, or joining in solidarity with the NBA? What were those conversations like?

It’s important to note that we started this bubble season with a commitment to social justice. We were the first game scheduled after the Bucks made their announcement, the Dream versus the Washington Mystics. When we went out on the court to talk to the Mystics players, they were already wearing T-shirts that spelled out Jacob Blake's name, with images of seven bullet holes in the back. Talking to them, we felt like mentally, nobody was ready to play. We ultimately decided to cancel the slate of games that night.

In your statement at that game announcing the cancellation, you said, “These moments are why it’s important for our fans to stay focused … and connect the dots between what we say and what we do.” Why might fans need that reminder?

This change isn't going to happen overnight. Some of the things that we want to see — arresting or convicting police officers [who use excessive force] — will be determined by the leadership that's in place. People don't realize that District Attorneys and Attorneys General are elected positions. We want fans to understand that by voting on every level, they can start to see the changes they’re looking for.

There’s also the fact that people see basketball as entertainment, when it’s so much bigger than that.

It's about the humanity of all of it. The hardest conversations we’ve had as players have been with mothers and sisters of women who’ve lost their lives to police violence. It’s not only the loss; it’s how they’re treated in death. It’s that their bodies were left outside, that their families were given bills by the city for their funerals. It hits home. It could have been us sleeping, or driving our cars. That’s when we ask, how do we fix this? How do we create a new system?

Collective action isn’t new for the WNBA — it was the first female professional sports league to form a union, for example. What is it like to be part of this history?

It's a bit ironic, because I'm super, super introverted, like pretty low-key. I always grew up not wanting to stir trouble. Obviously, this isn't trouble — standing up for people is morally the right thing to do — but it's also difficult. Deciding not to play was not an easy decision.

It's different for us as women. If LeBron James sneezes, he'll get a million retweets. Our platform is smaller. We’re constantly working to have air time. Having a season like this was a unique opportunity to constantly be on television because we're often fighting for the platform. For us, our power is when we’re seen. The conversation on Wednesday was about how, because we chose to play, ESPN committed to having us on air. So we had to ask if we chose not to play, how do we remain seen?

But we've been the leaders in this kind of work. We felt like whatever we did in response, we wanted to do it together.

You decided to take yesterday for rest and reflection. Why was that important for you?

We can't forget we're in a pandemic — that's the reason we're even playing in this bubble. Combine that with a renewed nationwide commitment to the fight against racism, playing basketball games every other day, and promoting a social justice movement. That's a big mental health strain. A lot of people’s self-care is being with their family or their spouse, with their kids — in a league that’s over 80% Black women, their family members are more than likely Black people. All of those layers played into this feeling that it would be really tough to go out on the court and perform at 100%. Not playing is an opportunity to use the day for ourselves, to step away.

What did you do for self-care yesterday?

I played video games with one of my best friends, [New York Liberty’s] Layshia Clarendon. We ordered Indian food and then we played this game called Borderlands. It was nice to feel like you're in that world, away from everything else, you know?

I’m so glad you got to take time for yourself. Looking ahead, what impact do you hope these strikes have?

We want these people in power to feel the pressure, to feel like their jobs, for some, are in jeopardy. We want people to feel some level of empathy. We want to see people applying pressure in those cases where families [of victims of police violence] have felt forgotten. Now, people are making phone calls and sending emails. We want to continue that, so we don’t have to repeat these hashtags.

More like this
Chelsea Woody On Shattering Stereotypes In Surfing
By Leah Groth
10 Times Boris Johnson Got It Wrong On Trans Rights
By El Hunt and Sam Ramsden
Zosia Mamet Opens Up About Her Eating Disorder
By Zosia Mamet
Ryan Reynolds Brought Some Famous Friends To Wrexham A.F.C's Last Game Of The Season
By El Hunt
Get Even More From Bustle — Sign Up For The Newsletter