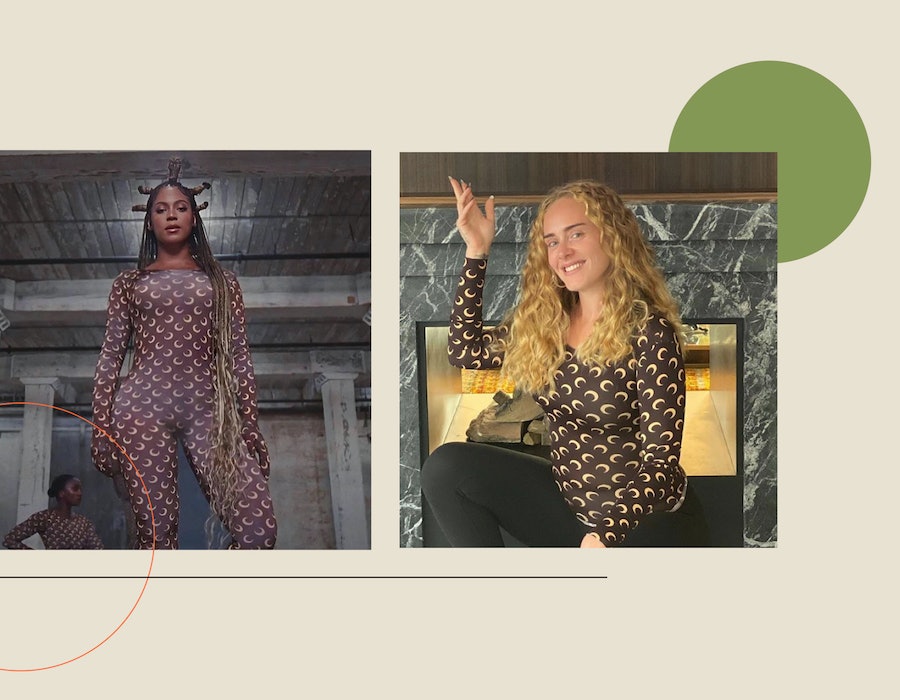 Beyoncé released her new visual album, Black Is King, on July 31 in partnership with Disney+. Almost immediately after, Adele, a huge star in her own right, showed off her membership in the Beyhive over the weekend, while matching with Beyoncé, of course.

Adele posted a photo on her Instagram account on Sunday posing in front of her fireplace, beneath her television that was playing the visual album. On screen, Beyoncé and her dancers are wearing Marine Serre bodysuits, all standing on wood boxes. Below, Adele is wearing the very same bodysuit. Her caption reads, “Thank you Queen for always making us all feel so loved through your art.” In her comments, Maisie Williams wrote, “drop the collab.” But…really, though...

This isn’t the first time Adele has professed her love for the Queen, however, as you likely remember her Grammy Awards acceptance speech in 2017, when her album 25 won over Beyoncé’s album Lemonade. In it she shared, “I’m very humbled and I’m very grateful and gracious, but my artist of my life is Beyoncé and this album to me, the Lemonade album, was just so monumental. All us artists here adore you. You are our light!”

She even went as far as to break off a piece of her award to give to Beyoncé. While no official collab is in the works as far as the public knows, here’s hoping the world gets one soon.

More like this
Beyoncé Wore A Golden Sheer Gown At Her VIP Dubai Concert
By Sam Ramsden
Hailey Bieber Looks Just Like Princess Diana & I Need To Copy Her ASAP
By Sophie McEvoy
Rita Ora Joined The Cut-Out Trend With These Bejewelled Butterfly Trousers
By El Hunt
Kate Middleton Wore The Ultimate '90s Power Suit
By Sam Ramsden
Get Even More From Bustle — Sign Up For The Newsletter
From hair trends to relationship advice, our daily newsletter has everything you need to sound like a person who’s on TikTok, even if you aren’t.