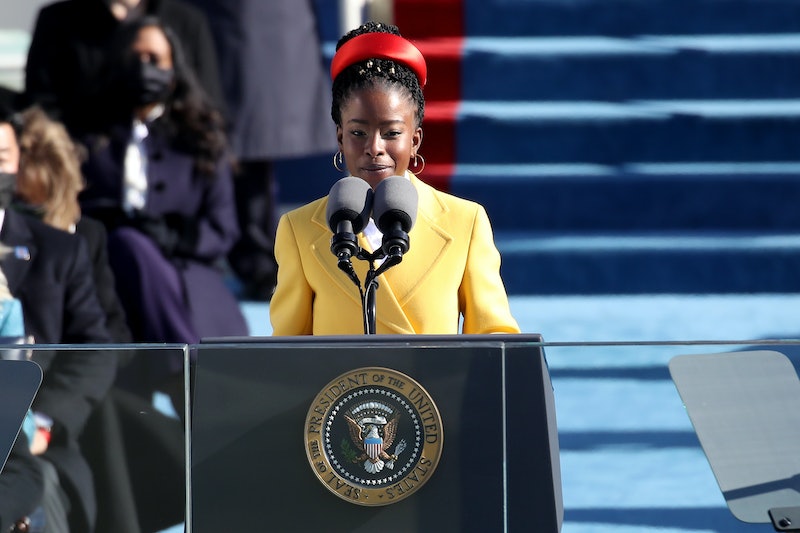 Amanda Gorman is the now first poet to ever perform at the Super Bowl, and she did so with her trademark vibrant, eye-catching fashion. The 22-year-old introduced an original poem titled "Chorus of the Captains" in a pre-recorded segment, and Amanda Gorman's Super Bowl 2021 outfit was just as memorable as her performance.

For the appearance, she wore an icy blue, iridescent coat by Moschino decked out with silver embellishments layered over a crisp white top. On the accessory front, she opted for understated circular silver earrings and a pearl headpiece that perfectly complemented her bold ensemble.

According to The New York Times, Gorman wrote this poem to honor the three people who were selected to be honorary captains and take part in the coin toss at the beginning of the game: Trimaine Davis, a Los Angeles teacher; Suzie Dorner, a nurse in a Tampa; and James Martin, a U.S. Marine Corps veteran from Pittsburgh.

As a poet, Gorman pays attention close attention to the details, which was clearly evident with her Super Bowl ensemble. She stepped out in a timeless red lip and icy blue eyeshadow that matched her coat.

Gorman's last highly-publicized appearance was for the 2021 Inauguration, where she delivered a powerful, original poem wearing a full Prada look. Gorman chose the colors red and yellow as a tribute to Shirley Chisholm, the first African-American to run for the U.S. Presidency and the first African-American woman elected to congress. She accessorized with a caged bird ring honoring Maya Angelou, a gift from Oprah Winfrey.

Gorman is thoughtful about her outfit choices, and her Super Bowl look was no exception.