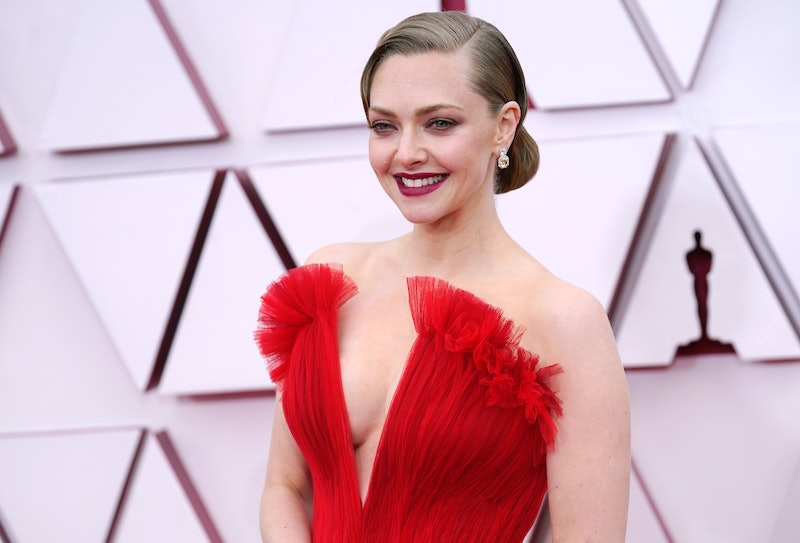 Amanda Seyfried matched the red carpet at tonight’s Oscars 2021 ceremony. The 35-year-old star, who’s up for Best Supporting Actress for her role in Mank, looked regal in her voluminous, tulle gown, which was a customized version from Armani Privé’s Spring 2021 collection. Seyfried paired the opulent ball gown with a deep red lip and a low bun with finger waves, recalling the glamour and sophistication of Old Hollywood — and perhaps a wink to the David Fincher-directed film for which she’s nominated.

While this is technically the first-ever Academy Award nomination for Seyfried (she’s up against against Olivia Colman, Glenn Close, Maria Bakalova, and Youn Yuh-jung tonight), it’s not the first time the Mamma Mia star has dazzled on the red carpet. Just earlier this year, Seyfried sported a coral, off-the-shoulder Oscar de la Renta gown for the Golden Globes, leaning into her Mank character by sporting the same kind of glamorous, Old Hollywood curls that actress Marion Davies wore.

Seyfried’s look for the Oscars came courtesy of her longtime stylist Elizabeth Stewart, makeup pro Genevieve Herr, and hairstylist Renato Campora, the latter of whom told People: “I was inspired by Amanda's character Marion Davies in Mank and her beautiful dress for this evening. I wanted a couture style of hair — precise and vintage.” Goal achieved.

More like this
Jennifer Lopez Wore A Naked Dress To The Shotgun Wedding Premiere
By Dominique Norman
Everything To Know About Amanda Seyfried's 'Thelma & Louise' Musical
By Jake Viswanath
12 Years Ago, Austin Butler Manifested His Oscar Nom In This Disney Movie Scene
By Jake Viswanath
Why Andrea Riseborough Is Confused By Her Oscar Nomination For Best Actress
By Jake Viswanath
Get Even More From Bustle — Sign Up For The Newsletter