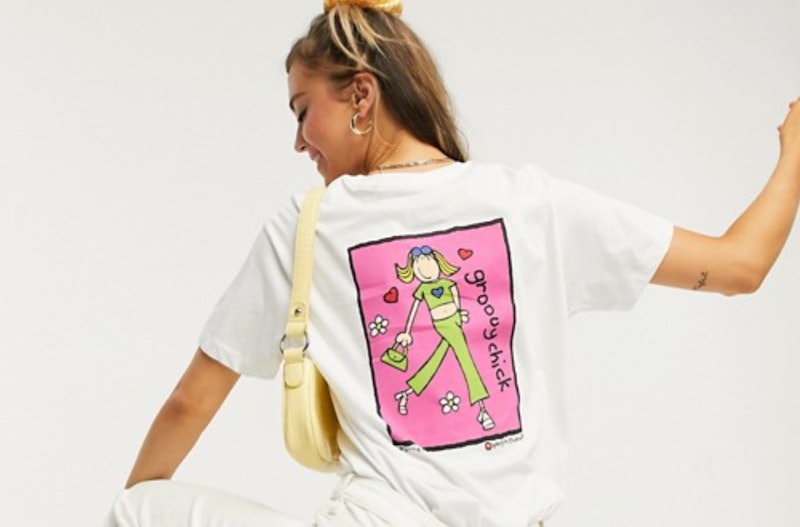 Ah the '90s and '00s. It was a simpler time back then, and those of us in our late twenties to early thirties will remember the age of Groovy Chick well. Created by Bang On The Door, Groovy Chick and her friends (I was a particular fan of the Funky Girl merch) grew up with us, and until now, may have been long forgotten. But now ASOS has brought back Groovy Chick, with the help of clothing brand Daisy Street.

Daisy Street, which is known for its fun tees and other clothing, has just unveiled two Groovy Chick tees on none other than beloved retailer ASOS, and they've already flown off the virtual shelves. With both styles already out of stock, I reached out to a rep from ASOS to discover whether the tees would be coming back into stock any time soon, and will report back once I hear.

Unsurprisingly, fans have gone wild for the styles, sharing their glee on Twitter. One user wrote: "I thought I'd never see her again... but here she is," while another added: "Wait, you can get Groovy Chick merch from ASOS??? I need it all immediately."

Groovy Chick was created 30 years ago by North London residents Karen Duncan and Samantha Stringle. Merch and clothing is still sold on the Bang On The Door website, so if you missed out on the first ASOS drop, head there.

Like ASOS, Bang On The Door sells Groovy Chick T-shirts, as well as a variety of other merch including tote bags, hoodies, the kind of drawstring bag you might have used for P.E. back in the day and even caps. There's also products featuring other favourite Bang On The Door characters like Pop Princess and Starlet.