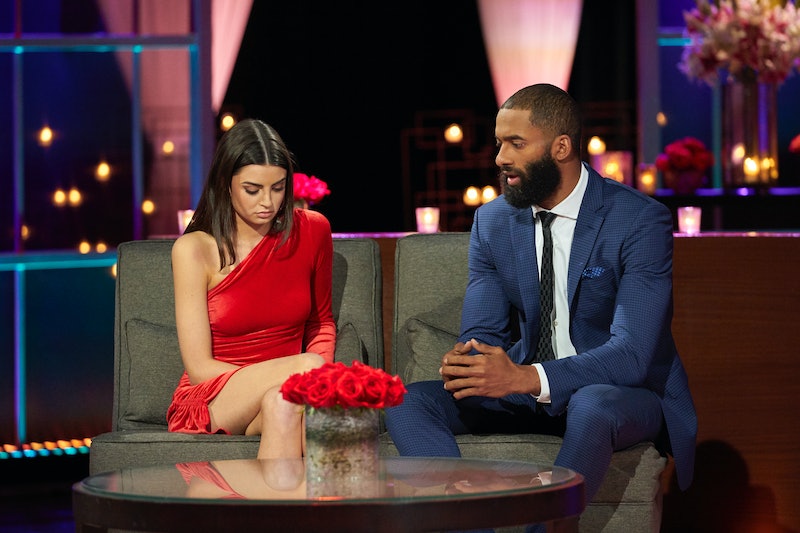 A little known fact about this season of The Bachelor? Matt James actually had an engagement ring ready to present to frontrunner Rachael Kirkconnell on the finale but he wasn’t emotionally prepared to give it to her. Though Rachael Kirkconnell’s engagement ring on The Bachelor never made its small screen debut, thanks to Neil Lane, some details are starting to pour in.

This week, viewers learned that James presented his final rose to Kirkconnell when the show was filmed. But later, once photos surfaced of her attending an Antebellum-themed party at a former slave plantation and wearing a Native American-themed costume — alongside tweets she allegedly posted making fun of a classmate for dating Black men — he broke off their relationship.

Before that revelation, James had worked with jeweler Neil Lane, who has a history of designing rings for the ABC franchise, to custom-make the perfect ring for Kirkconnell.

Still, even as James was meeting with Lane, the jeweler shared that the bachelor had cold feet. “In all the years I've been doing this on the show, I've never met someone who was dealing with the depth of what Matt was obviously going through," Lane told People. “Usually there's nervous excitement about the woman they've fallen in love with and excitement about picking out a ring, but it was a different feeling from Matt from the get-go and he let me know right away.”

Despite signing on to be The Bachelor this season, James wasn’t sure if he was ready for marriage after all. “He was torn and his thoughts were heavy — not because of the women but because of the experiences in his life." The jewelry designer said that they even had to take breaks while creating the ring for James to de-stress and re-compose because of his commitment issues stemming from his parents’ relationship problems.

James eventually chose a 3-carat pear-shaped diamond ring with a halo setting, mounted on a pavé eternity band that was set with over 175 diamonds. “He liked the almond shape of the diamond — it's classic and very feminine,” said Lane. “I left him with the ring — it was more of a promise ring — but I had no idea what was going to happen.”

Though the world now knows how everything unfolded, the ring is still out there for people to see — though it isn’t on the finger of Kirkconnell at the moment. And at this point, no one knows quite where it will end up.