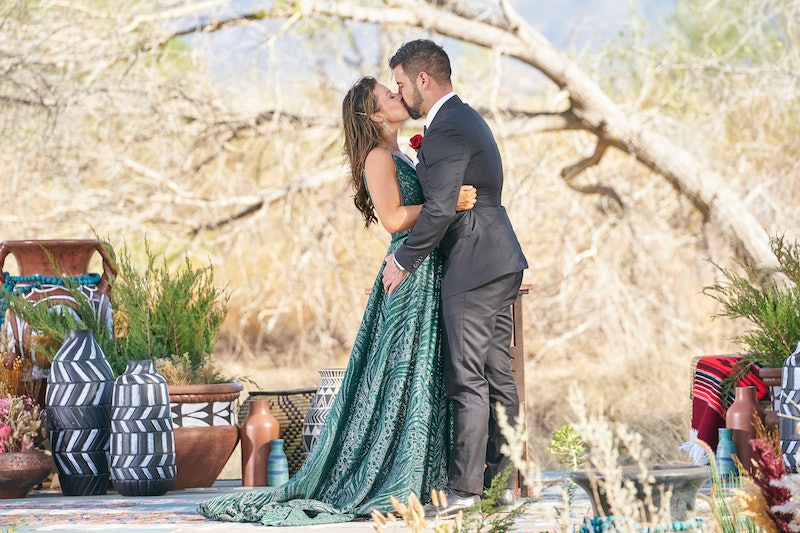 Season 17 of The Bachelorette has concluded with Katie Thurston finding love with Blake Moynes. And, of course, she was presented with a massive diamond engagement ring, from the show’s go-to designer, Neil Lane.

Thurston’s ring is a classic 2000s trend, with a large center oval-cut diamond and a shank set with smaller round-cut stones. In an exclusive interview with E!, Lane describes the engagement ring in detail, sharing that it’s handcrafted and set in platinum, with a diamond that is “centrally set within a crown motif and a hidden diamond halo.” What’s more, the shank is set with more than 90 smaller rounds, equaling a total carat weight of three.

The 2000s are coming back in more ways than just heeled flip flops and terry cloth track suits. Jewelry is harkening back to the decade — especially when it comes to engagement rings. Minimalism was key, with a large center stone void of baguette stones and set on an adorned shank of round-cut stones or pavé diamonds.

Moynes was a late addition to the crew, coming onto the show halfway through the season. He already appeared on two separate seasons of The Bachelorette with Clare Crawley and Tayshia Adams.

Only time will tell whether the duo will make it to the altar, but Thurston sure has a gorgeous engagement ring to represent her future journey there.