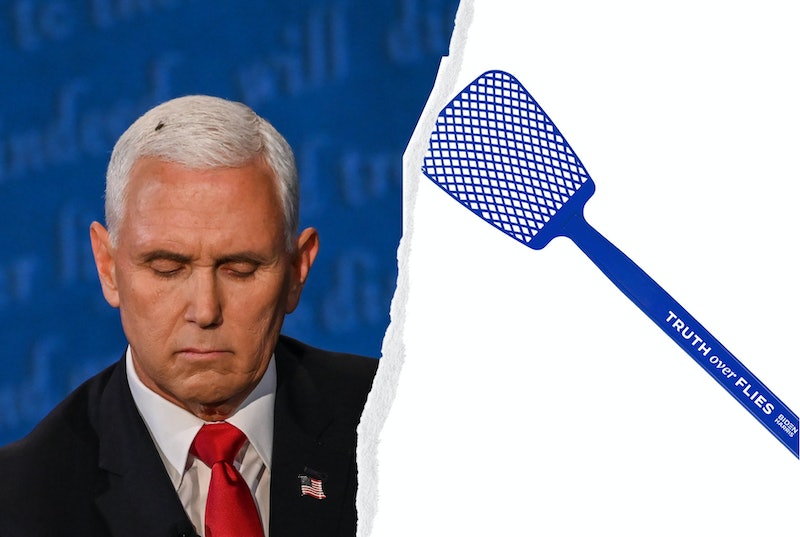 On Wednesday night, the Vice Presidential debate between Kamala Harris and Mike Pence inspired strong reactions on social media, with two particular moments standing out most. First, Harris responded calmly to Pence's multiple interruptions with the phrase "I'm speaking." It was a firm but graceful gesture that resonated with women who must contend with men talking over them in meetings, at dinner, and the like. And then, there was the fly. The insect landed atop Pence's head at the very moment he started denying systemic racism, and sat there for almost two minutes before flying away. Both incidents inspired "I'm Speaking" & Fly merch, with some items going live mere hours after the debate finished.

Much like the Presidential debate which led to "Will You Shut Up, Man?" merch, Wednesday night's event inspired new designs on sweaters, pins, and even face masks. But it was one particular item that everyone can't stop talking about: Joe Biden's "Truth Over Flies" fly swatter. It launched almost immediately following the debate and by midnight EST, the campaign already sold 15,000 swatters. As of press time, it's sold out.

While the numbers are impressive, the popularity of the Vice Presidential Debate merch isn't at all surprising. Many can relate to Harris' already-iconic phrase; perhaps it reminds them of parents calmly waiting for a two-year-old to behave after throwing themselves into hysterics. And, of course, viewers want to commemorate the fly, who everyone can agree was the real winner of the debate.

Scroll ahead and check out some of the best merch from the Vice Presidential debate for yourself.