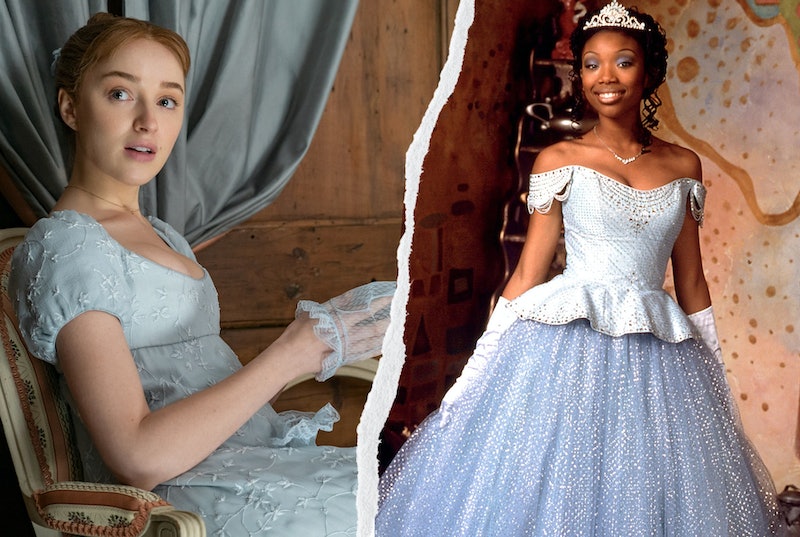 Take a look at the costumes from the hit Netflix series Bridgerton, and you might find yourself transported back to your childhood. The rich jewel tones, embellished necklines, and soft blue gowns are reminiscent of an old favorite: the 1997 Disney movie Rodgers & Hammerstein’s Cinderella starring Brandy, Whitney Houston, and Whoopi Goldberg.

While the plot isn’t exactly the same, the costumes capture a similar air of elegance, royalty, and refinement. And it’s thanks to Ellen Mirojnick, who happened to design the looks for both projects.

Mirojnick, whose other credits include Fatal Attraction, Basic Instinct, and A Perfect Murder (talk about range), tells Bustle the show and movie’s “striking similarities” carry no underlying messaging but are “purely a happy coincidence and a testament to my aesthetic spirit.”

It’s an aesthetic fans love as they recreate the pouf sleeves and ornate headpieces in Bridgerton for their own wardrobes, much like Cinderella fans did with Brandy’s gown for their ’90s prom dresses.

Notable is Mirojnick’s use of color in both projects. She sticks to a specific palette, one that carries loads of subliminal messaging. Mirojnick previously told Bustle that in Bridgerton, for example, she used the color of Penelope Featherington and Eloise Bridgerton’s outfits to show the “contradiction between the two families.”

She kept Eloise’s look softer in color and Penelope’s more bold to reflect their personalities, and to speak to the difference in their families’ approach to finding suitors. “Color is my passion,” says Mirojnick. “When a project presents the opportunity to tap into that passion, I dive in headfirst.”

Scroll on to see the similarities in design and hidden messaging between the two Mirojnick-styled productions.

“Cinderella must always wear blue, whereas in Bridgerton, Daphne was written as wearing blue,” says Mirojnick. “It became ‘her’ color.”

Though they embraced the hue for different reasons, the symbolism is similar for both characters. “Blue is an idealistic color — it enhances self-expression and inspires higher ideals,” Mirojnick says. “A fitting way to present these two iconic heroines was an unforgettable, romantic hue of blue.”

When costume designing for the royal matriarchs of both projects, Mirojnick chose gold brocade, ornate necklaces, gold bracelets, and rich colors. “Jewel tones are a must when designing for royalty,” she said. As the colors are inspired by precious gemstones, it’s no surprise that they symbolize social status, wealth, and yes, royalty.

She also tends to choose purple and blue colors for royals, dressing Queen Charlotte in Bridgerton and Queen Constantina and King Maximillian in Cinderella in varying shades of the two hues.

Purple signifies nobility, power, and luxury so it’s a fitting choice for royal characters. Blue, however, speaks more to their personalities than their social status. It is said to represent wisdom — evidenced by Queen Charlotte’s choice to (spoiler) let Simon and Daphne wed. It also signifies a sense of understanding, which Queen Constantina offers Cinderella as her story unfolds.

Mirojnick tends to gravitate toward bright and bold color for villainous or minor characters. It creates a stark contrast from the main characters, like Daphne Bridgerton and Cinderella, who are conversely dressed in muted hues.

With Bridgerton, the Featheringtons wore vibrant and rich colors like bright orange, yellow, and purple, sometimes all mixed together. Previously, Mirojnick said that the Featherington family’s affinity for “acid colors” fits with their bold, “audacious” personalities. Likewise, the stepsisters in Cinderella were dressed in everything from fuschia to purple to teal, and their personalities are similarly aggressive and in-your-face.

Not only did Mirojnick choose those color palettes purposely, she went so far as to select purple based on the actress’ hair. “The color of purple has a personality all its own and it comes to life when using it to complement a woman with red hair,” she says.

Through muted tones, delicate embellishments, and whimsical fabrics like tulle and chiffon, Mirojnick dresses her main characters to appear soft and romantic.

Embellishments, in particular, add a timeless sense of charm and allure. “The crystal accents complement the necklines of both Cinderella and Daphne’s ballgowns, lighting up both their faces,” she says. “I love the twinkling light of crystals. I use them whenever I can — whether 1997 or 2019, period or fantasy, crystals never go out of style.”