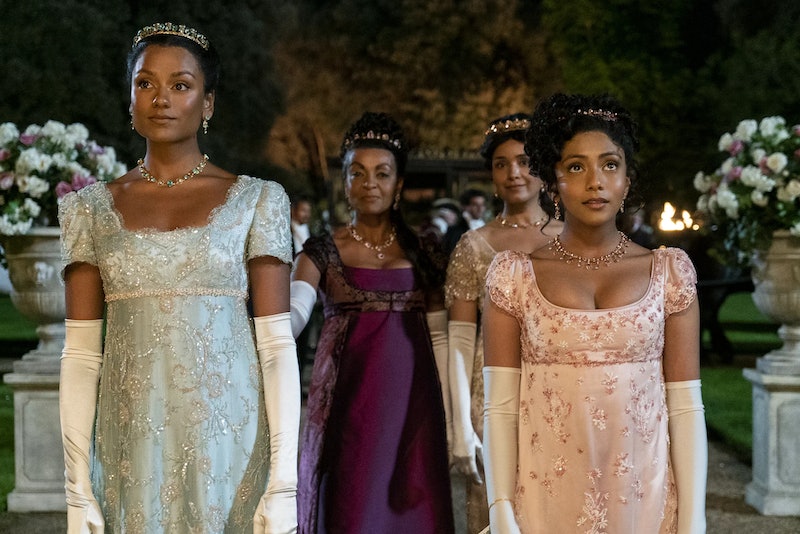 Thanks to Bridgerton season two dominating Netflix screens worldwide, TikTok is embracing #Regencycore in all its glory. However, those looking to emulate the style from the hit period drama may want to do a little research first. It turns out the Bridgerton actresses have had to forgo any form of comfort in order to rock their divine on-screen ensembles.

Fans might think Lady Danbury’s immaculate posture is simply down to her fierce nature, however, actor Adjoa Andoh has revealed that it is also partly due to the famously restrictive item of clothing. “You talk about the highs and lows of doing Bridgerton — the corsets, which ran from breasts to hips, are both,” Andoh told the The Telegraph. “Never loosen it while you’re having lunch. Some of the other actors did and they’re agony to lace up again afterwards”.

The 59-year-old added that the show’s costumes gave her a much better “sense” of what it felt like to be a woman during the 19th-century. “Not to be married was terrifying — unless you were rich. That’s why they were such peacocks,” she quipped.

Highlighting the dangers associated with wearing corsets, Andoh remarked: “We’re appalled by the foot-binding and oppressive customs of other cultures, but hello, lacing into a corset? Women’s organs shifted. And women wore them when they were pregnant.”

“Youth and appearance were currency even more than they are today. If corsets gave you more of that, then, of course you wore one”.

Thankfully, it isn’t necessary to wear a corset if you are hoping to recreate the show’s famous looks, despite the current spike in corset sales.

Simple design details like seams and fabric can give off that corset look, without being suffocating. In fact, many fans are clamouring to find new ways to create the shelf-like top cleavage that's now been named, Bridgerton Boob. So unleash your inner Madame Delacroix, and live your best #Regencycore lives.