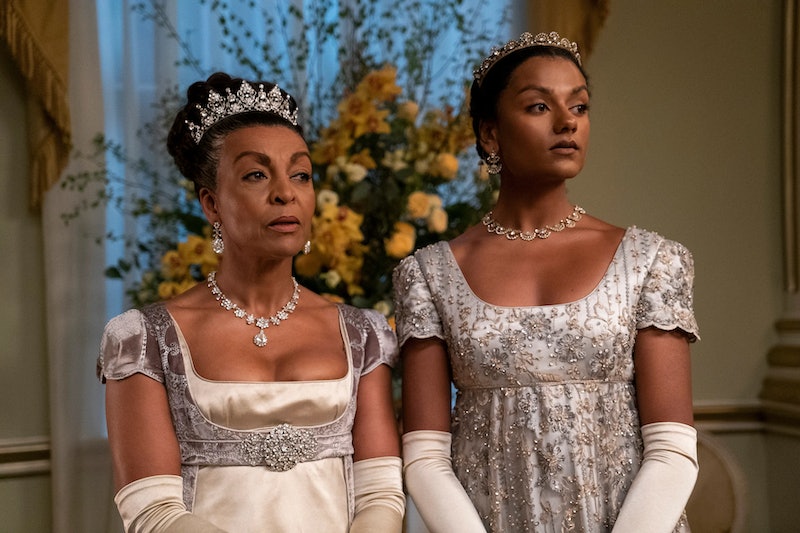 I’ve had a love-hate relationship with my cleavage for as long as I can remember. As a curvy woman with a 34G chest, it’s been burned into my brain that showing skin directly correlates with trying to be sexy. Because this negative connotation was formed by way of a judgmental society’s standard, I was stunned when Bridgerton, a show about the high society of 19th-century London, featured ample amounts of cleavage — directly working to unravel the preconceived notions I’ve held all my life.

There isn’t a day I get dressed that I don’t pause to consider how my boobs will factor into my ensemble. Do I need to wear a certain bra? Or constrict myself with boob tape? Will my cleavage become the focal point of my outfit? Am I at risk of an accidental nip slip on my morning commute or, worse, a meeting with my boss? My curves transform a look in the same way a statement accessory or polished jacket might — except, unlike the other elements of my wardrobe, I can’t take my boobs off when they don’t go with my outfit.

It wasn’t until I started streaming Netflix’s Regency-era period drama that I realized the War on Cleavage hasn’t always existed. Like 82 million other households, I marathon-watched Bridgerton last year and waited patiently for Season 2’s release. Just last week, I fell in love with the Sharma sisters after watching all 10 new episodes far too fast.

But more exciting than the new storyline was the wardrobe and the ways in which it continued to normalize and embrace cleavage — a very specific kind of cleavage at that. Emphasized by dresses with column skirts and low-swooping necklines, the half corsets beneath each character’s ensemble hoisted their bosoms directly into the spotlight, creating a shelf-like top cleavage I’m calling Bridgerton Boob.

Every female character in the hit show sports the amplified style, from young women like Edwina Sharma and Penelope Featherington to respected matriarchs like Lady Danbury and Dowager Countess Violet Bridgerton.

Of course, the costuming isn’t entirely historically accurate — it’s far more likely that high society women would have reserved such revealing necklines only for nighttime affairs. But in making Bridgerton Boob the series standard, the show’s costume designer Ellen Mirojnick has managed to suck the scandal right out of it. As Netflix’s most-watched series ever, this choice is a bold move that will hopefully help to further normalize exposed breasts and undo the effects of decades worth of societal cleavage-shaming.

Don’t get me wrong, the Bridgerton cast is still sexy (even with far fewer sex scenes than in Season 1), but the characters’ cleavage-heavy ensembles don’t feel oversexualized. These women are simply existing with breasts in tow.

Though the Bridgerton Boob look changes drastically based on each character’s cup size, no chest is ridiculed as too big, too small, too much, or too little. No one is too old to show their chest and no one is chastised for “trying too hard.” It’s a concept I wish lived beyond the realms of a streaming platform.

With warm weather on the horizon, skimpier silhouettes and low-cut necklines will start to gain their annual traction. I predict that Bridgerton Boob will begin to rival looks like sideboob, underboob, and center cleavage.

According to global shopping and payments service Klarna, the proof is in the purchases. Corset sales have increased by 22% from July 2021 (when Bridgerton first debuted) to January 2022, with babydoll dress sales increasing a whopping 109%. Now that Season 2 is out, fans are stocking up, with purchases for corsets up 407% in the past two months alone.

Anyone with their finger on the sartorial pulse could’ve seen this rise in shapewear popularity coming, but trend forecaster Kendall Becker agrees that the Bridgerton Boob aesthetic is part of the appeal. “As we emerge into this new era of dressing in the ‘post-pandemic’ world, there’s emphasis on embracing the feminine form — and this goes far beyond just the idealized (thin) model body type or dressing hyper-sexualized,” Becker said. “Instead, we’re finding new ways to embrace the curvature of a woman’s body.”

“When an item transcends across occasions and makes a wearer feel both empowered and able to embrace a feminine softness, it’s a guaranteed formula for success,” she continued. “Plus, it causes society as a whole to rethink what we deem as ‘appropriate.’”

Does this mean Regency-era cosplay is the key to unraveling the negative stereotypes often tied to large chests and visible cleavage? Decidedly not, but the season’s most popular television series desexualizing boobs certainly makes me feel more comfortable embracing my own.

With this in mind, I’ve begun making a dedicated effort to appreciate my chest. Though, I love a skimpy ’fit every now and again, I’ve learned that cleavage doesn’t need to be considered “sexy.” And while I don’t see myself sporting ball-worthy gowns this spring, I will be embracing Bridgerton Boob — showing my décolletage, for the first time, without shame.