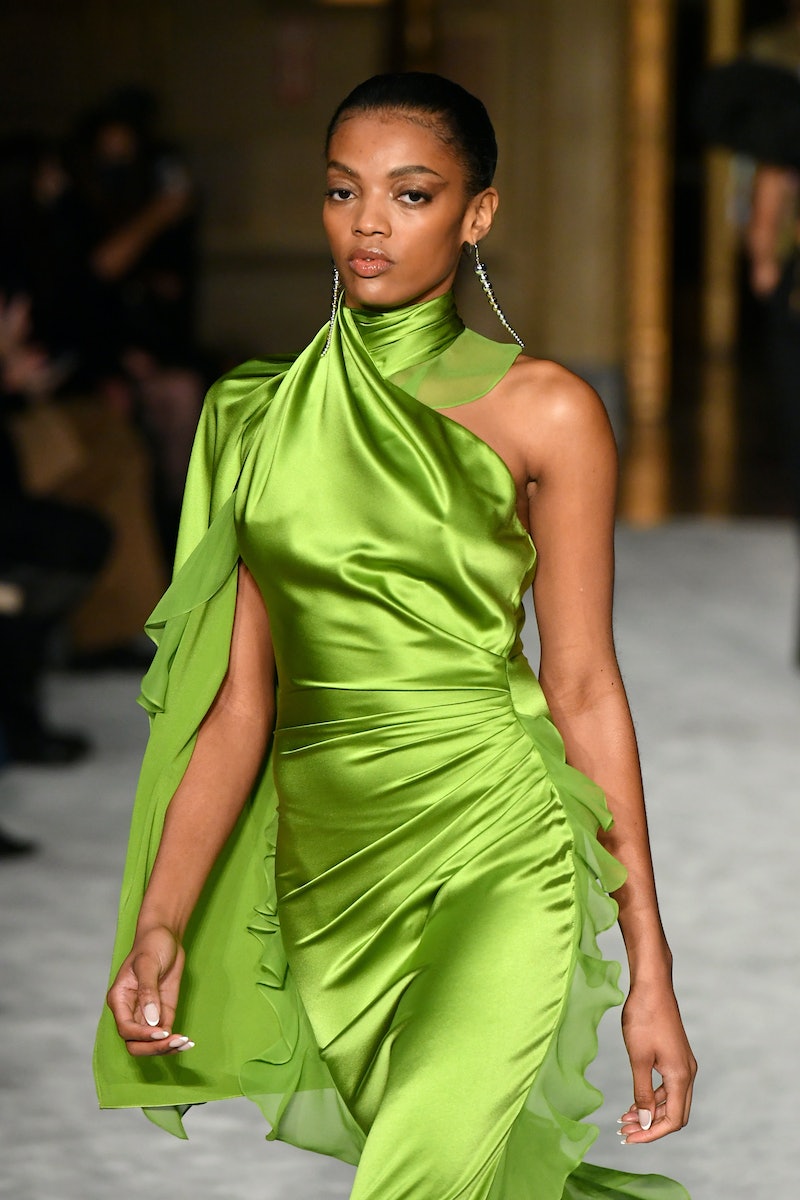 Christian Siriano is predicting a parade of conversation-starting looks on red carpets this awards season.

“It’s going to be wild,” Siriano tells Bustle about Grammys fashion, before dressing Megan Thee Stallion in a sheer ruffled gown for an after party. Yes, there were after parties. “People are really so bored. They’re like, ‘We have to do something.’”

And judging by his Fall 2021 ready-to-wear collection, Siriano is ready to empower people to get reacquainted with glamour. From a floor-sweeping bright green gown to a python-print skirt set with a matching mask, there was no shortage of sartorial eye candy.

The 35-year-old designer wants us to dress up, after all, even if we feel like spending the day in bed. At his Feb. 25 runway show, which took place at Gotham Hall in New York City, Siriano expertly placed Beautyrest mattresses throughout the socially distanced crowd.

Models Teddy Quinlivan, Coco Rocha, Candice Huffine, and Martha Hunt opened the show by “waking up” wearing black undergarments before changing into outfits for the day ahead.

“I wanted people to think, ‘OK, we’re getting out of bed every morning, and how are we approaching our life?’” Siriano says. “We want to approach it in the most inspiring way. We still should get dressed. Put a dress on. Make every day your own runway. Don’t just un-approach life. That was the idea.”

He says his own bedtime ritual is “pretty easy” and involves low-key creative time to unwind after a long day.

“I definitely spend a couple hours decompressing,” Siriano says. “I like to look at furniture online. I like to design — I’ll do little sketches. I also have no TV in my bedroom. We don’t have any curtains. We like to wake up to the sun. All those things are very important.”

A recent trip to Colorado inspired him to tap into a more dream-like state for his latest collection, awash in sun-drenched colors like bright pinks and pops of orange. The textures ranged from silky evening dresses to sweeping chiffon gowns.

“As we were up there in the mountains, you’re kind of feeling like you’re in a psychedelic reality,” he says. “Up there with the altitude, you feel like you’re in a different world. The snow is everywhere, so my idea was, ‘OK, what if people up here in the mountains got dressed and went to a glamorous party, but it was like in a cave or something?’ That was the idea — very abstract and very full of imagination.”

After a year spent mostly indoors, Siriano wanted to stretch the limitations of what getting dressed up could look like in a post-pandemic world. Turning to nature — an easy place to find expansiveness and openness — helped him do just that.

“If you have ever watched a sunset overlooking the mountains, it’s the most unbelievable thing you can see,” he says. “Tapping back into letting nature inspire us was really important. Because we have to remember, that’s the one thing that is still there. Even if we are all stuck where we’re stuck, you can still go outside — and that can be a beautiful thing.”

More like this
Kylie Jenner Joins The Bondage Trend In At Paris Fashion Week
By El Hunt
The Official New York Fashion Week February 2023 Schedule Is Here
By Dominique Norman
Twitter Memed Doja Cat's Red Schiaparelli Look & I Am Cackling
By Dominique Norman and Kelsey Stiegman
Kylie Jenner Wore A Stunning Corset Dress For Paris Couture Week
By Dominique Norman
Get Even More From Bustle — Sign Up For The Newsletter
From hair trends to relationship advice, our daily newsletter has everything you need to sound like a person who’s on TikTok, even if you aren’t.