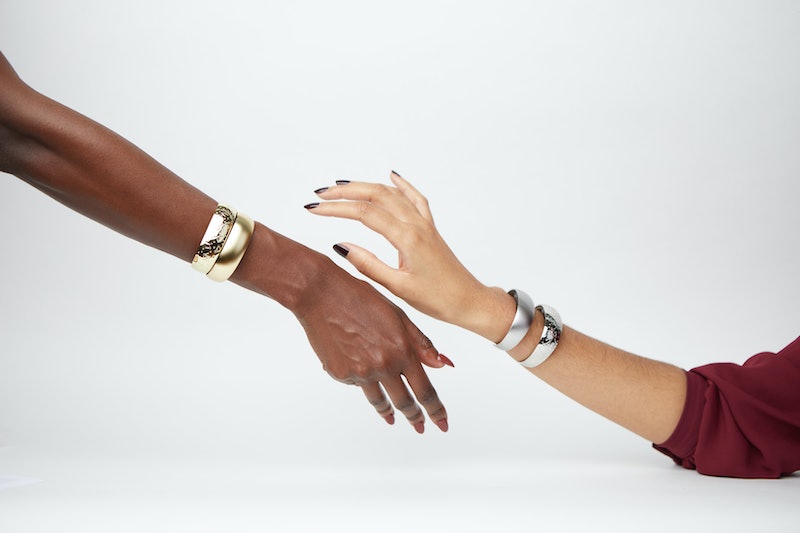 Both survivors of sexual assault, Quinn Fitzgerald and Sara de Zarraga aimed to help people protect themselves in dangerous situations.

That’s how they came up with the idea of Flare, a line of easy-to-use, discreet safety bracelets that can help save lives.

If you’re in an uncomfortable or potentially dangerous situation, you can initiate one of two actions: Holding down a small button on the bracelet to send your GPS location to a pre-populated network of friends, or pressing the button once to trigger a fake call to your phone so you have a reason to leave. You can also include an alert to 911 with your location (this feature is free and optional, and can be turned off or on anytime).

“It was actually designed to be jewelry first and hide the technology inside of it so that it wouldn’t blow up your spot because it was so discreet,” de Zarraga, 34, says. “And because blowing up your spot can really endanger you even more.”

Currently, Flare offers eight bracelet styles in an assortment of color ways. The brand initially launched in February 2020, five years after the duo met as students at Harvard Business School. Today, the bracelets are in high demand, available in both sleek metallic finishes and casual beaded options.

For the technology, the founders kept in mind that no two safety situations are the same. “We wanted to give people lots of options through our technology to act in any level of situation,” de Zarraga says. “Whether it’s getting away from unwanted attention that’s making you feel uncomfortable, or calling for backup or calling for emergency services in a true emergency. Because then you would have solutions on all ends of that spectrum.”

The co-founders envision their brand evolving beyond the label of a jewelry company. They recently launched gender-neutral designs that anyone can feel comfortable wearing, regardless of the situation.

“Knowing what we do about sexual assault affecting the LGBTQ+ community in really disproportionate ways, it’s important that we reach people across the whole gender spectrum, and that we make designs that reach out and speak to those people,” de Zarraga says. “Our long-term goal is to create lines of other wearables that you have on your person, not just jewelry.”

In November 2020, Time Magazine named Flare one of its best inventions of the year, signaling the staying power of wearable technology, and the ever-growing role it’ll play in the marketplace.

“We were ecstatic,” Fitzgerald says. “We wanted to create something that was actually useful. Having that accolade speaks to that, but you know what, it’s about damn time — not for ourselves, but for this issue. I don’t know a single woman who doesn't think about her safety every single day.”