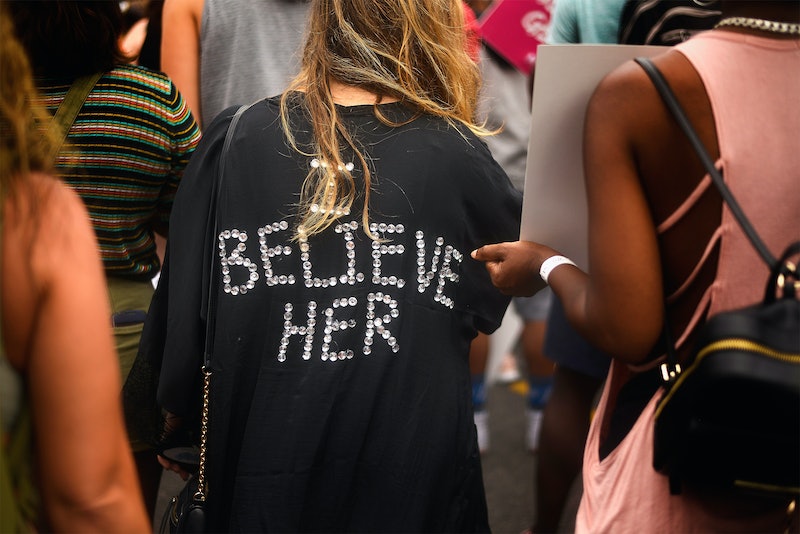 In recent years, the national dialogue on sexual assault has deepened and expanded. This includes widespread support for the #MeToo Movement, increased legislative efforts to hold perpetrators criminally accountable for their actions, and more. But while many people are glad that powerful men are finally being held accountable, it's important to remember that the work is far from over, and that there are still many meaningful ways to support sexual assault survivors.

Though it's always helpful to support causes on social media, it's especially crucial that people also take the activism offline and get involved in their communities to help put an end to sexual violence. Data from the National Sexual Violence Resource Center (NSVRC) shows that one in five women will be raped in her lifetime, and according to the Rape, Abuse and Incest National Network (RAINN), an American is sexually assaulted every 73 seconds. Considering sexual assault is the most underreported crime, NSVRC points out, those numbers could be even higher.

Whether it means donating to a local woman's shelter, making sure that movements like #MeToo andTimes Up don't fizzle out, or by ensuring that survivors feel they are being heard when they decide to come forward, there are plenty of ways you can help survivors right now.

This sounds like a no-brainer but simply listening to and supporting a sexual assault victim, affirming that you believe them when they come forward, and paying attention to the language that you use makes a world of difference. RAINN suggests using phrases including "I'm sorry," "This is not your fault," and "You are not alone" when it comes to responding to a survivor of assault.

Victims may feel ashamed when they come forward with their stories and it's important that they feel heard. The best thing you can do is believe them and make sure they know that you support them.

Open A Dialogue With Friends And Family About The Issue

If your parent, sibling, friend, or some other person in your life reacts in an unsupportive way toward a sexual assault survivor, or doesn't seem to understand the issue, try to open a dialogue with them instead of ignoring them or immediately getting angry with them. Consider asking this person questions that show you're genuinely confused by their reaction, like "Why do you think that?," or "Have you considered [supportive perspective for survivors]?"

It can be hard to talk to someone who is rude or otherwise disrespectful of sexual assault survivors. Of course, it's not on you to change every single person's mind — but if it's a good friend or family member, they might benefit from a thoughtful conversation that encourages them to see the whole situation in a clearer light.

Donate To Women's Shelters And Organizations

Women's shelters serve as safe housing for women who are trying to escape abusive partners. About 20 people are physically abused by an intimate partner in the United States every minute, according to the National Coalition Against Domestic Violence (NCADV). You can easily donate to local shelters in your area using Domestic Shelter's online database, which also lets you contribute to women's wish lists of items and resources they need.

Fundraise For RAINN And Similar Groups

RAINN operates a sexual assault hotline in order to support survivors and relies on volunteers to keep the hotline running 24/7. People who can dedicate at least 12 hours a month can apply for the program online and work remotely.

Even if you don't have the time to volunteer, RAINN also asks people to fundraise on behalf of the organization. You can pledge your birthday to RAINN by asking friends and family to make donations to the organization instead of buying you presents.

There are several other organizations that are currently accepting donations in order to combat sexual violence. The nonprofit 1 in 6 supports men healing from sexual abuse, while the National Alliance to End Sexual Violence educates policymakers about legislation that could end sexual abuse and assault.

Bring A Call To Men To Your Community

Another way to fight sexual violence is to address issues of toxic masculinity and sexual consent head-on. A Call to Men is a violence prevention organization that educates men around the world and helps to prevent sexual assault and violence against women. It's trained everyone from NBA players to the U.S. military.

Remember That Sexual Abuse Affects All Genders And Sexual Orientations

In addition to encouraging men to be allies of the #MeToo movement, it's also essential to remember that these movements aren't just for one type of person. According to the CDC’s National Intimate Partner and Sexual Violence Survey, 44% of lesbian women and 61% of bisexual women experience rape, physical violence, and/or stalking by an intimate partner, compared to 35% of heterosexual women. Meanwhile, the U.S. Transgender Survey from 2015 estimates that 47% of transgender people have been sexually assaulted in their lifetime. You can find more information about the LGBTQ community and sexual abuse on the Human Rights Campaign's website.

It's crucial to listen to, believe, and support anyone who speaks out about an incident of sexual assault or harassment, regardless of their gender or sexual orientation.

Support Marginalized Communities That Are At High Risk Of Sexual Assault

According to the National Organization for Women, sexual violence disproportionately impacts immigrant women, disabled women, women of color, and LGBTQ people. In the 2015 U.S. Transgender Survey, for example, 53% of black respondents said they'd been sexually assaulted at least once in their lifetime, while 13% said they had been sexually assaulted in the past year. And according to data from the National Congress of American Indians, 56% of American Indian and Alaska Native women have experienced sexual violence at some point and are 1.7 times more likely than white women to have been abused in the past year. Ultimately, these statistics only scratch the surface.

You can support some of these communities by donating to and advocating on behalf of the organizations that directly address their needs. These include Trans Lifeline, the Coalition to Stop Violence Against Native Women, A Long Walk Home, and Immigrant Women Too, among many others.

Make Sure #MeToo Doesn't Fizzle Out

While the watershed #MeToo movement in 2017 resulted in many, many more survivors coming forward with their stories and shedding light on the widespread nature of assault in the workplace and beyond, it's important that #MeToo doesn't remain just an "online" movement.

You can continue the momentum of #MeToo by discussing issues of sexual misconduct with friends and loved ones, being an active bystander, and calling out inappropriate behavior should you witness it in your own workplace.

Donate money to causes that prevent or aim to end sexual violence, including the National Sexual Violence Resource Center and the Vision of Hope Gala, which fundraises to prevent child sexual abuse. If you need more ideas, you can check out this list of organizations fighting sexual violence.

You can shop for a phone or phone accessories while supporting NCADV at the same time. When you shop from Priority Wireless' website, for example, 10 % of everything you spend will go to NCADV and help combat violence against women. You can also donate directly to the NCADV online.

Amazon also allows shoppers to donate a small portion of purchases to a charity of their choice by visiting smile.amazon.com.

Survivors of domestic violence and sexual assault need ways to call the police and ask for help, especially in the case when a partner is violent. Low-income survivors may not be able to afford a cellphone or have had theirs disconnected. You can donate a cellphone by disconnecting the phone service, erasing the data, removing the SIM card, and dropping it off in a HopeLine bin at any nearby Verizon store. Visit HopeLine's website for more information on how to help.

Like the AIDS red ribbon or Breast Cancer awareness pink ribbon, the "No More" pin shows your solidarity with victims and is a symbol that supports ending domestic violence and sexual assault. It's also a way to spark dialogue about sexual misconduct and a visible way to show your support for victims. Visit the No More website to learn about and shop their merchandise.

Contact local representatives and make sure they know that citizens want legislation that will provide support to survivors, improve the criminal justice system, and help prevent further violence. RAINN Action Center has pre-written letters and tweets that you can send to Congress members about sexual assault prevention and support.

Increase Awareness In Your Community

Overall, you can support sexual assault survivors by continuing to use social media to raise awareness about sexual assault in your network. Additionally, you can reach out to your local community to assist in prevention, participate in youth programs that educate teenagers about consent and violence prevention, and engage with your college community to improve safety on campus.

While there's no denying that the last decade was filled with landmark milestones for sexual assault survivors everywhere, there's still plenty of work to be done in the next decade and even beyond, especially when it comes to helping survivors and tackling the underlying issues that perpetuate assault and abuse.

Caroline Burke contributed to this article.

This article was originally published on Dec. 30, 2017