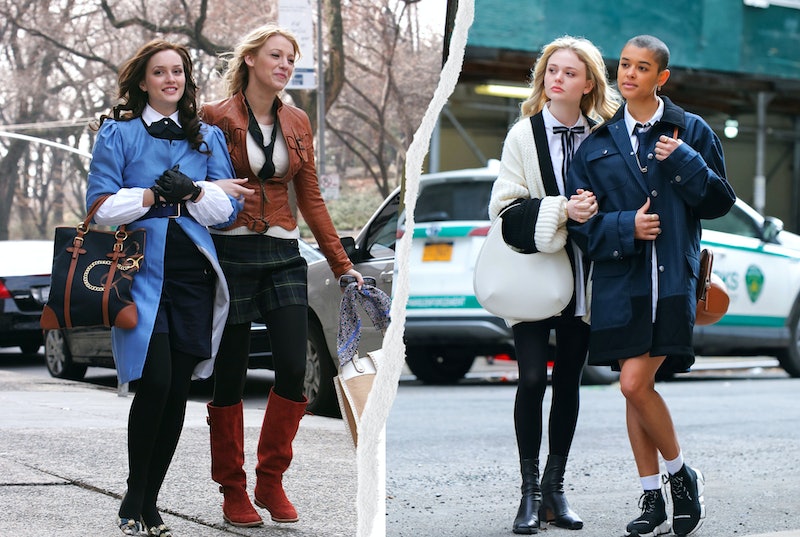 When Gossip Girl first premiered in 2007, the iPhone and Twitter had just debuted, Instagram was still five years away, and TikTok was barely a pipe dream. Sustainability wasn’t a major part of the sartorial lexicon, and ‘90s trends were being rejected in favor of naughties maximalism. Since then, the world of social media and fashion has completely changed, and so too has the Gossip Girl wardrobe. Costume Designer Eric Daman, who worked on both iterations, acknowledges that his approach to the series fashion has changed with the times.

For one, vintage shopping was frowned upon by the characters in the original series, which Daman calls “O.G.G.G.” “I didn’t do any vintage on the original,” he tells Bustle. “Sustainability is much more embraced now. It’s really important to this generation and also to me to have a [responsible] fashion footprint moving forward.”

Likewise, the over-the-top 2000s aesthetic has been replaced by a return to ‘90s restraint. “We’re going into this more minimalist world,” says Daman, whose previous credits include Sex and The City. “It’s not the crayon-colored tights and bright boots. It’s a very pared down almost monochromatic palette [today].”

Ahead, Daman speaks to Bustle about the evolution of Gossip Girl costume design, from the impact of social media to the introduction of thrifting.

The Return Of ‘90s Minimalism

“I feel like there was a maximalism that I brought from Sex and the City into Gossip Girl — O.G.G.G. — and I’ve left that behind in the evolution of who these characters are and how they’re dressing,” he says. “It’s not the crayon-colored tights and bright boots. It’s a very pared down almost monochromatic palette [today].”

The Dawn Of Social Media

Social media has completely transformed the way fans experience the Gossip Girl wardrobe. While filming the reboot, Daman was shocked at how little time it took for people to identify an item from on-set paparazzi photos and share it on their Instagram, TikTok, or Twitter accounts. “Jordan [Alexander] would step out of her trailer and within 15 minutes, [it’d be on social media]. Who is ID-ing these clothes? Like I don’t even remember which shoes she’s wearing,” he says.

He even started to use the social media response to gauge which items were a hit among fans. “It’s a great litmus test to see how people are reacting to certain things,” says Daman, adding: “If I want a certain bag to be showcased or we want an earring or garment to be showcased, I knew I need to get it into a scene where they’re outside.”

It also worked wonders in helping them secure designers for the reboot. In the original, he says, “we had to wait like two weeks or three weeks for the paparazzi to shoot Blake [Lively] carrying a Ferragamo bag for [brands] to get some sort of credit. Now, I think [brands] see the turnaround of it and they see [that] the popularity and influence of the kids has soared.”

Sustainability Is Now A Priority

Sustainability was not a major part of the sartorial lexicon when Gossip Girl first aired in 2007. All that’s changed now as Gen-Z is famously invested in eco-friendly fashion by way of upcycling or shopping vintage.

“I didn’t do any vintage on the original,” says Daman. “People had a side-eye opinion and looked down their noses. Maybe Jenny Humphrey would thrift — but not even. I think there was a definite judgy-ness around it.”

Today, however, “it’s much more embraced.” He adds: “it’s really important to this generation and also to me to have a [responsible] fashion footprint moving forward.”

Vintage shopping also appeals to Gen Z’s desire to have one-of-a-kind pieces in their wardrobes. “You can buy a great piece and you’re the only one that has it, so there’s a uniqueness to it which also speaks to this generation. They don’t want the fast fashion and the thing off the rack that everyone else has.”

It’s Not All About Designer Labels

Daman says that shoppers today aren’t quite as label-focused as they used to be. “I don’t feel like [people] are as designer-centric these days,” he says. “Harkening back to Pat [Fields] and [being] an early adopter of thinking outside the box, I don’t think that this generation likes to be boxed in.”

Indeed the Gossip Girl reboot characters are mixing and layering pieces from different designers, and curating a more unique wardrobe. “It’s not like Julien Calloway is a Marc Jacobs girl,” Daman adds. “The world is open to her.”

“This generation loves the idea of comfort and doesn’t want to give that up to look amazing,” says Daman. So, he was sure to incorporate an activewear-inspired, oversized ‘90s vibe in both their off-duty wears and their uniforms.

“School uniforms are such an iconic visual from the original Gossip Girl and it’s something that definitely parlayed between the two, but I think that [with] the new uniforms, I really colored outside the boxes,” he says. “We ended up designing all of this varsity gear with all of these logos and the heritage vibe.”

What materialized were shorts and bomber jackets that brought a retro flair to the Gossip Girl uniform. It’s decidedly more comfortable and sporty than anything you’d see on Waldorf or Van Der Woodsen over a decade ago.