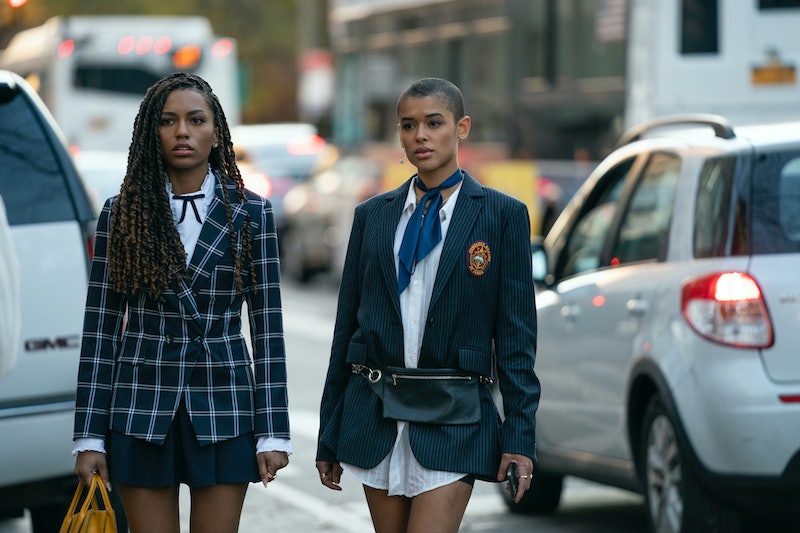 Much like in the original Gossip Girl, the fashion is a central character in the HBO Max reboot, which premiered on Thursday, Jul. 8, and includes 10 hour-long episodes. Costume Director Eric Daman, who worked on the original series, once again used the wardrobe as an accompaniment and sometimes even an accelerator to the plot.

Daman is adored for his work on the first Gossip Girl iteration (which he lovingly refers to as “OGGG”), inspiring countless purchases, hoards of dedicated fashion accounts, and turning Blair Waldorf and Serena van der Woodsen into veritable fashion icons.

The reboot promises to be just as impactful when it comes to style. Already, Julien Calloway (Jordan Alexander) is proving to be a fan favorite, wearing pieces like a Christopher John Rogers mixed-print gown and a sheer Laquan Smith bodysuit.

“Julien Calloway has definitely been tagged as an influencer,” Daman tells Bustle. “To me, I looked to supermodels and international celebrity more so than just your everyday Hadid’s, if you will. So, think of an international supermodel that is cosmopolitan and has access to Cannes and goes to the couture shows and has a bigger view of the world which is also infused with the music world from her dad.”

Daman also takes a sartorial risk with Calloway’s uniform, having the Upper East sider and her crew show “up to the first day of school not wearing pants,” says Daman. “It’s now become a wildfire trend.”

While Calloway is a frontrunner for Gossip Girl style icon 2.0, the other characters’ wardrobes are just as significant to the plot. Daman uses subtle details to reveal their personalities, like Zoya Lott’s book totes from Black-owned bookstores. “Zoya is an activist, and she has sociopolitical awareness, so it is really essential to infuse her wardrobe with more thrift and BIPOC-owned apparel,” he says.

Her tote collection is one of many “easter eggs” he integrated throughout the series, including a nod to Clueless with Monet’s suit skirts and a re-interpretation of one of the outfits from the original Gossip Girl pilot.

Ahead, Daman speaks to Bustle about his costume design process, his varied sources of inspiration, and the meaning behind each character’s personal style.

“School uniforms are such an iconic visual from the original Gossip Girl and it’s something that definitely parlayed between the two. [With] the new uniforms, I really colored outside the boxes where we ended up designing all of this varsity gear with all of these logos and the heritage vibe that we didn’t do with the original at all.

And also playing with that in a way that is oversized and feels athleisure-inspired. This generation loves the idea of comfort and doesn’t want to give that up to look amazing. So, it’s kind of this hybrid of fabulous clothing that also has an athleisure vibe but also that translates into these school uniforms that seem to be really pleasing to people.”

“With Jordan’s character Julien, her dad’s a music producer and how does that influence how she dresses? What does she have around the house? And what did she grow up with the she wants to try to emulate? What does that mean for contemporary design and how would Julien Calloway emulate that? And then it winds up being that amazing LaQuan Smith look.”

“Zoya is an activist, and she has sociopolitical awareness, so it is really essential to infuse her wardrobe with more thrift and BIPOC-owned apparel. She carries a lot of book totes that are Black-owned bookstores.

It’s really awesome to be able to speak to those and to hide those awareness elements as Easter eggs in the show because I think it’s part of the current dialogue and I know I have a platform to be able to increase awareness.”

“Monet is like Blair Waldorf meets Dionne from Clueless. She’s the epic mean girl, in a way, and I think she and Luna’s characters kind of harken back to the old OGGG in a way, but in a way that feels very contemporary in how it’s put together.”

“I wanted Tavi in that [first] moment to show off and kind of emulate that Blake was everything. Serena was the “it” girl. I love that there’s a connection between that [first OG scene] and that [first reboot scene] visually, for the fans, that legacy to connect in a symbiotic way but also that it’s a little bit one step behind that she’s dressing like Serena, in a way, versus dressing like Julien Calloway.”

“[A fashion risk we were able to take this season] was Jordan and her crew showing up to the first day of school not wearing pants. I didn’t know that we were going to get there even when we were first getting into this.

In early days, I was having conversations with Josh and Stephanie like, ‘Maybe we update the school uniforms with the girls wearing pants instead of skirts. Maybe that’s it.’ And then I went from pants being the hip, modern movement to being like, ‘how about we put them in these tiny shorts.”

It also came from when I saw a gaggle of girls coming out of a private school down in the East Village and they were all in these giant sweatshirts and these little biker shorts and I was like, ‘oh that’s an incredible, real look. Let’s see how we can integrate that into the show.’ And it’s now become a wildfire trend. On the street, and then on the show, and then probably moving across the rest of the world as we speak — into France and then into Spain.”