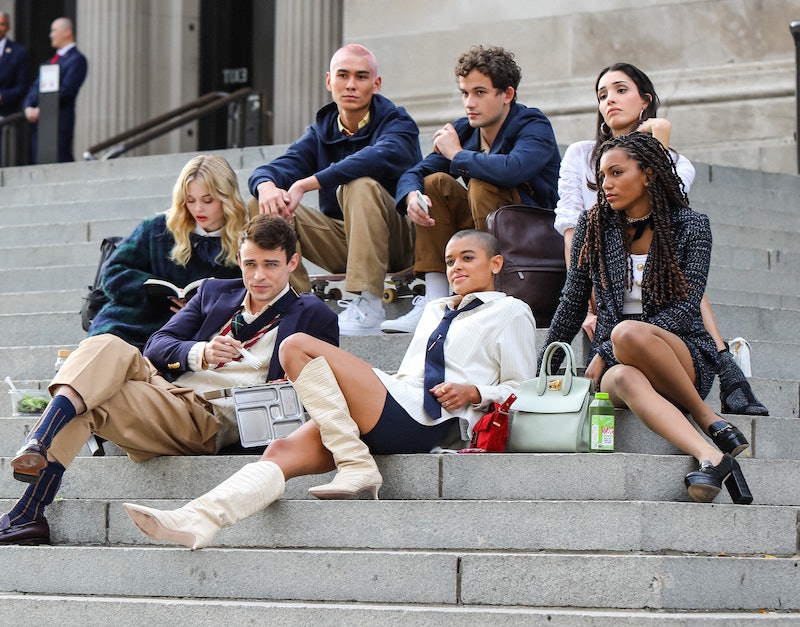 Teased nearly a year ago, the Gossip Girl reboot on HBO Max has officially started filming. Spotted in some iconic NYC locations, including the steps of the Metropolitan Museum of Art, the cluster of actors are styled to perfection by costume design legend Eric Daman.

Clad in everything from preppy school uniforms (with Schutz boots) to evening gowns (Christopher John Rogers, of course), the cast of characters might have changed from the original 2007 series, but the wardrobe remains largely the same. That is to say, it's as stylish as it gets.

The world has only been able to catch a glimpse of some of the outdoor filming wardrobe choices via paparazzi photos, but there are sure to be many more outfits for viewers and fans to swoon over for years to come. After all, Serena Van Der Woodsen and Blair Waldorf outfits are still being copied today. And the official Gossip Girl trailer was released to give you a little bit more of a window into each character’s wardrobe ahead of the July 6 premiere date.

Ahead, find some of the best looks from the Gossip Girl reboot so far: scalloped blouses, uniform skirts, and chunky heeled loafers galore. And check back for updates.

Watch the trailer above and find all your favorite looks from the 2-minute teaser below.

When all the Seniors convene on the steps of the Met, you know you’re watching a scene out of Gossip Girl. The variations on the traditional school uniform are not-to-be-missed.

Lott’s uniform is preppy, yet sporty, with a little vintage appeal. She wears a pair of Adidas kicks with a crisp button-down shirt, and finishes it off with her mother’s scarf tied in her hair.

Keller is a teacher at the school and dresses the part, though she tries to impress with trendy flair. Though tailored with a pair of trousers and a silk blouse, she goes for a monochromatic look, styling it all in varying pink hues.

For what looks to be a gala, the three seniors go all out. Between the ruffles, the crinoline, and the structured bustier, they’re checking all the after-hours glam boxes.

To check out her sister in a fashion show, Lott chose a bright orange slip dress with sequins. She paired it with slip-on high-top sneakers to amp up that playful charm.

At the same event, Calloway chooses a sleek after-party look that consists of a cropped tank and patent pants.