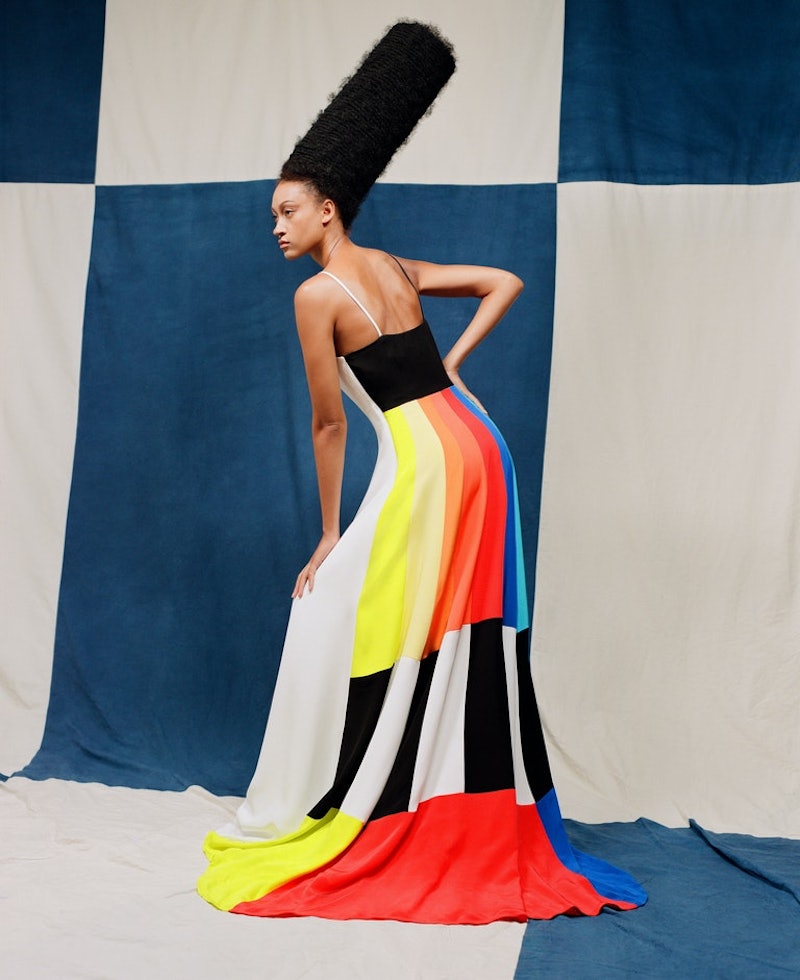 To say Christopher John Rogers is one of New York's most exciting new designers is an understatement. The SCAD-educated wunderkind, who hails from Baton Rouge, Louisiana, has already won both the CFDA/Vogue Fashion Fund prize and the Emerging Talent Award. He's dressed such luminaries as Lady Gaga and Zendaya (on the night of her historic Emmy win, no less) and his NYFW runway shows are widely considered one of the hottest tickets of the week. So, when he opted not to stage a virtual fashion show in September, anticipation for the Christopher John Rogers Spring 2021 collection grew to a fever pitch. Then, finally, on Tuesday, he debuted a look book that immediately became the highlight of an otherwise underwhelming Fashion Month.

His artful inspiration materialized in both the color palette and the playful mix of patterns. On knit dresses, he paired color blocking with his signature checkerboard print. Striped sweaters were styled boldly with floral pants, like a high-fashion version of Bert & Ernie's famous knits, as designer José Criales-Unzueta cleverly remarked on Instagram.

Undeterred by claims that his pieces aren't commercially viable enough, the designer was sure to show the breadth of Christopher John Rogers customers. Casual dressers will gravitate toward the knitwear, which can easily pair with sneakers and denim. The professional set will lean toward the sharp white suiting with bursts of color on the cuffs and belt loops.

And for the adoring fans of Christopher John Rogers evening wear, there was no shortage of memorable gowns to swoon over. A black dress with colorful stitching along the bodice felt earmarked for the red carpet. A white gown with a colorful striped train — paired with a towering Afro — will likely make an appearance in several high fashion magazine editorials.

Debuting on the last day of Fashion Month, CJR's timing couldn't be more poetic, after a disappointing run of lackluster collections in Paris and New York. At a time when uncertainty looms heavily over the fashion industry, his show is the burst of creativity the world was waiting for.