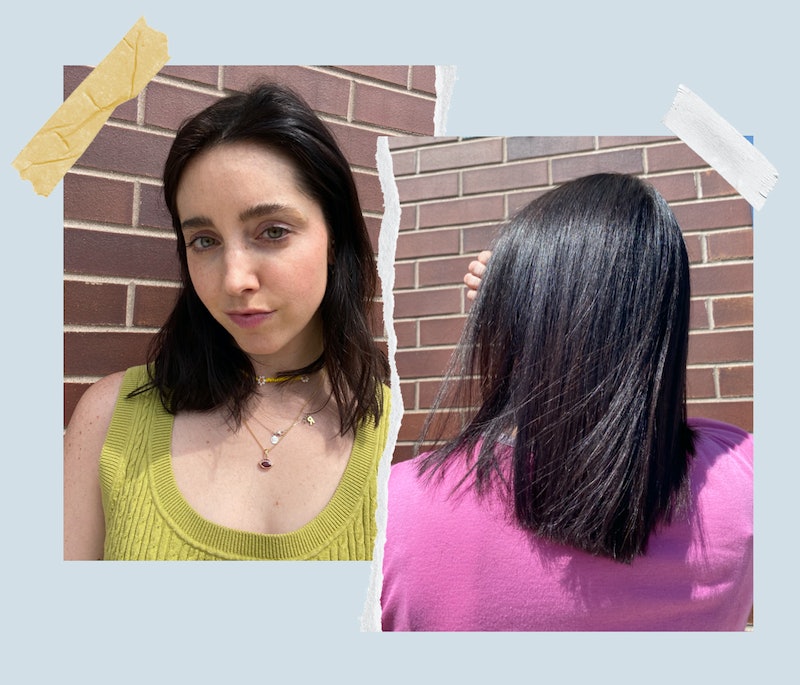 Your hair is at its peak when you’re a child. I’ve been on a long quest to find products and treatments that restore my strands to that untreated, uncolored level of health — and I’ve finally found the transformative solution of my dreams: “hair Botox.”

Despite the name, Botox for your hair doesn’t involve the toxin that paralyzes your muscles to smooth out fine lines and wrinkles as it does in the skin care world. In this context, it works as an extra-nourishing and reparative treatment that leaves your strands as close to their virgin state as possible (hence its association with the anti-aging skin toxin.) “Imagine the strongest hydrating mask that you could get — that’s what hair Botox is,” says Juliana Ohlmeyer, a New York City-based stylist and color pro. “It just deeply moisturizes and brings out the best of your hair.”

After testing it out on my color-treated, dry, damaged locks, I’ve become a true stan. Here’s everything you need to know about Botox for hair, and what my end results looked like.

What Is Botox For Hair?

Many people are familiar with hair Botox’s cousin, keratin treatments. The main difference between the two? Botox uses a slew of moisturizing ingredients, while keratin uses protein, explains Ohlmeyer. And Botox is something that’s much more universally tolerated. “It’s great for anyone who has hair that’s been compromised from color or that has lots of buildup, or anyone who has really frizzy hair,” she tells Bustle. “Not everyone’s a candidate for keratin, though, as it can be really strong and sometimes change your curl pattern. Botox doesn’t do that.”

Botox is good for all hair types and textures, says Ohlmeyer — even those who are pregnant. The formula’s packed with nourishing essentials. Though it can vary by brand and salon, it’ll definitely contain amino acids (which improve the strength of your follicles), a wide range of vitamins (including vitamin B, which brings oxygen to your scalp for healthier hair), and natural fatty acids like omega-3 (which can promote fullness). Keratin treatments, on the other hand, can sometimes have formaldehyde lurking in the formula, a chemical that has a strong smell and the potential to irritate your eyes, nose, throat, and even respiratory system when inhaled.

“Imagine the strongest hydrating mask that you could get — that’s what hair Botox is.”

The end result of each is another differentiating factor. “Keratin is for those who want to be able to wash and go, and they usually want their hair to be on the straighter side,” says Ohlmeyer. My hair’s already pretty straight and it’s a medium texture, which is why I’ve never tried keratin — it’d make my strands look more thin and lifeless. With Botox, however, it doesn’t straighten but makes your hair as virgin-like as possible. Oh, and it’s cheaper: While keratin treatments can cost up to $600, Botox ranges from $50 to $300 depending on which salon you go to.

Basically, keratin focuses on relaxing the texture, and Botox is about embracing your natural strands and “making your texture the best version of itself,” says Ohlmeyer. Since mine has a tendency to frizz — and humidity season is here in full force — I was all about this.

My Hair On Botox

My dehydrated, frizzy strands were so ready for the Botox. Ohlmeyer applied the treatment all over my head, coating each hair (avoiding the scalp) with the goopy cream — then I just had to sit and wait for it to work its magic. This can take anywhere from 20 to 45 minutes depending on your hair type and needs.

Afterward, you rinse it all out with water and condition (no shampoo) before getting it straightened (though extra-fine hair types don’t need to do this step). This seals it, says Ohlmeyer, as the heat “pushes the treatment further into each strand.” About an hour and a half later, I was peering into the mirror in awe: My hair was lustrous, silky, and smoother than it’s ever been.

I’m generally a low-maintenance kind-of-hair care gal. And, to be frank, I never use masks (on my strands, at least). So the Botox results truly wowed me. The best part? It lasts up to three months... which means I’ll reap the shiny and slick perks for a good chunk of time.

After the treatment, I survived a whopping five days until my next wash. In that entire duration, I saw zero frizz and couldn’t stop running my fingers through my hair. But, as you might imagine, I was nervous to finally shampoo — according to Ohlmeyer, though, you can do your regular washing and styling routine without wrecking its results (with an exception: Avoid sulfates, which can make it come out faster). Once my strands air-dried, I realized I had nothing to worry about. My hair still looked fabulous.

Over a week later and I’m still strutting about with smooth, frizz-free locks — even though the humidity has arrived in full blast. Looks like I’ve now got two kinds of Botox treatments to keep in my beauty calendar.