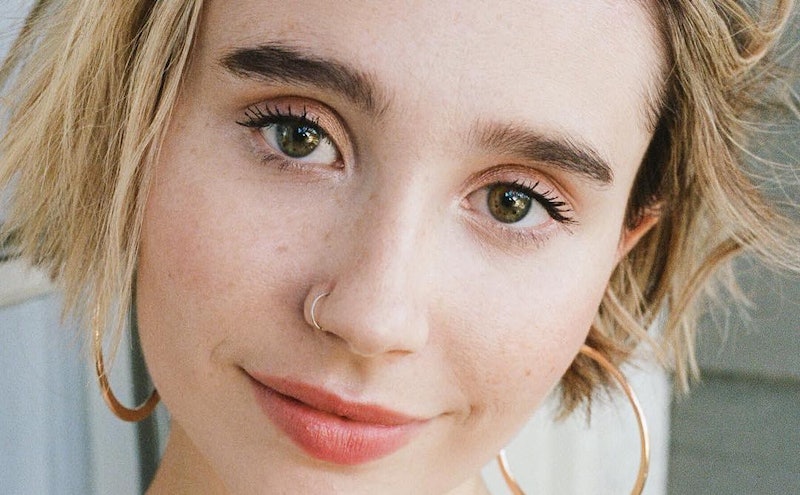 My very first preventative Botox experience all started with a ‘90s Nikon film camera. A photographer friend of mine came over to my apartment to play around with her newest toy —I agreed to “model” (aka awkwardly drape over an armchair and attempt to smize) — and when the prints came back, I was obsessed with them… except for one thing. My. Freaking. Frown lines. I consider myself a pretty happy-go-lucky person generally speaking, but at the age of 25, there they were, captured permanently on film: two faint (but noticeable) vertical fissures situated angrily between my eyebrows.

As someone who writes about beauty for a living, I’d encountered the opportunity to try Botox before. But I’d always declined. I wasn’t “the type” of person to get Botox — wrinkles weren’t to be demonized; they were signs of wisdom! But seeing my frown lines (or, “angry 11s,” as the injectables world calls them) in print made me feel like I was staring at a different person. I knew why the lines were forming: I spend all day doing what I love (writing) and unconsciously my face rests in a concentrated glower for the hours I'm at my computer every day (resting writer face?). My facial muscles were just doing their natural thing. Still, I hated the idea of having permanent angry 11s, which would make me look pissed-off and serious all the time, instead of lighthearted and cheerful, like I usually feel. I just wanted my face to reflect my vibe within. These photos were the first sign that one day, it might not.

So… a few weeks before my 26th birthday, I finally bit the bullet and dropped about $100 on my first round of preventative Botox. According to Dr. Will Kirby, a board-certified dermatologist and the Chief Medical Officer for the nation's leading aesthetic dermatology group, LaserAway, "preventative Botox" (as opposed to any other Botox) basically describes smaller, localized dosages of neuromodulators (aka, muscle-paralyzing chemicals) injected into one’s facial muscles before any “static” wrinkles (lines that are visible even when your face is relaxed) set in place. If you start paralyzing the muscles before any static lines ever form, they'll do just that: never form. Thus, these dosages are labelled preventative.

(Preventative Botox is also sometimes called “baby Botox,” so if you hear that phrase, rest easy that it’s not referring to neuromodulators for infants.)

Despite my preconceived judgments, I quickly learned there’s no “type” of person who gets Botox — and preventative treatments are becoming more common, among folks of all genders and backgrounds, every day. "Preventative Botox is quickly becoming a younger adult sport," comments Dr. Melissa Doft, a double board-certified plastic surgeon in NYC.

Personally, I have been receiving low doses of neuromodulators every four(ish) months for the last year and a half. And I’ve discovered a lot about the process along the way. If you’re curious about preventative Botox and/or considering it for yourself, but don’t know where to look for BS-free info, I hope the eight pieces of wisdom ahead will help ease your mind (and, potentially, your angry 11s).

1. The Words “Botox” & “Need” Do Not Belong In The Same Sentence

I’ve heard a lot of Botox talk (both in and outside of doctors’ offices) about who “needs it” it and who “doesn’t need it” based on the status of their wrinkles… but no dermatologist or plastic surgeon worth their salt would ever talk about Botox in terms of “necessity.”

“I think it is hugely problematic talking about people ‘needing’ Botox as it implies that we are confirming to a beauty standard that is somewhat impractical,” says plastic surgeon Dr. Deepak Dugar of the Beverly Hills Rhinoplasty Center. Dugar explains that the role of a good doctor is to protect a patient’s “mind and soul” before ever attempting a cosmetic procedure. “This concept of ethical medicine gets watered down in the cosmetic world now consumed with people getting into it for the financial benefits,” he reveals. But the second you hear a clinician toss the word “need” around, you know your mind and soul are probably not in the best hands, so it might be worth taking your business elsewhere. It's worth starting out your preventative Botox experience with an in-office consultation, so you can get a feel for how the doctor's M.O.

2. Your Results Will Seriously Vary Depending On Where You Go

Speaking of where to take your business, over the last 18 months, I have gone to multiple different places for Botox— from medispas to plastic surgeons to even a high-end dentist — and received a vast variety of results. In the beginning, I figured all Botox was equal, so you might as well just go to the cheapest place. But that is so not the reality.

“Botox and its efficacy are completely dependent on the injector’s knowledge of the anatomy, experience, technique, and most importantly artistic sense,” says Dugar. Actually, Dugar is personally responsible for the best Botox I’ve ever had, mostly because after taking a look at how my facial expressions worked, he chose to apply the product to only one area of my face, my frown muscles (the only place I had any sign of static wrinkles), as opposed to multiple areas of my forehead, which is what I’d experienced before.

Earlier in my Botox career, I had a nurse stick me about 15 times with her needle. This rendered my forehead completely motionless. That meant I couldn’t raise one eyebrow (one of my signature facial expressions) until the Botox wore off. Sure, my forehead was free of even the faintest suggestion of a wrinkle, but that wholesale immobility put my expressive quirks on pause.

That’s where the artistic sense comes in. As Dugar beautifully explains, “If Botox is used as a ‘medication’ then technically freezing the muscles is the goal. However, if Botox is used as a ‘paint,’ then it should… not detract from the beauty of the face, but instead enhance your best features.”

3. The Number of “Units” Used Is Less Important Than the Area Where They're Being Injected

Botox is priced by the unit — if you’re getting “baby Botox,” you might be looking at 5-20 units costing $10 or $15 a piece. That can add up quickly, especially because Dugar told me once that this “unit” measurement is more for your Botox professional to figure out how much to charge you than for you to know what results to expect. For example, your doctor might suggest getting 16 units to apply to the whole upper half of your face, when all you actually want is Botox for one area, which might only amount to 12 units.

So, per point #2 above, I’d suggest studying your unique face to figure out exactly which muscles you really care to inject (Is it your angry 11s like me? Or are your horizontal “surprise lines” actually the more visible ones?) and which you can skip. That way, you can have your doctor apply the Botox strategically, which will end up giving you a more natural-looking result and saving you money.

Botox is not the name of a generic drug, but is instead a product from the company Allergan. But just like Kleenex is not the only brand of tissue, there are a few other Botox-like, FDA-approved products on the U.S. market: they’re called Dysport, Xeomin, and Jeuveau. On average, these tend to be cheaper than Botox; in fact, the latter of which usually costs up to 30% less. These products “all work in a very similar manner,” promises Dr. Kirby. So if you’re on a budget, it’s worth looking into a medispa or doctor’s office that offers one of these alternatives.

5. You Can’t Lie Down Or Work Out Right After Your Treatment

This one isn’t a huge deal or anything, but I mention it only because the first time I went to get Botox — which I hadn’t told any friends or family I was doing – I didn’t know the rule about not working out for 24 hours post-treatment, and that kind of screwed with my plans. My mom and I had signed up for a Pilates class right after my appointment, and when I found out I had to cancel it, I couldn’t in good faith lie to my mother’s face. So I ended up having to endure a somewhat awkward conversation about how the reason I suddenly had to reschedule our fitness date was because I had just gotten an expensive toxin shot into my forehead for cosmetic purposes… whoops.

6. The Idea That Once You Start Getting It, You Won't Be Able To Stop... Is A Myth

Kirby says the most common Botox myth he encounters is that once you start, you have to continue or else it either won’t be worth it or your wrinkles will look actively worse than before. But experts agree this isn’t true.

“Like exercise, even working out for one week will be better for you than never working out ever. Same with low-dose Botox,” Dugar explains. Even with minimal use, you will experience a short-term benefit leftover from when the Botox was in effect and those muscles were relaxed.

How short-term are we talking here? The effects of Botox tend to work for three to four months (and they take up to two weeks post-appointment to kick in). Although Dr. Doft, says that her patients who use it for prevention usually come in just once or twice a year.

7. Most Likely, No One (Except You) Will Even Notice A Difference

At the end of the day, Botox (when done right) will not make that much of a difference in your appearance. I have the most expressive face of anyone I know (weird flex, but I’m telling you, silly faces are *my thing*) and even after that one time a nurse paralyzed my entire forehead, nobody noticed a change — not my friends, not my boyfriend, not even my mother (who would definitely say something if she did).

That being said, I personally notice a massive difference when I have Botox — those angry 11s that disturbed me so much totally disappear, my makeup goes on smoother, and overall my face looks softer.

Bottom line: Be sure to manage your expectations. All that low-dose preventative Botox does is inhibit the amount of movement in your facial muscles, which, with time and use, create wrinkles. It doesn’t have the effect of a face lift or even an intense chemical peel. “Botox won’t change your life,” says Dugar, “but it surely can maintain you looking younger, which hopefully translates to feeling younger!”

8. And If People Do Find Out, They'll Probably Respond Like This...

I was so afraid of the negative judgment I might receive by admitting to getting Botox, but personally, I have not had a single person express that they think it’s frivolous or a poor reflection on my character. Actually, when I tell people I get Botox, often their first response is, “Omg, I want some!”

I’m not endorsing Botox by any means — all I hope to communicate is that if you are interested in it, that doesn’t make you a shallow, vapid human. Sometimes all we need is a little validation, so consider this a personal blessing from me to you: If you want to try preventative Botox, may you and your forehead go forth and live your best (and most *relaxed*) lives.

More like this
All The Products Hailey Bieber Used For Her Birthday Makeup Look
By Olivia Rose Ferreiro
This Scandi Beauty Brand Is Basically Hygge In A Bottle
By Justine Knight
10 Makeup, Hair, & Skin Care Gifts That Beauty Lovers Will Drool Over
By Erin Stovall
Kim Kardashian On The Beauty Hack That “Changed My Life, My Skin, My Confidence”
By Taylor Jean Stephan
Get Even More From Bustle — Sign Up For The Newsletter