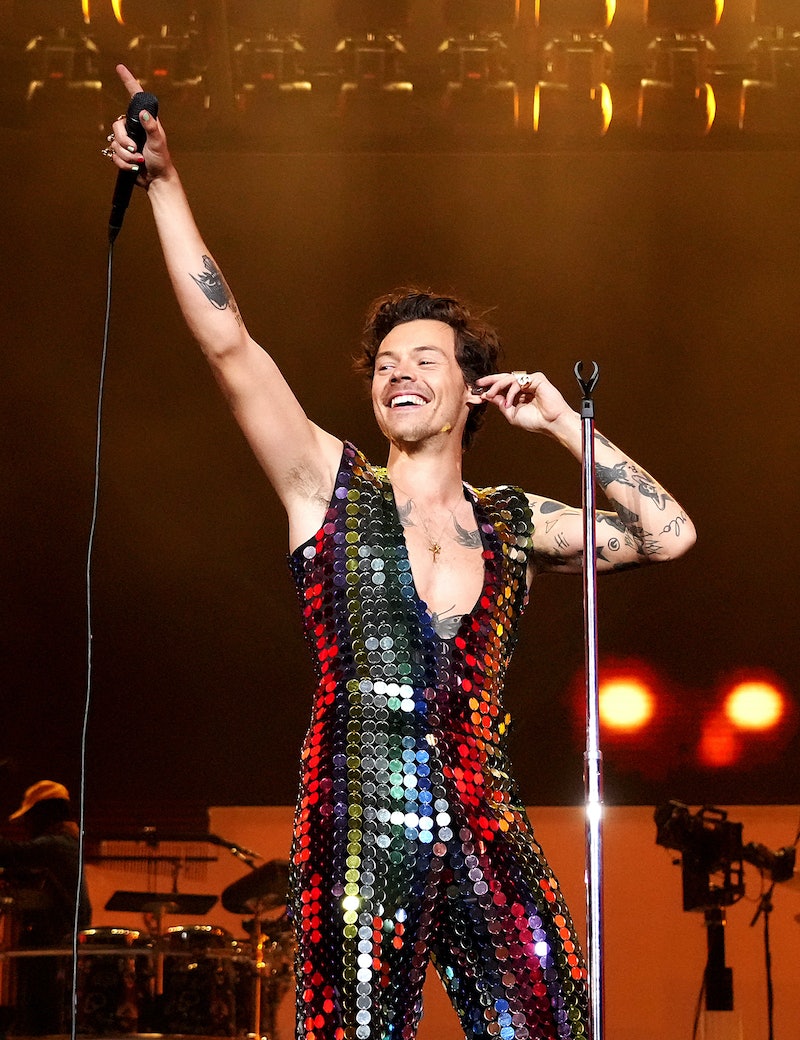 Harry Styles was one of the most-anticipated headliners at Coachella this year and though his concert looks never disappoint, these ‘fits went above and beyond. For both weekends, Styles chose outfits that would have made the disco-era greats proud. With metallics, embellishments, rainbow sequins, and oversized feathered coats, he made some bold style choices that deserve a standing ovation on their own.

Styles opened weekend one wearing a rainbow-striped jumpsuit made exclusively of light-catching paillettes. With a sleeveless silhouette, it boasted a deep V-neck that nearly reached his naval (hello, tattoos, nice to see you). Though he hit the stage cloaked in a black, feathered coat, it was quickly removed to show off the colorful one-piece in all its glory. Per usual, the “Watermelon Sugar” singer turned to Alessandro Michele of Gucci to create his custom ‘Chella getup. Even his band wore designs from the Italian fashion house, in denim boilersuits.

In contrast to his first weekend’s one-and-done jumpsuit, Styles stepped onto the stage for weekend two in a look that was practically made to be stripped off piece by piece — and that’s exactly what he did. Again, he began the show in a voluminous feathered creation, removing it to reveal head-to-toe fuchsia.

Decked in layers of metallic leather, the 28-year-old donned a cowboy-inspired look complete with hot pink pants, a vest, and a cropped jacket to match — also designed by Gucci. As his set went on, each layer was removed in a dramatic, Harry Styles fashion, and thrown into the air with dazzle. The best part, however? His initials, emblazoned in silver letters on each butt cheek.

With the singer’s “Love on Tour” still in full-swing (get tickets here) and his much-anticipated upcoming album, Harry’s House, there are sure to be many more looks where these came from. But there’s nothing quite like that festival vibe, is there?

More like this
The Louis Vuitton Cruise 2023 Show Was Full Of Chic Celebs
By Allie Fasanella
14 Spicy Bralette Outfits For Vaxed Girl Summer, Round 2
By Avery Matera
Kourtney Kardashian Got Married In A Heart-Stamped Mini Dress
By Allie Fasanella
Doja Cat Wore Surrealist-Inspired Schiaparelli To The BBMAs
By Dominique Norman
Get Even More From Bustle — Sign Up For The Newsletter