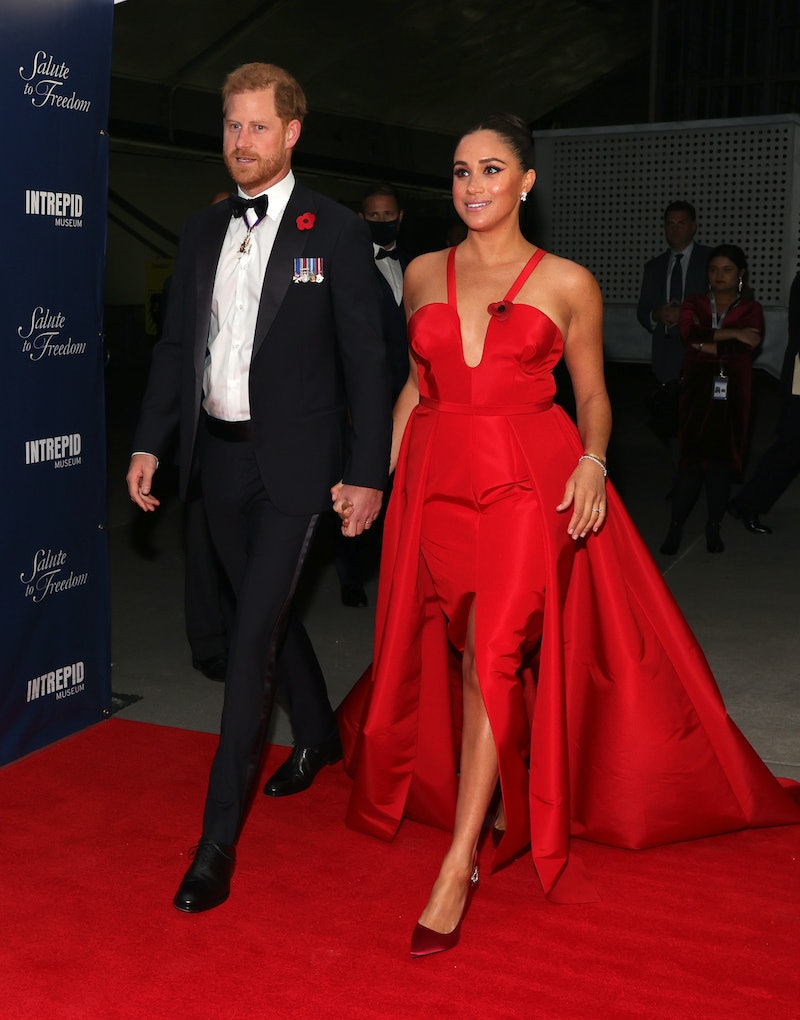 Meghan Markle and Prince Harry made their return to the red carpet with a significant event: a gala in honour of veterans ahead of Remembrance Day in the UK, as well as Veterans Day in the U.S. Their first major public appearance since stepping back from their royal roles, the couple dazzled at the 2021 Salute to Freedom gala at New York's Intrepid Museum on Nov. 10.

Prince Harry looked dapper in a streamlined tuxedo and bow tie, pinning his medals and the cross of the Knight Commander of Royal Victorian Order to his chest, while Markle chose an eye-catching red gown from American fashion brand Carolina Herrera.

Design by Wes Gordon, Markle’s red dress featured a plunging neckline and a thigh-high split, which she wore with crimson slingback heels, simple jewellery, a sleek up-do. The couple notably also wore poppies, which remain a poignant symbol of remembrance to this day.

While neither Markle nor the designer have commented on the exact meaning behind the dress, royal-watchers have been quick to comment on the significance of red, as the colour of the poppy, and a way of paying tribute to veterans.

Per Vogue, the dress choice marks a “new direction” in her royal style, thanks to its bold cut, daring neckline, and eye-catching colour. “With the palace dress code no longer a factor, the couple were free to embrace all-American glamour,” writes Janelle Okwodu. (Prince Harry joked about living the American Dream at the event, too. In his speech he said: “Just last week, I went for a ride on the Oscar Mayer Wienermobile – how’s that for living the American dream.”)

Okwodu notes that though the Herrera look wasn’t as “wild” as anything Miley Cyrus has worn, it was the overall look and feel that made and impact. “It was the combination of fiery crimson, satin Guiseppe Zanotti heels, and rock star-worthy black winged liner was worlds away from the subdued fashion Markle favoured before she and Harry stepped back from their official royal duties,” she wrote.

Markle’s use of colour, and red specifically, has been previously commented on as an act of defiance, per the Evening Standard, commenting specifically on the Safiyaa dress that she wore to attend the Mountbatten Music Festival back in March 2020. The show of strength, given the revelations relating to her court case with Associated Newspapers, certainly rings true for Grazia, too. The title says the voluminous Herrera dress “spoke volumes about her new situation in life,” hinting to the potential of a statement about no longer hiding in the shadows.

Prince Harry, who served in the British army for 10 years himself, presented the inaugural Intrepid Valor Award to five recipients. In his remarks, he thanked them for living their lives "defined by service, purpose and resilience."

"As many of us see it, service isn’t loud. Service is what happens in the quiet and when people aren’t looking," he said. "It’s about how we take care of each other every day. It’s about the camaraderie we share…the laughs, the comfort, the pain, the challenge, and yes, the banter.”

"You have experienced, seen, and dealt with things that few have had to—though the crises we are increasingly experiencing as communities are not only felt by those in the military world, but by everyone," he said. "Nevertheless, you are part of an everlasting bond. You are part of the team of teams. And we will always have your backs. You are not alone."