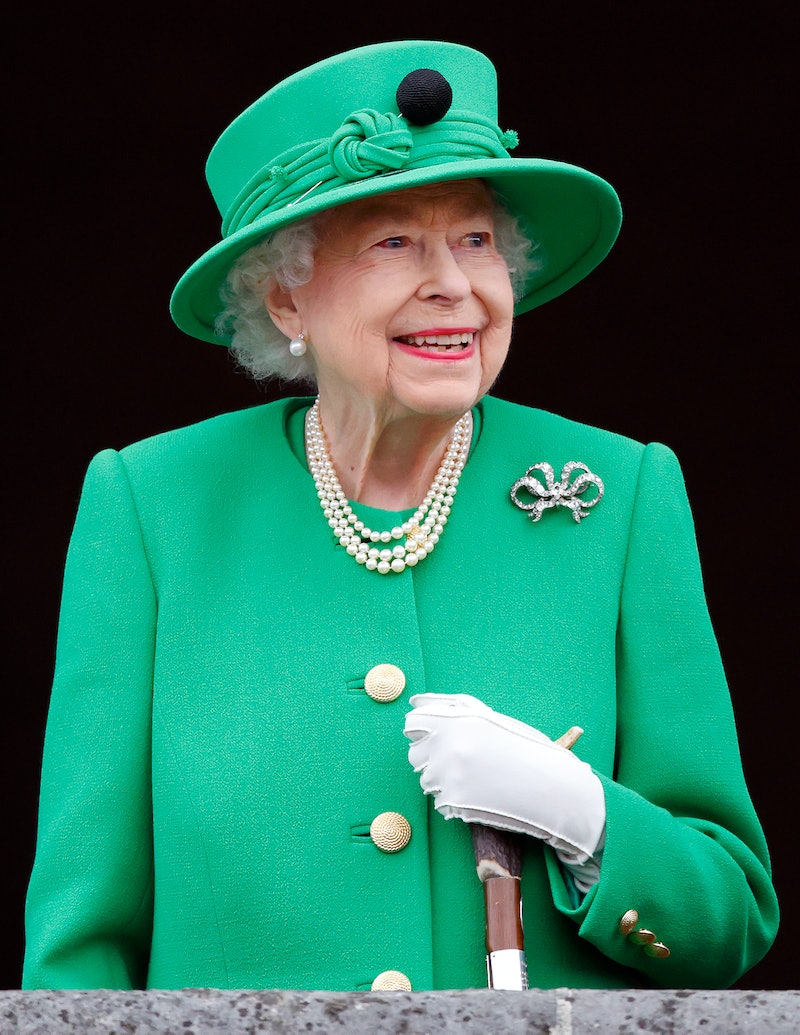 After an extra long weekend of Platinum Jubilee celebrations – and missing two key days due to health concerns – Queen Elizabeth delighted crowds by making a surprise appearance on the Buckingham Palace balcony. Standing alongside Prince Charles and Camilla, Duchess of Wales, the Duke and Duchess of Cambridge and their children, she looked utterly resplendent in a vibrant green double crepe wool dress and coat, designed by her dressmaker and designer Stewart Parvin, paired with an equally bright hat embellished with a black pom pom made by British milliner Rachel Trevor-Morgan.

Having designed a hat for Her Majesty for the first time in 2006, Queen Elizabeth has worn Trevor-Morgan’s creations on more than 60 occasions, as the Express reports. Working with Parvin and the Queen’s senior dresser and personal advisor Angela Kelly, Trevor-Morgan uses “sketches and swatches of fabric” to influence her designs. “She often wears a block colour coat and a beautiful silk dress with a print,” she told the Express. “We will most likely reference that print for the trim of the hat.”

As noted by Elizabeth Holmes, author of HRH: So Many Thoughts on Royal Style, on her Instagram stories, the colour choice may have been a nod to Prince Philip. Despite not being as dark as the Edinburgh Green shade used for his official livery, the option to wear green could be a tribute to her late husband.

The Queen matched her outfit with a pair of white gloves, layered pearl necklaces, pearl earrings, and a unique bow brooch initially owned by Queen Victoria. This brooch is one of three made by the 19th-century monarch in 1858, based on a set that belonged to Queen Charlotte. Victoria made her brooches “heirlooms to the crown” so they could be passed down from monarch to monarch. Queen Alexandra and Queen Mary wore one of the three broaches during their coronations, per Vanity Fair. The Queen Mother wore one as an everyday brooch. Queen Elizabeth has worn these brooches on many occasions and often loans them out to other women in the royal family.