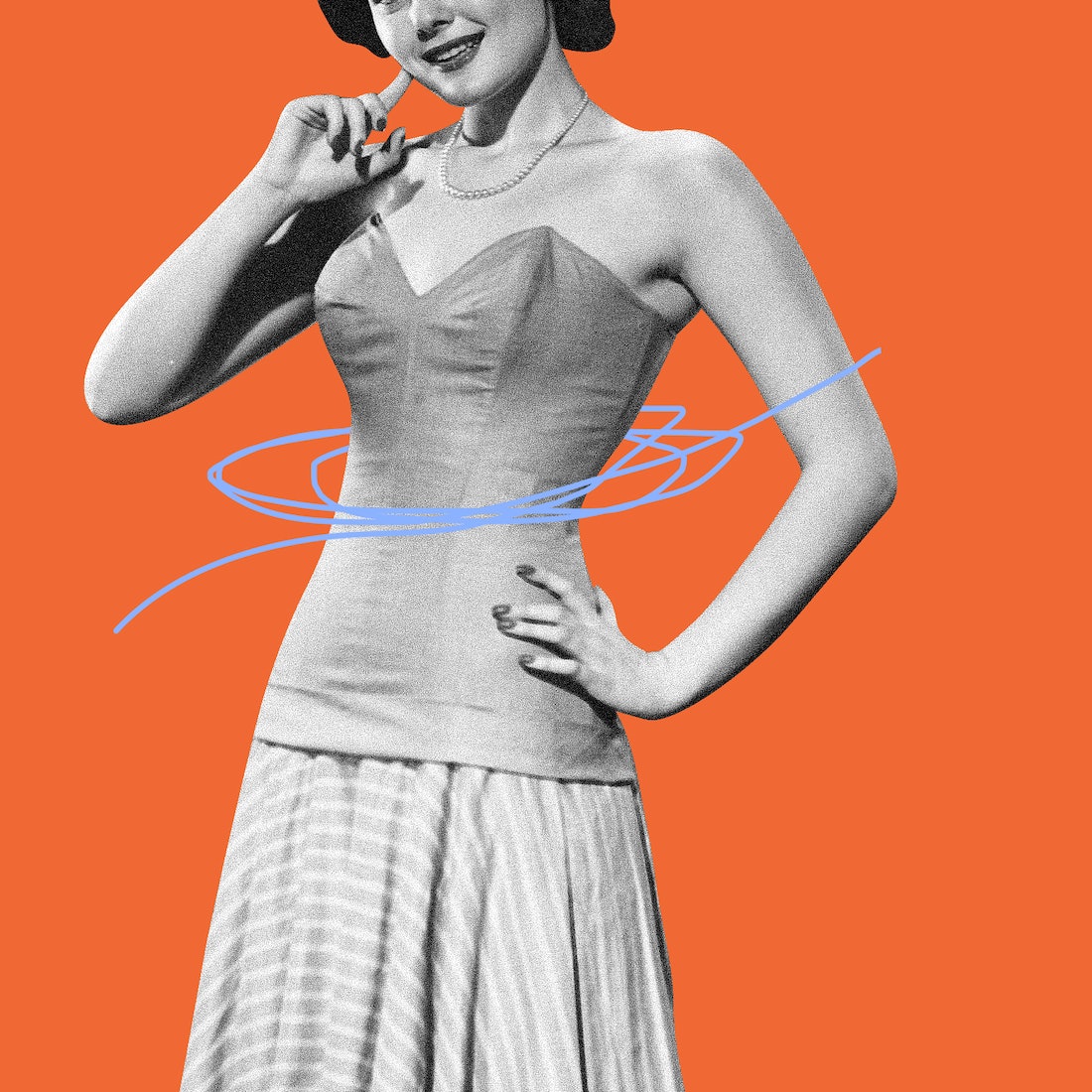 Growing up in the early aughts, so-called women’s magazines, read furtively in the library, were my religion. I was a true believer, zealously committing the good books — Seventeen, Cosmopolitan, and Marie Claire — to memory, storing away fashion tips like psalms for when I was old enough to be glamorous. One of these tips forever ingrained in me was to always dress for your body type. The body types in magazines messaged a desirability hierarchy like a cheerleading pyramid: three shapes were on the bottom — hourglass, pear, and round — while slim or “rectangle” was perched on top: the easiest to dress, the easiest to flaunt, the easiest to love. If your body went straight up and down, the sky was your fashion limit. If, however, your body stretched at the chest or hips or behind you, well, you had to learn a fashion lesson. There were strict rules meted out to us hourglass and pear-shaped girls. We had to cover our disgraces. For me, it was an early learned, frequently enforced disappointment. I did not have the “right body” — not for fashion, not for anything.

The “right body” nowadays looks very different. “The body type that was pushed through magazines and television for at least 20 years was definitely the [traditional] ‘model’ body type,” says Jeanette Jenkins, creator of the Hollywood Trainer Club and celebrity fitness coach. “Once social media started, for the past 10 years, I have definitely seen the scale tip the opposite way.”

In 2014, Vogue.com published a piece on big bottoms being, well, en vogue. The article caught heat for being late to the party and for erasing Black women (“Vogue Has Just Discovered Big Butts,” wrote Allison P. Davis at The Cut; “Why does a black butt only look good in white skin?” asked Yomi Adegoke at the Guardian), but the trend has continued to grow. Around the same time, board-certified plastic surgeon Dr. Arthur Perry noticed his clients beginning to request smaller breast implants, seemingly signaling the end to the “Barbie body.” What took its place was an exaggerated hourglass figure, something Maia Hoskin, Ph.D., race scholar and professor at Loyola Marymount University, connects with the rise of hip-hop culture. “If Jay-Z or Kanye West or whoever is saying, ‘I like a woman with a small waist and a big ass,’ now it’s become more permissible, more acceptable,” she explains. “That’s ushered in a new perspective of what is attractive and what’s not attractive.”

Fast-forward to today and the hashtag #hourglassfigure has more than 205 million views on TikTok. Scroll through and you’ll find workouts and challenges that promise to shrink and snatch your waistline, hourglass fitness challenges, and tips on how to pose in photos to create an hourglass shape. The hashtag #BBL (short for Brazilian butt lift, a fat-transfer procedure used to achieve a larger butt) has 3.7 billion views. It features transformations, before and afters, and, not surprisingly, a lot of Kardashian content.

And while most of the experts can agree, more or less, on when hourglass mania started, they all agree that actually achieving it isn’t something you can do through simple squats or crunches. Turns out, there are only two ways to get an exaggerated hourglass figure: You’re born with it already programmed into your bones and body fat, or you buy it (oftentimes at great risk).

In the plastic surgery route, the preferred procedure that will radically alter the shape of your body to an exaggerated hourglass is the aforementioned Brazilian butt lift. (There is also the much less common, more extreme procedure of fat transfer with rib removal — Perry strongly warns to avoid this at all costs, noting that “your ribs are there to protect your heart, lungs, and liver.”) But the BBL comes with its own set of risks. Perry explains that veins in our buttocks are very large, around the width of a 7-Eleven Slurpee straw — enormous when compared to our other veins. When fat is injected into the buttock area during BBL surgery, there is a possibility that it can enter the bloodstream, which is when the fatalities occur at a rate of about 1 in 3,000, even when the procedure is performed by a board-certified plastic surgeon.

Those are some very significant risks to be taking, so why are so many women game to try it? Part of the issue, as Jenkins sees it, is that not enough young people are aware that so much of how we look is predetermined, not just by our bones, but by how we carry fat, our hormones, and our genes. Fitness expert Tori Farrow, Ph.D., agrees, saying, “Many physical traits have already been developed in the womb before you were born. Some people simply don’t have the frame to carry [an hourglass shape].”

What’s especially disheartening is the way this pressure impacts the Black community. In the ’90s, having a large butt was firmly rooted in Black culture — a sign you looked like “one of those rap guy's girlfriends” — though Black bodies are often left out of the contemporary conversations. There’s a level of dissonance that occurs when watching others be applauded for doing something that was inherently part Black culture or embodying an asset that is naturally occurring in Black bodies. “Imitation is not always a form of flattery,” Farrow says. “It is nice to feel celebrated, but women in the Black community have to wait to be celebrated, which is so unfortunate because we have always been the epicenter of beauty.”

While plastic surgery, in general, took a dip in 2020, according to the American Society of Plastic Surgeons’ most recent data, buttock implants saw a 20% boost in popularity compared to 2019, while cosmetic augmentation among Black women has increased 56% percent between 2005 and 2013. Cardi B recently went public about the $800 buttock injections she received in a basement at the start of her career, which led to dizzying pain and leakage for days after her procedures. Even so, she made an appointment to go back. “But by the time I was gonna go get it, the lady got locked up ’cause she’s supposedly killed somebody,” she told GQ.

In all this we need to remember that Black women are not a monolith. “We all don’t have the beautiful big booty and voluptuous curves,” says Jenkins, and that’s OK. If you don’t want the treacherous risks that are associated with such an unregulated field of medicine, you could work on your body type the way the bodybuilders do: with an intense understanding of your somatotype. Jenkins uses Venus and Serena Williams as an example. “They’re two sisters who came from the exact same parents who have completely different [body types],” she says. “We can see that Venus is taller, longer, leaner because that’s how she was born, and we can see that Serena is much more muscular and also more voluptuous. They trained exactly the same for their entire lives, and they still have their own unique body types.” She notes that with Sheldon’s classification, Serena is a meso-endo body type (half naturally muscular and half full-figured) while Venus is an ectomorph (naturally slim). The takeaway? You can do every single type of training regimen that you want, but your end results will differ from someone who has a different body type.

But Jenkins doesn’t want to discourage anyone from working out. Say you do want a bigger bottom. A trainer can help you get there, but it will be through a series of intense, trainer-led, heavy weight-lifting workouts — not one-minute TikTok videos. And there are limitations — exercise can help tone and lift, but won’t magically alter the width of your hips or suddenly boost your butt by several sizes. The key to a healthy workout approach, according to Jenkins, is a bit of self-acceptance. “It’s perfectly fine to say I want my waist to be leaner or I want to get stronger glutes, but accept what your genetic limitations are, and tell yourself, ‘That’s the best it’s going to be and I’m good with it, and it’s beautiful,’” she says. “People will train, but as soon as they choose not to accept their genetic makeup, that’s when they’re in pain.”

At the end of the day, there are many roads you can travel that will bring you to some approximation of the hourglass figure, each with its own tolls — financially, mentally, culturally, physically. But maybe there’s another option. Maybe we throw out the old “dress for your body type” quizzes that break our bodies down to bones and body fat, breasts and butts, and reject the idea that there is only one “right” type of body to achieve. Maybe we accept that the current body “ideal” is no one’s body — not mine, not yours, not theirs — and cut ourselves some slack before booking an appointment. In accepting that your workout can’t magically give you an hourglass figure, let’s also remember that a workout can do something surgery can’t promise: make you feel good (yup, it’s scientifically proven).

After all, Jenkins reminds us, “At some point, you’re still going to have to look in the mirror and face the fact that you are you.” And when that happens, I’ll take endorphins and self-love over an “ideal” body any day.